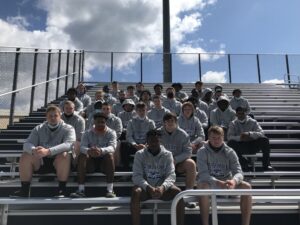 The 2021 Pennsylvania Big 33 team held their first practice at Bishop McDevitt’s Rocco Ortenzio Stadium on Sunday, and nobody has worked harder thant PSFCA Executive director Garry Cathell to make this game happen. “It’s been a long, difficult road. “Obviously there’s still a lot of covid issues out there and as we were putting the game together we didn’t know what the protocols were going to be, we didn’t know what our sponsorship situation was going to be like. But we feel like we can still give the kids on the team a quality experience.

When the players arrived they got their gear, their picture taken and then it was time for them to have their hearts checked. Julie Walker has led the charge for teh Peyton Walker foundation and her hard work was rewarded when Peyton’s Law was passed last July. This was the second time the team was tested for heart issues.

Players got to have a heart screening 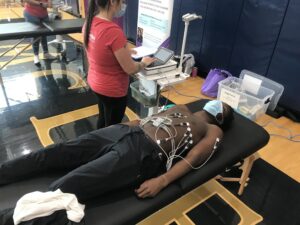 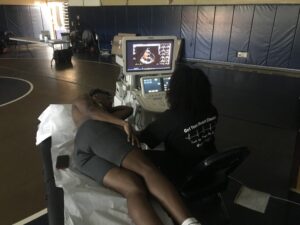 Then it was off to the playing field where, finally, Athens head coach Jack Young would finally get his Big 33 head coaching stripes. But first, the players and parents were greeted by the Big 33 staff and received their instructions and information on what they can expect. Cathell asked them to represent the state, their schools and parents with pride and dignity.  Then it was time to meet the Honorary Chairman of the game, former Big 33 participant, New England Patriot and Superbowl player Todd Rucci. Rucci told them to “remember every snap. This isn’t coming back.”  Darnell Dinkins, who played for the Browns, Ravens, Giants and Saints in the NFL also had some kind words for the players. He told them it’s all about “focus and family”.  Both Rucci and Dinkins have sons playing in the game, Khalil Dinkins and Nolan Rucci. 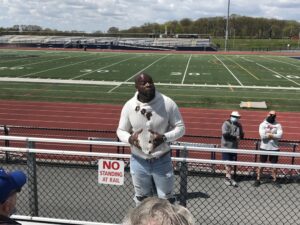 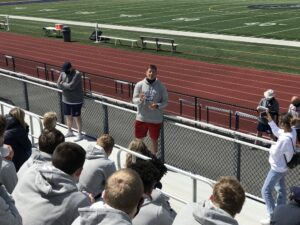 If that wasn’t special enough for the players, they then finally got to meet their coaching staff for the next 6 weeks. After a lunch period it was finally time to get on the field and put in their first workout. Central York wide receiver Judah Tomb said the moment “means everything to him. I’m ready to represent my team.” He’s also looking forward to working with and getting to know the other players.

As for Young, who’s father was also a Big 33 head coach and he played in the game with his father, “It’s, you know, personally  it’s just something I’ll get to keep in my back pocket forever. You know, my family is important, it’s huge for me”  “Wow! Just wow! We’re asking them to think about football with all the things going on who stuff really well and it was fun. It was fun we see towards the end a little competition, one on one stuff and if you watched any of it or not immediately you can tell why these guys are here.”

The Big 33 game will be broadcast on tv in select markets by Sinclair broadcasting and you can watch the exclusive livestream of the game right here on PAFootballNews.com.  Kickoff is set for May 31 at 1pm. 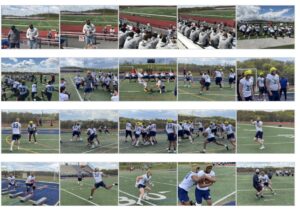