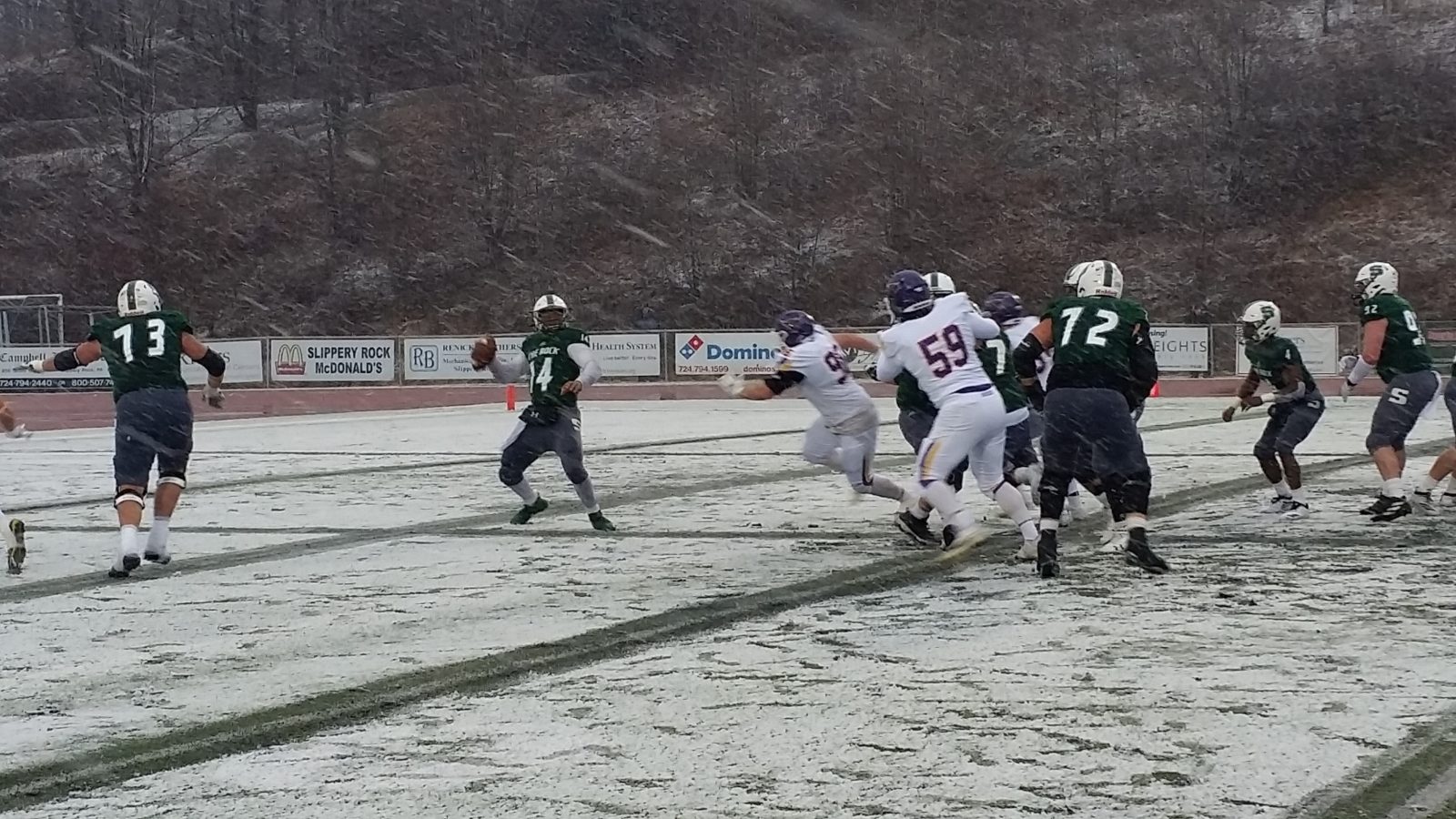 Slippery Rock saw its magical season come to an abrupt halt as the Rock was rolled over 58-15 by Minnesota State in the Division II semifinals Saturday afternoon.

“I should be happy with the season we had, but we got our butts kicked in every facet of the game today,” said Slippery Rock head coach Shawn Lutz. “Offensively, defensively, and special teams, we just got beat. No excuses, I give all the credit to Minnesota State. They’re a great football team.”

The Mavericks were dominant in all aspects of the game, gaining 463 yards of offense while holding the vaunted Rock offense to just 15 points. Slippery Rock had averaged nearly 49 points per game coming in.

“This was a great day for Minnesota State and Maverick Nation,” said their head coach Todd Hoffner. “Our players played very hard, and I thought Slippery Rock did a nice job. This was a very competitive game for a long time.”

Slippery Rock would respond as they marched 73 yards in 12 plays tying the game on Rivers’ 19-yard touchdown to Henry Litwin.

The Mavericks would again answer with Gunn’s 12-yard scamper.

Minnesota State then pushed their lead to 30-8 by halftime on Justin Arnold’s 20-yard run and Shane Zylstra’s 27-yard reception from J.D. Ekowa.

“We got the wind in the second quarter and started to gain some favorable field position,” said Hoffner.” We made some big plays that helped us pull ahead.”

Slippery Rock would get on the board again as Rivers and Litwin would connect for their second touchdown on a toe-tap 5-yard score in the back of the end zone with 8:4 to play in the third quarter.

Any momentum the Rock had was gone in 19 seconds as on the next play from scrimmage Ryan Schlichte darted a pass to Zylstra for a 73-yard touchdown.

“That hurt right there, we got a big score to get us back in the game, and then they score in one play,” said Lutz. “It’s hard to play catch up against a great football team.”

Zylstra had a monster game catching four passes for 152 yards and two touchdowns.

It would be the first of two 1-play touchdown drives for Minnesota State as Kaleb Sleezer ran 75 yards for a touchdown in the latter part of the third quarter.

Nate Gunn would also tack on his third rushing touchdown of the game from 11 yards out. Minnesota State led 51-15 after three quarters.

Despite the success of Gunn this season, Slippery Rock was able to contain him as he rushed 15 times for 54 yards with the three touchdowns.

The Rock defense, however, could not prevent the big plays in the passing game as Minnesota State’s quarterbacks Schlichte and Ekowa combined to go 10-of-16, for 250 yards and touchdowns while also tossing two interceptions.

“Defensively, I like what we did with Nate Gunn, but we couldn’t stop the big plays,” said Lutz. “We loaded the box to try and stop their ground game, and we were playing man-to-man outside. They made those 1-on-1 plays, and that hurt us.”

The Maverick’s closed the scoring with Nyles Williams 12-yard run with 8:50 to play.

For Slippery Rock, they close the best season in school history at 13-1 one game shy of the National Championship. It marked the school’s first 13-win season and first trip back to the semifinals since 1998.

“I’m proud of the season we had and of my senior class,” said Lutz. “This is one of the best senior classes in school history. You can not replace guys like that. We’re all competitors, and we’re disappointed right now. I know that after today, it’ll sink in what accomplished this season because we accomplished a lot.”