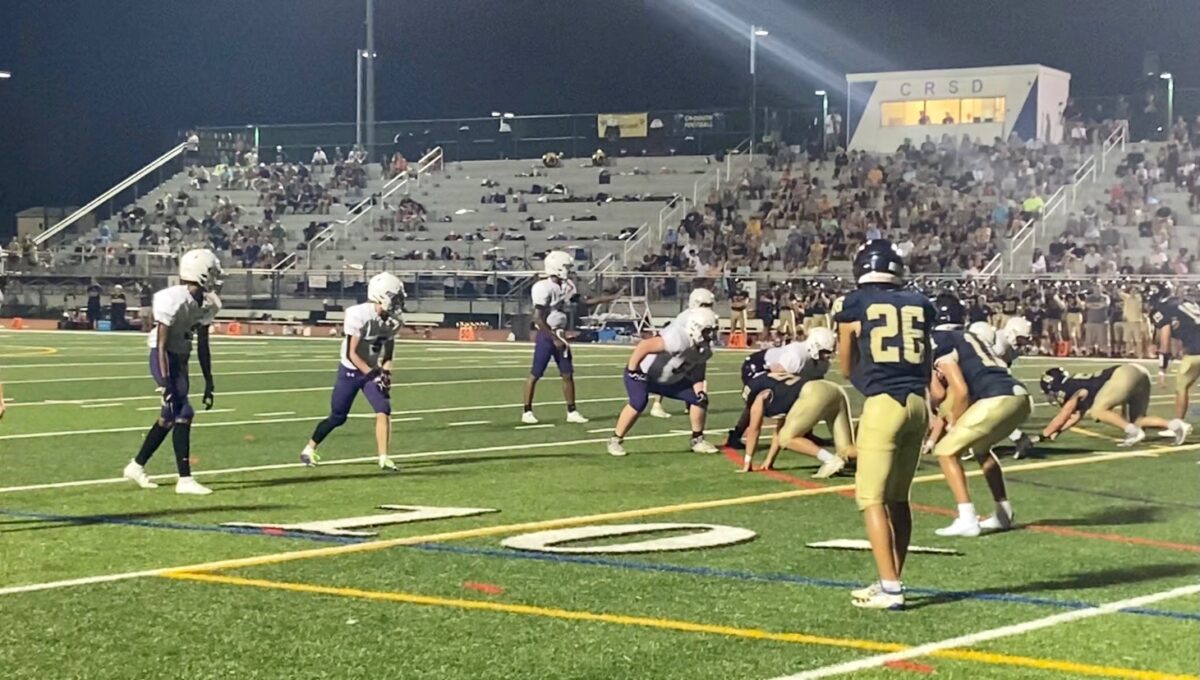 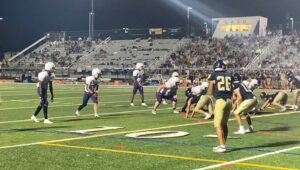 Upper Moreland (AAAA) (1-0) came into Walt Snyder Stadium on Friday night and slugged it out with host Council Rock South (AAAAAA) (0-1). The defending Suburban One-American Conference Champions handled their cross-county Suburban One-Continental foe 21-7 in what turned out to be a slugfest. The heat was affecting both sides as there were multiple stoppages for players with cramps. Regardless of the weather, throughout the first quarter each team continually came up big with some huge stops on defense. Upper Morelands’ Owen Dunleavy was all over the field and ended the night with a dozen tackles. The same could be said for Council Rock South Braden Kotter.

With 4:36 left in the first quarter the @UMBEARSFOOTBALL score first. A 14 yard pass from Byron Hopkins to Ryan Olexa @crsfootball @PaFootballNews pic.twitter.com/wwcEFR6l3b

With 4:36 remaining in the first quarter Upper Moreland’s quarterback Byron Hopkins connected with his wide receiver Ryan Olexa on a slant from 14 yards out to put the Golden Bears up 7-0. It wasn’t until 9:54 left in the second quarter when Council Rock’s Tom Woloshyn tied the game 7-7 when he bulldozed his way through the line from two yards out.

With just :04 seconds remaining in the half, Hopkins was stripped by Council Rock South’s Theo Christian, but Hopkins scooped the ball up rolled right and again found an open receiver in Stephen Broderick in the endzone. After a successful two-point Conversion the Golden Bears took a 15-7 lead going into halftime.

@UMBEARSFOOTBALL @ByronHopkinsJr1 rolls left with 15 seconds left in the half. He is stripped by a @crsfootball player but picks it up finds an open # 5 Stephen Broderick from 12 yds out for the lead at halftime. After a successful 2pt UM leads 15-7 @PaFootballNews pic.twitter.com/z2009lj2pu

Upper Moreland would put one more score on the board when Cameryn Jackson took the sweep around the end for a five-yard touchdown. Council Rock South would stop the ensuing two-point conversion to make the score 21-7 which would also be the final score of the game.

@UMBEARSFOOTBALL # 28 Cameryn Jackson runs it it and gives the Golden Bears the lead 21-7 with 1:26 left in The 3rd quarter. @crsfootball @PaFootballNews pic.twitter.com/mTYM9aC8H2

Hopkins ended the night 11-of-17 (64.7%) for 174 yards and two touchdowns in the win while running back Cameryn Jackson paced the ground game for the Golden Bears with 94 yards rushing and a touchdown. This win is definitely going to help build momentum for the Bears heading into next week.“We knew they were a 6A school coming in and that they weren’t going to let up. We had to make sure we were dialed in all week. We watched a lot of film; we practiced really hard and that translated to a win for us,” UM’s senior QB said.

Next week is going to be an emotional one as Upper Moreland will host Archbishop Ryan in a non-league game Friday which is a rematch from last year’s PIAA first round playoff where UM trounced Archbishop Ryan 35-0, and Council Rock South will be on the road at Upper Dublin for Friday’s conference opener.