Bison Swaim past Hornets to reach 3A semi-finals! @bedfordfootball @HSD_Athletics 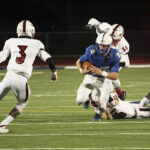 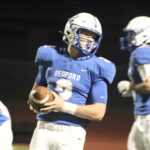 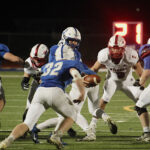 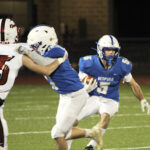 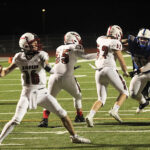 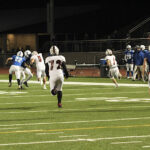 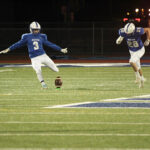 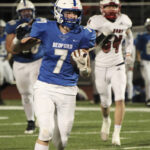 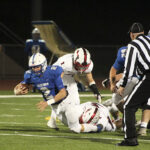 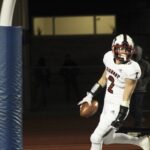 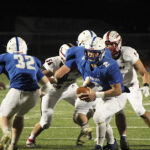 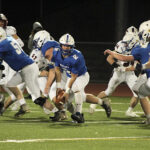 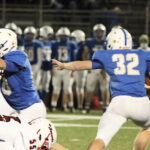 PIAA 3A Football Playoffs 2nd Round

Bedford’s offense was nearly unstoppable last night as they advanced to the 3A semi-finals next weekend. The Hornets kept stinging themselves in the foot all night. Hickory got the ball first and before they even ran a play they were called for delay of game. Three plays later they punted to Bedford. The Bison ran three plays and netted no yards and punted the ball back to Hickory. It was the only time all night that they would punt. The Hornets were able to pick up one first down before punting in back to the Bison. Senior receiver Gregory Edwards big punt return took the ball back to the Hickory 33. That’s when Superman arrived dressed like Bison quarterback Mercury Swaim. On third and eleven from the Hornet 34, he ran 22 yards thru the entire Hornet defense (see video my Twitter). Swaim would score from two yards out four plays later. The kick was no good and the Bison led 6-0 at the 3:44 mark of the first quarter. Hickory would muff the kickoff and be forced to start their next drive at their own 7.  They would drive 93 yards in eight plays, scoring on the first play of the second quarter to take the their only lead of the game. Hickory’s senior quarterback Michael Henwood who was averaging over 230 passing yards per game hit senior receiver Matt Cannone for a 46 yard touchdown. Freshman Lukas Jones point after made it 7-6 Hornets. Both teams now threw interceptions. Hornets junior Ramarion Whitehead picked off a Swaim pass and returned it to the Bedford 25. A holding call pushed Hickory back and on fourth and 16, Henwood was intercepted by Bison Connor Clarke to end the threat. The Bison starting at their own 5 drove 95 yards in 9 plays to take the lead for good. Swaim started the drive off with a 40 yard run to flip flop field position. Bedford senior running back Elijah Cook went in from three yards out. Lizzy Martz added the extra point and it was 13-7 Bison with 5:31 to go in the second. Hickory would come right back with Henwood completing a 43 yard pass play to start their next drive. Four plays later Lukas Jones kicked a 31 yard field goal on fourth and four. The Bison would drive from their own 40 to the Hornet 8 before turning the ball over on downs with nine seconds left in the half. Bedford had used a timeout earlier in the half and this forced them to pass on third and one and again on fourth and one. Hickory nearly scored on the halves final play with a hook and ladder that covered 62 yards.

Bedford would take the second half kickoff and go 74 yards in eight plays to double their lead.  The big play of the drive was a Swaim 35 yard run. Cook score his second touchdown from 12 yards out at 8:47 of the third. Hickory was called for a penalty, ran three plays and punted. Bedford marched right down the field again before turning the ball over at the Hickory 25. Hornet’s linebacker Rocco Iacino recovered the fumble. Henwood would run for 33 yards to put Hickory in Bison territory. But a holding call forced the Hornets into a fourth and nine from the Bedford 28 and Henwood’s pass was incomplete. Bedford would need only five plays to go 72 yards for another touchdown. On third down from the Hickory 44 , Swaim faked the handoff to Cook pull the ball back and ran down the right sideline for a touchdown. With 1:51 to go in the third quarter the Bison led 27-10. Hickory would start their next drive with a 42 yard pass completion by Henwood but a offensive face mask would push the ball outside the red zone. The Hornets were able to overcome this when Clay Wiesen scored from two yards out in the first minute of the fourth quarter. The Hornets were now down ten and elected to kick deep instead of going for the onside attempt. This would prove to be a mistake. They were once again unable to stop the Bison. Bedford would go 60 yards in twelve plays taking seven minutes and 19 seconds off the clock. They actually gained 70 yards as they overcame a holding call. Cook would score this third touchdown with 3:47 to go. Martz extra point made it a three score game. The next minute and 47 seconds had four penalties, a couple of first downs and finally an interception by sophomore Ethan Weber. The Bison picked up one first down and took a couple knees.

Play of the Game- Bison quarterback Mercury Swaim played a great game.  The Hornets just were not able to get him on the ground without three or four players.

He knew when to keep the ball and when to hand it off. He milked the clock beautifully the final drive. The good news for Bedford is that he’s only a junior. He will definitely be playing at the next level.

Bedford will play Central Valley next weekend in one of the 3A semi-finals.