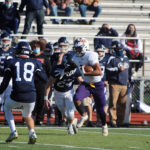 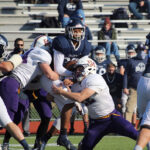 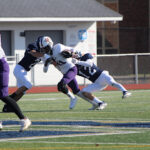 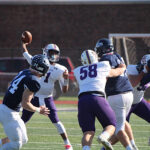 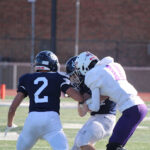 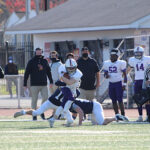 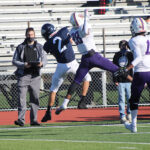 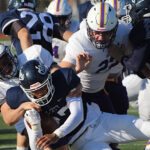 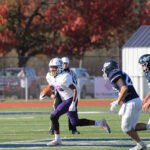 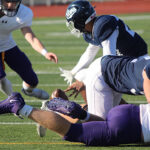 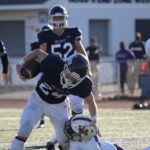 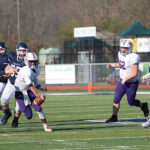 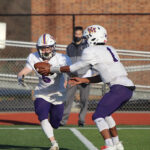 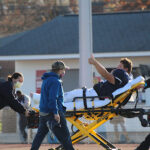 PIAA  4A Football Playoffs 2nd Round

Football games are often decided by a missed conversion or a turnover.

That was the case Saturday afternoon on a beautiful day from Hollidaysburg’s Tiger Stadium. Oil City was able to advance in the playoffs with another one point victory this time over Upper Moreland. The Golden Bears ran only three plays on their opening drive. The first was a 21 yard pass play from junior quarterback Byron Hopkins to senior receiver Jon Knight. The third play was an interception of a Hopkins pass by senior back JT Stahlman at the Oilers 7. It was the start of a monster game by Stahlman. Oil City would manage four plays before punting it away. Three plays later Hopkins pass attempt was bobbled up in the air and interception by senior Sean Stack who ran the ball back to the Bears 29. On the next play senior quarterback Holden Stahl hit Stahlman in stride as he got behind the defense for the game’s first score. The Oilers went up 8-0 converting a wild two point play. Stahl pitched to Stack who swept to the left sideline looking for an opening, he couldn’t find one so he pitched the ball back to Stahl who had alertly followed the play. Stahl ran back to the right yelling orders and every lineman got back to the line of scrimmage and tight end Brayden Crocker found an open spot and caught Stahl’s pass. (Check out my Twitter- great job by the whole team!-and when you win by one point a game changer!)

UM would answer right back going 71 yards in three plays using just a minute 38 seconds. The first play was a 38 yard run by junior Cameron Jackson. Jackson would end the game with 116 yards rushing on only 13 carries. The third play was a perfect pass from Hopkins to senior receiver Jahaire Johnson. Bears coach CJ Szydlik chose not to chase the points and Jared Meehl added the point after. It was 8-7 with 5:02 to go in the first quarter. Oil City went three and out and punted. UM’s next drive lasted four plays as they were unable to convert a fourth and eight from the Oilers 41. Oil City who fumbled eight times last week started their next drive with a fumble, but recovered. Three plays later they punted. Jahaire Johnson came up big again this time with a punt return that took the ball to midfield. It took the Bears a total of four plays to score, two to get to the five and two to score. Hopkins hit Johnson for his second touchdown and it was 14-8 Bears. Oil City would come right back now with an 82 yard drive that took nine plays and five and a half minutes. The big play was an offside by the defense on fourth and three from their own 37. Three plays later Stahl tired the hard count again. This time his team jumped. On third and nine Stahl hit Stahlman on the right sideline. Stahlman jumped up took the ball from two defenders came down and raced down the sideline for the 57 yard touchdown. The two pointer made it 16-14 Oilers. UM would use up the final three minutes and 41 seconds of the half on their next drive. Hopkins would throw the ball deep into triple coverage as the half expired, the ball fall incomplete.

Both teams started the second half with three and outs. The Oilers second possession started inside their own ten and last weeks fumble issue returned. Junior Colin Hogan recovered for the Bears and they were in business. Hopkins would score three plays later and it was 21-16 Bears with 6:16 to go in the third quarter. That’s when the Oilers offense changed. All game they had tried to get yardage to set up the pass and than hope for a big play. They used multiple running backs just like last week and were having problems holding on the the ball. The rest of the game every carry was by Sean Stack or Holden Stahl and the offensive line seemed to respond. Oil City would take the lead back with a 73 yard drive that lasted into the fourth quarter. The 15 play drive would take almost eight minutes off the clock. The Oilers overcame multiple third downs, a penalty and a bad injury to one of their players. Stahl would muscle it in from one yard out and Oil City was up by one. UM would come right back going 56 yards in just 64 seconds. The big play was a 40 yard run by Jackson who capped the drive with a short touchdown run. After kicking extra points all day, the Bears decided to go for two and make it a seven point game. The pass fall incomplete. Oil City would pick up one first down but facing a fourth and seven from their own 48 elected to punt. The Bears starting at their own 20 went backwards and were forced to punt. The big play was a holding call on first down. The bad part of the drive was it took only 50 seconds off the clock. After the punt the Oilers were 60 yards away with just six minutes to go. The drive started badly with a holding call. But then Stahlman did it again he beat the corner on an out with a double move got by the safety Johnson and was finally tackled at the UM five. (See my video on Twitter) The Bears didn’t make it easy as it took Stahl and the Oilers three tough plays to get into the end zone. The Oilers were back up by one with exactly four minutes to go. Two plays later Hopkins pass was intercepted by senior Dakota Cole. The Oilers were able to run out the last 3:09 and two Bears timeouts by converting a fourth and two from their own 43 on a smashing run by Stack. Just a great high school football game by two well coached teams.

Players of the Game

Upper Moreland-Jahaire Johnson had two touchdowns, played well on special teams and came up hitting from his safety spot.

RB Sean Stack just got one or two extra yards on every carry. He needs to carry the payload next week.

Oil City will play Thomas Jefferson for a spot in the PIAA 4 A championship game.