Pribula, Tomb Too Much For Del Val In 6A Playoff. 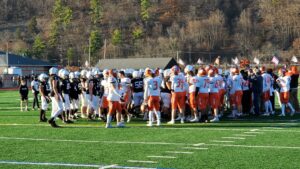 MILFORD- The Del Val Warriors came into their game Saturday afternoon withe District 3 champion, Central York, knowing they had to control the tempo and limit any mistakes against the high-octane Panthers. In the first half was mission accomplished as the score was tied at fourteen at intermission, but then Central York erupted for 35 points and will advance to the PIAA 6A semifinal with a 49-27 victory.

After a scoreless first quarter, Del Val got on the board with a 17 yard pass from Aiden Oliver to Jason Henderson on the second play of the second quarter. It would be the first of two scores the duo would hook up for in the contest.

York Center would tie the game at seven on their next drive as quarterback Beau Pribula connected with Judah Tomb for a six yard pass with 9:01 remaining capping a five play drive.

The Oliver to Henderson connection snatched the lead back for the Warriors at 14-7 with a 27 yard scoring play with just under four minutes left. The Panthers evened up the score as Pribula hooked up with Tomb for 22 yards with 1:30 left in the half.

Pribula to Tomb 22yds on 4th and 2 for @centralyorkFB score. We are tied at 14 1:30 till half @PaFootballNews pic.twitter.com/3wovEp6xKb

Cental York took it’s first lead on a one yard Pribula score with 9:53 left in the third quarter, but the extra-point was blocked leaving the score at 20-14. Pribula’s score was setup by a 62 yard run by Isaiah Sturgis.

A Sturgis fumble, gave Del Val possession in Panthers territory at the 44. Using a punishing ground game they moved the ball to the five. Paulie Weinrich cashed it in and with the PAT making it a 21-20 for the home team.

After an exchange of possessions, Del Val was forced to punt the ball away, and that’s when lightning struck as Tomb took it at his 18, found a seem, broke a tackle and scampered to the end zone, with the two-point conversion made the score 28-21.

Tomb, was not done as he rumbled with another punt for 37 yards to that led to a thirteen yard score by Pribula to cushion the lead at 35-21 on the first play of the final quarter.

A Oliver pass was picked off by Taylor Wright Rawls setting up the Panthers deep in Warriors territory. Pribula capped off that drive with a 1 yard score to make it 42-21.

Del Val, temporarily stopped the bleeding with a three yard score by Weinrich,but on their next drive Pribula dashed in from 75 yards for the final margin of victory.

Central York(9-0) will meet Erie McDowell, who has yet to play in the playoffs as they have advanced on Covid-19 cancellations.