St. Joe’s Prep Continues Its Dominance on the Way to Another State Title 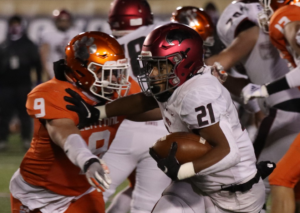 Another game for the Hawks, and another same result. But this time, St. Joe’s Prep issued a trouncing to the Central York Panthers during the PIAA 6A State title game in Hershey, en route to the Hawk’s 4th straight Pennsylvania championship.

The game was out of reach by halftime with a score of 38-7, but St. Joe’s kept their starters in as players chased individual yardage and touchdown records to the final score read 62-13.

From the opening kick and onward, Central York had no answers for St. Joe’s wealth of offensive talent, as the Hawks racked up 82 yards on the ground and an impressive 392 yards in the air. Six different players scored for St. Joe’s, and Kyle McCord continued his dominance by throwing four touchdown passes. Offense came via passing, rushing, special teams, and trick plays.

Led by junior Quarterback and Penn State commit Beau Pribula, Central York entered the game averaging 53 points of offense per contest. But the Panthers couldn’t get anything going against the stout St. Joe’s defensive, even without star linebacker Jeremiah Trotter.