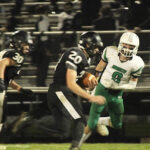 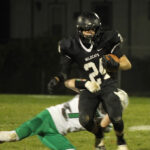 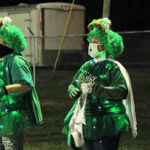 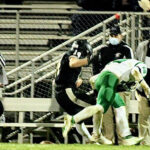 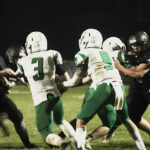 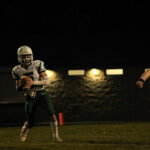 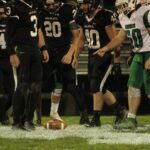 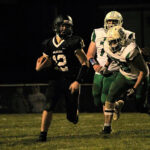 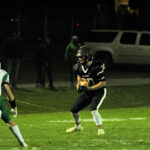 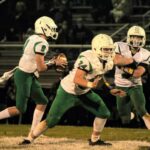 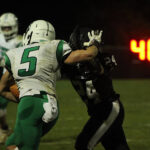 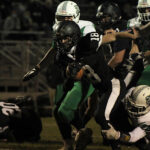 The last two teams to beat Bishop Guilfoyle in a District VI playoff game battled Friday night for a berth in the championship game next week against the Marauders or Purchase Line depending on tonight’s winner.  The game started out like a track meet.  HC went 55 yards in six plays to start the game with senior quarterback Ben Schmidt capping the drive with a two yard touchdown run.  JV got the ball and went 65 yards in six plays with senior quarterback Hunter Johnson hitting senior receiver Jake Johson on a 36 yard touchdown pass. The Wildcats would go 62 yards on their next drive in eight plays. Homer-Center had help from a personal foul on the Hornets, who had penalty issues all night. Schmidt converted a fourth and three with an eight yard pass to senior receiver Travis Mock. One play later Schmidt hit senior Drew Kochman for the first of this two touchdown catches. The Wildcats were back on top 14-7. The Hornets would come right back driving 63 yards in 7 plays. The Hornets junior running back and leading rusher scored from 11 yards out and the game was tied again with 1:41 to play in the first quarter.

After both teams scored 14 points each in the first ten plus minutes there would be only 13 points scored in the final three plus quarters. HC drove inside the JV 30 thanks to a defensive pass interference, but Schmidt was sacked on third down and the Wildcats punted. The Hornets would then drive inside the Wildcat 20. The big play was a third down 47 yard screen pass from Johnson to Rand. Rand nearly scored on the play. The Wildcat defense toughen and stuff the Hornets on fourth and four from the 14. Homer-Center would go 86 yards in two and a half minutes again aided by a pass interference. Schmidt once again hit Kochman for the touchdown. Juniata Valley went three and out and punted. HC ran one play and went to the locker room up 21-14.

The Wildcats tried an onside kick to start the second half, it would have worked but it only went eight yards. The Hornets picked up a first down and appeared to have a second one, but a holding call put them behind the sticks. Wildcat sophomore back Michael Krejocic who was beat on the touchdown pass came up with a big interception to stop the drive. The Wildcats who had no problems moving the ball all night again went on a long drive. They drove to the Hornet 27 before Schmidt’s fourth down pass fall incomplete. Schmidt broke the school record for career rushing on the drive passing up Jesse Lee. The drive used up over four and a half minutes. The Hornets ran four plays and gained 19 yards before punting the ball back. Homer-Center would then go on a fourteen play 86 yard touchdown drive that would take over seven minutes off the clock. Schmidt hit Kochman on a third and ten for 36 yards to midfield. A great catch against the sideline. The Hornets gave the Wildcats two first downs by jumping offsides, one on a fourth and two. Schmidt would cap the drive at 9:23 of the fourth quarter with a six yard run. The Hornets got the ball one last time and drove deep into HC territory, but Mock intercepted a pass on the Wildcat 6 to stop the drive with just under six minutes to play. HC then had a third and six from their ten and Schmidt did it again with a 55 yard run down the left sideline. The Wildcats would pick up two more first downs while running out the clock. Final Wildcats 27 Hornets 14

Homer-Center will play the winner of tonight’s Purchase Line-Bishop Guilfoyle game next weekend for the District VI Single A championship at Mansion Park in Altoona.