In 2019, Washington High School had a dominant defense filled with numerous Division 1 and 2 prospects. Over the weekend, 3 of them would declare their college decisions. With star defensive linemen, Chase Mitchell, already signed to play for the Liberty Flames, three more of the talented senior class would declare. LB Isaiah Edwards and DB Caleb Jackson would boh declare to play football for the newly created Wheeling Cardinals. Defensive Lineman, Gerald Comedy will attend IUP on scholarship as well. With all of the loss of talent on the defensive side of the ball, Coach Mike Bosnic has decided to add more help on that side of the ball. In former Carmichaels defensive line coach and assistant coordinator, Chace Johnston. Johnston, a former D3 football player, and current senior at Waynesburg University, is entering his 3rd season of coaching experience. He will have a daunting task ahead of him, replacing the core of a talented defense with 6 new starters. I had the opportunity to talk to Johnston on the hiring, and how he plans to fill the gaps in the returning defense.

Q: Tell me your background in coaching, how playing in HS has prepared you for coaching at the D2 level and how that translates to the sidelines

CJ:I graduated from Mapletown High School in the fall of 2016, and was a 4 year letter winner in football and a two year team captain. I was a center on offense and a DE/MLB on defense. I also was a 2 year letter winner in baseball, 2 year team captain, and a 1 year letter winner in basketball and wrestling. I  was recruited to play football at Waynesburg University, where I played 1 season until a knee injury caused me to retire. I started my coaching career at Carmichaels 2 years ago. My first season I was the assistant OL/DL coach, I also helped with special teams a little bit, year two I was the head OL/DL coach, I also was the Junior Varsity Coach and helped with the defense. Playing in high school helped me because I know what it’s like to be both a player and a coach. I benefit from being only a few years out of high school by being able to relate to players in areas outside of football. When I played in high school, I didn’t think about why we do this on this play, or why does the defense line up like this. Now I have to look at things from every single angle.

Q: What will be your position on the defensive staff?

CJ: The defensive coordinator will still be there, they basically just added me to the staff as extra defensive help for this upcoming season. As for Carmichaels, they still don’t have a coach and I felt that I was passing up a great opportunity if I didn’t decide to leave. Leaving the kids at Carmichaels was the hardest thing to do, but it was time for me to go. 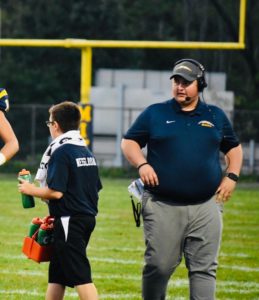 Q: How were you notified of the job? Did they reach out to you?

CJ: Funny story actually, during the season after the game between (Carmichaels) and (Wash High), we had a JV game on Monday where I called both the offense & defense for the game and we beat them. After the game I had my first interaction with Coach Bosnic and we talked about the game. Just small talk at first, then after Wash High went on their playoff run, I was notified by Carmichaels Head Coach Ryan Krull that he was resigning. So I started reaching out to a multitude of teams and coaches around the area like McGuffey, West Greene, and Mapletown. I even contemplated going to grad school at Saint Vincent to try to be a GA coach there. After the season, Bosnic and I talked about the opportunity of coaching with him and I felt like it was a great position for me. After a few months and a few offers, the Wash High one I felt like it put me in the best position to succeed and to further my career in coach.

Q: The Wash High defense was dominant against opposing teams last year, never allowing more than 28 points all year, how do you plan to replicate that success?

CJ: The defense was very dominate this past year, the group of players that we had all over on that side of the ball was phenomenal, it’s hard to replicate things year in and year out, all teams are different in their own little way. On (Wash High) we lost some really good players, but we have guys that are ready to step into those roles that will need to be filled. A great defense in 2A wins and finishes games. I feel like we can continue to build a dominant defense like we did this past year. 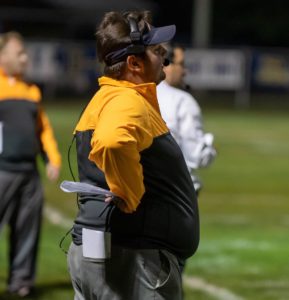 Q: You will be losing 3 D1-2 starters on the Dline, and multiple starters across the LBs and secondary. What strategies will you be using to make up for that lost production?

CJ: The guys that we are losing up front are players that you get every once in awhile. This past season I had the opportunity to coach and game plan against those guys, they caused problems for me and the Carmichaels coaching staff the whole game. When you have guys like that up front, it opens things up for the entire defense. We have guys that are ready to step into the roles that we lost after this past season. The standard is the standard at Wash High.

Q: Are there any returning athletes on the defense you are looking forward to coaching next year?

CJ: For me I look forward to the opportunity to coach all of the players on this team. After this past season I wanted to get out of Greene County and coach at a bigger school, the saying is that “when you coach at a Greene County school, you never leave.” I wanted to change that narrative. Some of the players I look forward to coaching are Zackary Doman, Isaiah & Steven Patterson.

Q:Mike Bosnic is a renowned head coach in the Interstate, winning his 100th game last season. How do you see your coaching style matching with his? And how do you think that will translate to the field?

CJ: Coach Bosnic is a legendary coach within the Washington Area. The way we think about things such as play calling, situational thinking, and how we are with the players are very similar. Where we differ a little bit is that he has more variety in his offensive formations to keep the defense guessing. At Mapletown, I learned from a power running game system, where it was run first, pass second. At Carmichaels I went from a power running game that I learned in Mapletown and WU to a zone running game, for me that was tough but I learned it pretty quickly, defensively we match up really good and that excites me. Coaching was something that I always wanted to do in my life, but I didn’t expect me to get involved this early. Im glad and thankful for these opportunities that I’ve got along the way! I look forward to what the future holds for me.