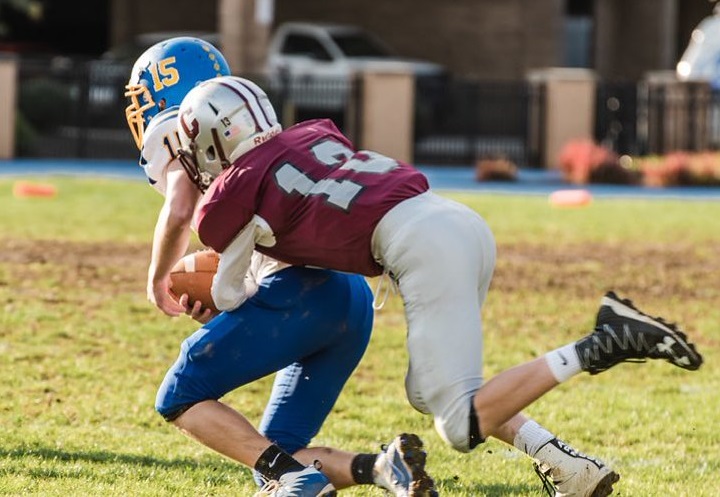 Why do you play football?

Who is your favorite sports star and why?

Michael: Mark Herzlich because he went to Conestoga like me and he played after beating cancer.

Do you have a favorite play you remember the most? Explain

Michael: My first play, it was surreal after dreaming of playing under the lights when I was younger.

What are your goals for this coming season?

Michael: To win as a team.

What is your favorite Pro team, any sport?

What game, yours, college, or pro, was your favorite game, and why?

Michael: 2017 NFC Championship, an entire city united and being there in person.

What sports movie would you watch every day if you had to pick one and why?

Michael: Bad News Bears, it shows you can do anything with hard work.

What cartoon character do you think your head coach most resembles?

If your mom and dad are screaming at you from the stands, what is it they usually yell?

Who is your mentor, the person you want to be like?

Name a sport you’d love to play but can’t?

What is your most embarrassing sports moment?

Michael: I was playing OT in peewee and I stood up for no reason before the play and got a flag thrown at me for it.

Is there anyone in your family, besides your parents, you could consider your biggest fan? Who, Why?

Michael: My Uncle, he supports me as much as possible from Colorado.

When you aren’t playing, practicing or training for sports, what is your go-to activity, and why?

What is your favorite football memory to date?

Michael: Blocking a field goal to win the 8th-grade championship.

What is your favorite play to run?

Michael: Any form of a blitz.

What scares you the most?

What was your favorite gift as a little boy? Why?

What restaurant is your go-to when you need a big meal?

Which one? Sheetz or Wawa?