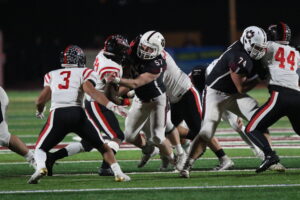 Garnet Valley will be facing off for the fourth time in five years for the District One 6A title. This has been a matchup where both teams are always playing each other in a District One Semifinal or Championship game. Coatesville is currently 3-0 against Garnet Valley and this will be the third time they have played each other at Moe DeFrank Stadium.

Coatesville has been very successful behind quarterback Harrison Susi. He has been a dual threat quarterback with 1,614 passing with 28 touchdowns and 1,217 yards rushing with 18 more touchdowns on the ground. So, he will force defenses to play more conservative and not be as aggressive. He has had a lot of help from wide receiver Tommy Ortega, son of Coatesville head coach Matt Ortega. Ortega has caught 26 passed for 406 yards and 13 touchdowns, so he has scored on 50% of the passes he has caught, a very impressive stat. On defense, they had one of their best games of the year against Ridley. They were able to shut down quarterback John Heller and star running back Tahir Mills. Coatesville has a lot of speed on both sides of the ball. However, this game they will have a much harder time bringing down the Jaguar offense. Coatesville is currently ranked #4 in the PFN ranking for 6A and has been a rising team in those rankings all year.

Garnet Valley will be playing their final home game of the season, and the final home game of Coach Ricci’s 35 year coaching career at Garnet Valley. This year, he has one of the best teams in the state and are currently ranked #1 in 6A in the PFN rankings. Garnet Valley’s offense had arguably one of the best games of the year against Quakertown. They put up 58 points against one of the better defenses in District One and looks to continue that pace against another high flying offense. Shane Reynolds and Max Busenkell are going to lead that Garnet Valley offense going into tomorrows game. Reynolds had 245 yards and three touchdowns last game having another career night. Busenkell was able to connect on a lot of passes, going seven for eight and throwing for three touchdowns. Joey Halloran has been getting a lot more receptions down the stretch of the season, scoring a 69 yard touchdown to put away Quakertown last game. On defense, that defensive line has been creating a lot of pressure in the backfield all season long. Against the rush, they have been able to stop teams for one or two yard gains a lot of this season. Like a lot of people say, “It all starts up front.” But, they are going to have their hands full this game with all the assets that Coatesville has on offense.