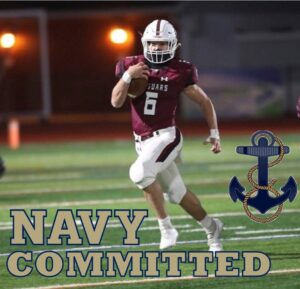 Shane Reynolds got offers from both Lehigh and Navy within the span of a week. In the end, he decided to commit early and jump on the offer from Navy. The rising senior just committed to Coach Ken Niumatalolo’s Midshipmen on Wednesday. This all comes on the heels of a spectacular 2020 in which Reynolds finished first team All-Central League for 6A. Reynolds was a large reason why Garnet Valley secured its third consecutive Central League Title. We caught up with him and asked a few questions about his decision to commit to Navy and other things as well:

What set Navy apart from the other colleges that recruited you?

The Brotherhood and the culture. Navy football is a lot like Garnet Valley where football is nowhere near the most important thing they do. While they are still super competitive and love to win games, they also want to see young men succeed.

What position did Navy recruit for you?

Navy recruited me mainly as a running back, but I’m lucky enough to have position flexibility where I might be playing linebacker or maybe even d back as well.

How much of a role did your family have in your commitment decision?

My parents have always been super supportive of me and no matter where I decided to go they would’ve been all for it.

What do you plan to major in in college?

Who is your role model?

I’ve been very fortunate to have many great role models in my life. Coach Ricci and the rest of the coaching staff comes to mind. I’ve been lucky enough to be able to work first hand with my position coachs’, coach Battiste and coach Wrez who have been great mentors to me, as well as coach Stroup who is my mentor for my senior year. I can’t say enough about each and every coach I am coached by.

What is your fondest memory from Garnet Valley football?

My fondest GVFB memory is summer camp. Nothing beats spending a whole week with 100s of your friends.

What do you want to do in your final season at Garnet Valley?

Everything. Me and the rest of my teammates have talked about this season for our whole lives and I just want to make it a reality this fall.

What’s one thing that no one knows about you?

I’m an avid disc golfer. It’s one of my favorite things to do with my dad. While I stay local at places like thorn berry and brandy wine, my dad loves traveling around finding new disc golf parks.

Has it ever crossed your mind to play lacrosse in college too?

It was a interest of mine for a long time but I never put as much hard work in developing my skills as I did for football.

What athlete got you hooked on football?

How has being a two sport player helped you with football?

It’s been very beneficial. One thing I never have to worry about is being conditioned.

Here is his Junior season highlights as well as the announcement by Garnet Valley that he committed to Navy:

Congrats to Shane Reynolds, GV Class of 2022, who has just accepted a scholarship to attend the United States Naval Academy, where he will continue his football and academic career. Very happy for you and very proud of you! pic.twitter.com/Txo7ogvAlS