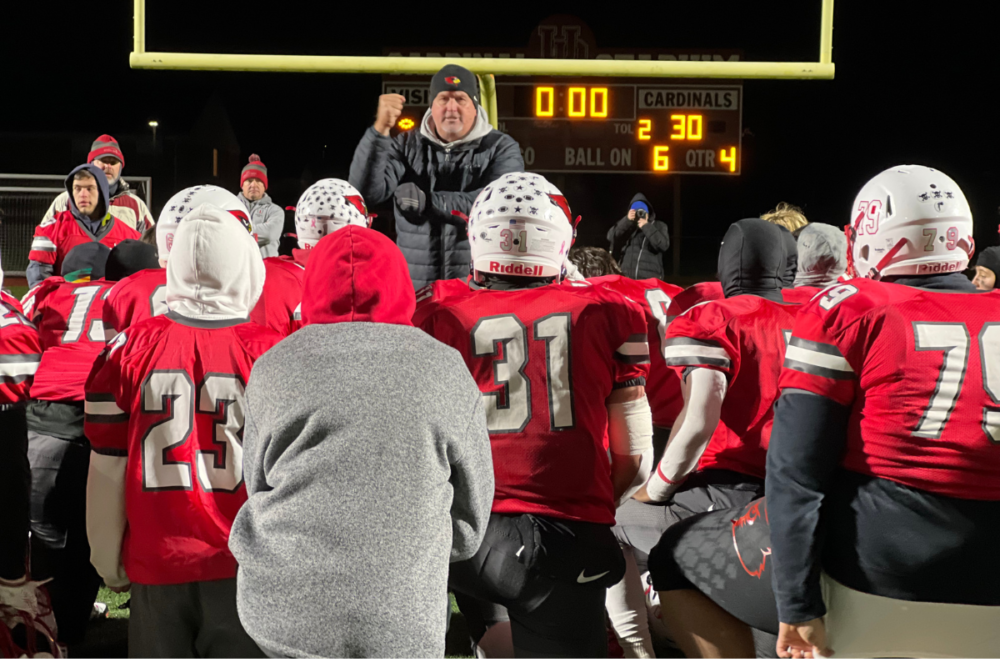 Fort Washington- “I was in Europe this summer, drawing up plays to stop PW,” explained a content Dave Sowers who is the defensive coordinator at Upper Dublin. That’s how long a loss can sometimes sit with you. Last season the Colonials ended the Cardinals bid for a state playoff run 42-36 in an overtime thriller in the district quarterfinals. Many of the same faces were out there last season and nobody forgot the outcome. Fast forward to last night and we had a much different outcome. The defense was just dominant. Sowers continued, “The one thing is, we go two ways, we don’t have two platoons, there’s no way we can say it was just the defense. it’s the same kids on O & D for us,” The big thing I think is this, I told them you can either commit to winning or you can commit to each other & if you commit to each other, we’ll go far.”  The team committed to each other, and the results have been outright stellar. In thirteen games this season the defense has surrendered 93 total points which is an average of 7.15 points per game. In the first three rounds, Upper Dublin has outscored their opponents 100-0. Three playoff goose eggs for those following along at home.

The weather was blistering to start the game as the first half saw a snowstorm effect the play of both teams out the gate. The first series for Plymouth Whitemarsh saw senior QB Aiden O’Brien fumble but recover the ball and ended with a botched punt that somehow punter Seve Spruill got off.   Upper Dublin took over and moved the ball quite well, but senior running back Nyfise McIntyre sprinted 19-yards & coughed it up at the PW 29-yard line to kill the drive.  Two plays after the Colonials took over however, Chris Kohlbrenner read the fake handoff well and planted Aiden O’Brien in the turf for the sack. PW would be forced to punt again. The next Upper Dublin series failed to yield any significant progress and they were forced to punt again. PW took over and had nothing as the UD defense smothered every attempt at forward progress. PW was forced to punt again. On the ensuing punt Upper Dublin’s Starling Reaves caught the ball at the UD 42-yard line and took off.  He weaved his way through to almost the 15-yard line when sophomore MLB Kevin Hegarty popped him so hard he fumbled, and PW recovered it at their own 11-yard line. At this point in the game the miserable cold weather turned into snow and fell hard and fast.  PW moved the chains slightly and even picked up a first down on a fake punt but again nothing would materialize for the colonials.

We headed into the second quarter knotted at zero with PW trying to move the ball in a torrential downpour of snow! Some might call this moment a true ball experience because nothing compares to a SNOW GAME.  PW was forced to punt yet again. Defensive hero Chris Kohlbrenner took the punt from his own 37 and was pushed out of bounds at the PW 40-yard line. The first play was a handoff to Nyfise McIntyre that only yielded a yard. Now facing second and nine from the 39-yard line Upper Dublin got to work. With snow pounding down, junior Shyne Roberts who usually lines up in the TE slot found himself behind the quarterback in the backfield.

@shyneroberts takes it 39-yards to the house. The PAT is good. 10:12 to go in the second. @UpperDublinFB 7@PWHS_Football 0@PaFootballNews pic.twitter.com/fa0dpEck5Z

Senior quarterback Colin O’Sullivan took the snap and handed it off, Shyne did what Shyne does best. He took the handoff up the B gap, and nobody could stop him as he raced 39-yards to the house to open up the scoring with 10:12 to go in the half.  After the PAT from Austin Pendleton was good the lead was 7-0. As I mentioned before the snow really began to fall and made things miserable on both sides.  Neither team could muster and points the rest of the half, and we went into the intermission locked at 7-0.

Upper Dublin deferred to the second half and received the ball to start the third quarter. PW’s defense wouldn’t break, only bend as the Cardinals would eat up a ton of clock and they would have to settle for an Austin Pendleton 27-yarder to extend the Cardinal lead to 10-0 with 4:25 to go in the quarter.

With 4:25 to go in the 3rd quarter kicker Austin Pendleton is good from 27-yards out. The lead is now 10. @UpperDublinFB 10@PWHS_Football 0@PaFootballNews pic.twitter.com/qN3vcusxQL

The next PW series ended in another punt and UD took over with only a few ticks to go in the third quarter.  The quarter would end with Upper Dublin gaining some momentum. As the fourth quarter began UD really started putting their foot down and moved the ball well. Short passes and runs pushed them into the red zone.  With 6:06 left in the game senior Colin O’Sullivan found senior wide receiver DJ Cerisier from 10-yards out for the score.

@Colin_OSullivan hits @djcerisier for the 10-yard TOUCHDOWN!!! The PAT was blocked but the damage was done. With 6:06 to go in the game the score is @UpperDublinFB 20@PWHS_Football 0@PaFootballNews pic.twitter.com/ECFcegdgkm

The PAT was blocked but the damage had been done as the lead extended to 16-0.  A few minutes later, on their own 36-yard line QB Aiden O’Brien heaved one up to Seve Spruill, but senior Griffin Pensabene picked it off and took it to the house for the pick-6. The Austin Pendleton PAT was good, and the lead now stood at 23-0.

@GriffinPensabe3 with the pick-6 with 4:56 to go in the Game. After the PAT the score is now @UpperDublinFB 23@PWHS_Football 0@PaFootballNews 👀🤯 pic.twitter.com/7gIfSdLPdh

The next series for PW ended in another fumble, this time at the hands of senior DL Nyles Bunn-McNeil. You would think, PW’s luck would change but it didn’t. They took over on their own 29-yard line & the very next play ended in a fumble recovery that was scooped up by senior Chris Kohlbrenner and taken in for another defensive touchdown.

FUMBLE!!! Picked up by @Ckohlbrenner20 and he scores!!!
The PAT is good and the lead is extended with only 2:12 to play. @UpperDublinFB 30@PWHS_Football 0@PaFootballNews pic.twitter.com/N0sgAQbCuU

After the PAT was good the lead was now a whopping 30-0 in the span of only a few minutes and only 2:12 remained on the clock. The last few minutes of the game didn’t produce much but a final sack from junior DL Martin Campbell as PW tried to get some points on the board but were unsuccessful.