While the District 10 Committee voted to approve new Region alignments for most of its sports during its Jan. 15 meeting in Sharon, football still remains in a holding pattern.

The football regions will be finalized once the PIAA hears Wilmington’s appeal. The Hounds objected to being moved from 2A to 3A after application of the Success Factor Formula and will take their case to the PIAA Board of Directors meeting Jan. 22. UPDATE: Wilmington won it’s appeal to remain 2A.

Regardless of the final alignment, there will be changes within D-10 football. DuBois is out-moving to District 9-and Kennedy and Butler are in. Kennedy is competing in varsity football again after playing a junior varsity-only schedule last year. Butler will become an associate member for football only, with all its other athletic programs remaining part of the WPIAL.
Butler took a circuitous route to become an associate member. The Golden Tornado made a request to the WPIAL to allow them to leave the district in football only to become a football only member of District 10. The WPIAL initially denied that request and Butler announced it would try to go independent in football. The WPIAL reversed course and sent a letter to D-10 supporting the move for Butler football as an associate member.

“The WPIAL was gracious enough to send a letter on our behalf, ” Butler athletic director bill Mylan told TribLive’s Chris Harlan. “Ithink the was a little misinterpretation on what exactly we wanted to do from the start. We’re still able to maintain our membership in District 7 and at the same time have associate membershipin football only with District 10.”
Under this arrangement, Butler remains a WPIAL school, but will have a D-10 football schedule and is eligible for the district’s playoffs. Harlan added the plan is for Butler to play its five D-10 games-three region plus two region crossover games-then fill its remaining schedule with five WPIAL teams.

The Golden Tornado have struggled to be competitive in the WPIAL. Butler has a record of 26-124 since 2004, hasn’t won more than four games in a season during that time and is currently riding a 20-game losing streak (last victory was Oct. 27, 2017 vs Canon-McMillan).

“We don’t feel like we’re going to go right to District 10 and make the playoffs,” Mylan said. “But if our program does improve this year, or next year or whatever the case may be, it’s nice to have that possibility. Our goal is to improve our program, but you sort of want that carrot to dangle in front of the kids.”

The football region alignment tentatively approved Wednesday differs from the proposal sent out Jan. 2. In that proposal, the district would contain five regions of mixed classes. Regions 1 and 2 would feature Class 1A and 2A teams, Regions 3 and 4 would have Class 3A and 4A teams and Region 5 would host Erie, McDowell and Erie Cathedral Prep.

In the alignment set at the committee meeting, Regions 1 and 2 would still have a mix of Class 1A and 2A teams, but Regions 3 and 4 would feature all the Class 3A teams, divided primarily into Mercer and Erie Counties. Region 5 comprises all the Class 4A teams. Region 6 is made up of Erie, McDowell, Cathedral Prep and Butler. Region 6 teams would get two games each from Region 5.
The new regions proposed at the meeting are: 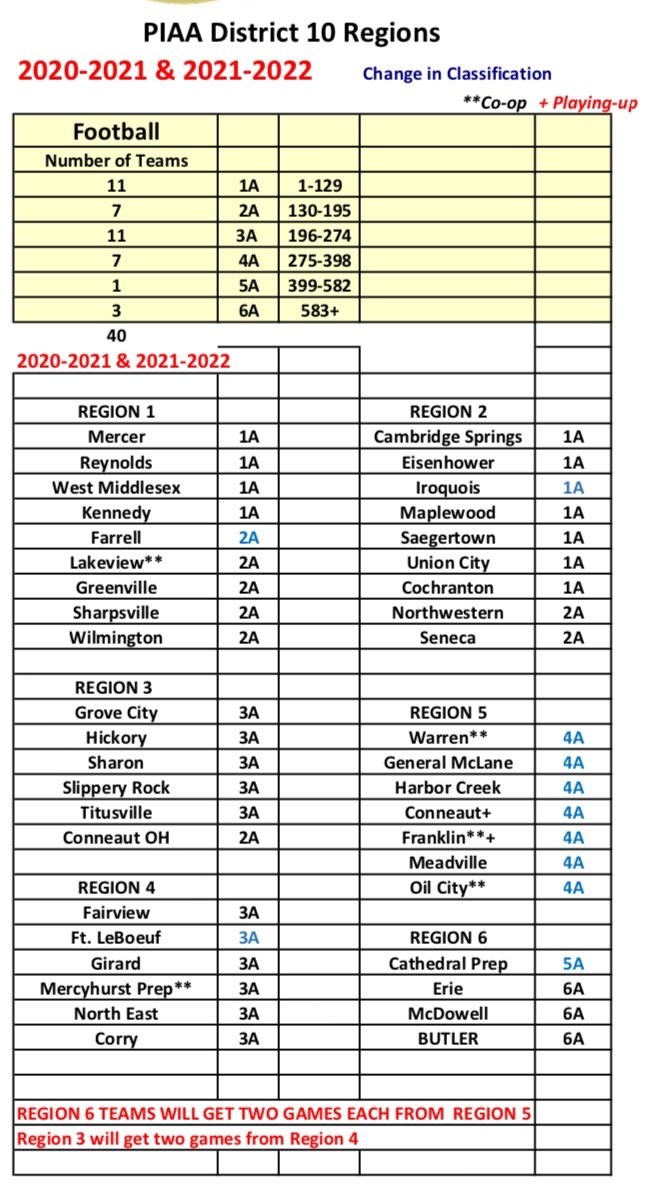