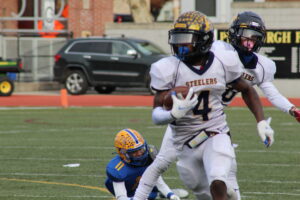 Summary: The goal for Farrell High School remains the same: make it to the state championship game. That was the only thing the 2021 Steelers failed to do, losing 27-18 to Serra Catholic in the state semifinals. Farrell outscored opponents 582-101 on the season while applying the mercy rule to all but three schools along the way.

Tailback Anthony Stallworth rushed for 2,340 yards and 30 touchdowns. Trian Holden split time at quarterback with Kabron Smith and completed 41-of-60 passes for 785 yards, 15 TDs, and 3 Ints. Omar Stewart Jr. caught 23 passes for 457 yards and nine touchdowns. Taidon Strickland led the team in tackles with 114. Dwight Allen led the team in interceptions with four while adding six receptions for 90 yards and a touchdown.

Conclusion: Farrell will win many football games and make another deep playoff run. Don’t be surprised if they’re in the state championship game. The Steelers are as talented as any 2A school in the state.

Summary: Greenville is looking to build off its first winning season since 2017. The Trojans went 7-4 last season, twice losing to eventual District X Champion Farrell, including a 60-14 loss in the playoffs.

Conclusion: The schedule hasn’t done the Trojans any favors this season. However, there is room for optimism as Greenville boasts many talented young players. How well they can replace Ritzert at quarterback and the 1000-yard season Swartz gave them on the ground will determine their success this year.

Summary: Grove City enters the 2022 season as the defending District X 3A Champions. The Eagles played revenge in the playoffs last season, defeating Fort LeBoeuf 35-21 and Slippery Rock 28-20, avenging losses to both the Bison and Rockets in the regular season. Grove City also quickly dispatched Fairview for a second time 42-7 in the opening round of the District X playoffs before succumbing to Central High School 35-6 in the state quarterfinals.

Conclusion: Grove City is as talented as any team in Region 3, same for District X 3A as far as skill guys are concerned. The Eagle’s challenge will require them to replace what they lost at the line of scrimmage. If they can pull it off, they’re more than capable of winning another District X crown.

Summary – Hickory comes off a 7-4 campaign that saw the Hornets advance to the second round of the District X playoffs last season with a 23-17 loss to Slippery Rock.

Conclusion: Hickory returns a lot of talent for the 2022 season. I expect the Hornets to contend for a District Title this season. While they need to replace their two leading receivers from a year ago, Hickory has plenty of young talent returning and coming up. Expect another big season from Logan Woods.

Summary: Sharon returned to the playoffs in 2021 with a 6-4 campaign that saw their season end with a 36-20 playoff loss to Hickory. The Tigers won three consecutive District X  Titles from 2017-19, advancing to back-to-back state semifinals in 2017 and 2018. Sharon had a disappointing 2020 season with a 2-5 record but will look to build off of last year’s 6-4 success.

Conclusion: Sharon should be able to put the ball in the end zone this season. Their question will be how their defense responds after losing their top four leading tacklers to graduation. Expect the Tigers to be back in the playoffs competing for District Crown.

It’s been a couple years since the Greyhounds have been a true contender but this year it looks like they’re a team on the verge of returning to greatness. But in this conference, it won’t be easy. “District 10, Region 3 will provide outstanding matchups for Mercer County football fans all season long. There will be no easy games. This region will be one of the most exciting regions both locally and across the state. We are looking forward to a competitive and exciting region schedule.”

Luckily for coach Brandon Phillian they return a large portion of last years team. Junior Tuff McConahy returns at QB, but they’ll need to replace top rushers Luke Edwards and Gage DeCaprio.  Ben Miller and Tyler Mikulin will see most of the carries. Another spot they’ll need to improve quickly is the O-Line. They return only two.

It’s the defense that will keep them in games early. Wilmington returns 6 players with starting experience. Davis Phanco and Carter Horkovy will lead a speedy and aggressive defense.

This is a team that will make some noise in D10. Larry Wendereusz has a pile of talent returning. Two year starter William Mokel thre for over 1100 yards and had 15 tds last year. John Sabo returns at the wideout spot. With three returning linemen, look for Maddox Allen and Galcik to improve carrying the ball. “Offensively, with a lot of experience coming back, we are hoping to be able to get off to a good start. We believe we will be able to run the ball better this season with 3 returning offensive linemen back and two other guys that saw time last season. We have 3 or 4 running backs that will see time this season behind the line. With a 3 year starter at quarterback, we believe our passing game and RPO game will be better this season. Our wide receiving core brings a lot of speed and versatility.”

Defensively the Rockets bring back three linemen that started or sal a lot of playing time. Galcik and Mullen are expected to anchor the D-line and at linebacker Lucas Allison will be a threat to stop plays every down. “Defensively we return 3 defensive linemen that started or saw a lot of playing time. Along with two inside linebackers that played significant roles last season, we hope to be able to stop the run more effectively. In the secondary we have 3 returning starters. We hope the leadership that this brings will help solidify the secondary.”

Last year a a little crazy with the :emergency” co-op with West Middlesex but it looks like the Blue Devils are returning to a little normalcy. The team is now eligible for the playoffs and they have the roster to make a run. Paul Piccifilli will need to replace all three runners. It does help having Caullin Summers returning behind center. It also helps to have top receiver Garen Levis returning. Blaze Campbell comes over from Kennedy Catholic at the TE spot.