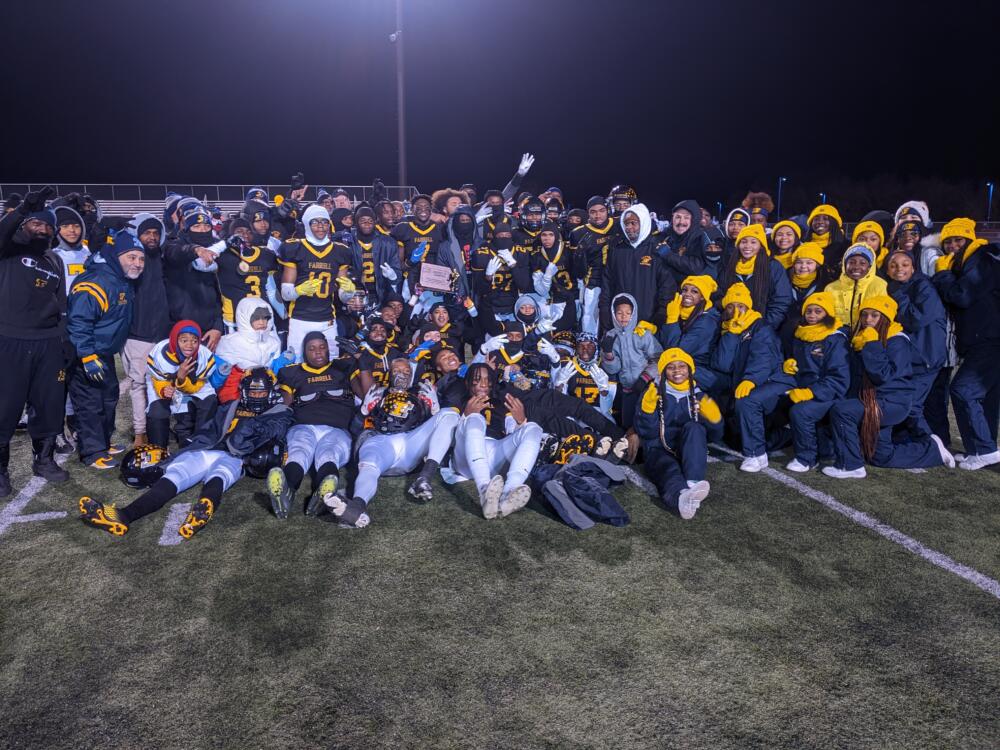 New Wilmington – D is for dominant.

Farrell used a dominant defense and 19-0  fourth quarter to capture their 7th District X title in eight years with a 26-0 win over Sharpsville Saturday night in New Wilmington.

“It’s a special feat to able to here eight straight years,” said Farrell head coach Anthony Pegues. “It’s great to be here and win again after our tough season in Region 3. I’m proud of my guys. They were able to buckle down in the second half and get it done.”

The second time around was much more competitive as the Steelers walloped the Blue Devils 48-7 on October 7th. On Saturday night, Farrell was held to seven points entering the fourth quarter before scoring three touchdowns in the final ten minutes and thirty seconds.

“The kids played their heart out tonight,” said Sharpsville head coach Paul Piccirilli. “We went back to our old wing-t, and we gained yards, but when you have penalties and turnovers, you can’t do that against a great team like Farrell. Our goal was to keep the ball on the ground and take time off the clock, and we did that. We just didn’t finish drives.”

In a spirited performance by Sharpsville, they never gave the Steelers a single offensive snap as they controlled the ball for the entire first quarter.

“Everything was going well through the first half despite us being down,” Piccirilli said. “We took several stupid penalties that hurt our chances, and you can’t give them any more yards than they deserve.”

However, it was Farrell who scored the game’s first touchdown when Brandon Chambers picked up a fumble and raced 66 yards for the icebreaker.

“They came ready to play, and we struggled in many areas tonight,” Pegues said. “But we were able to buckle down and play some hard-nosed defense, and that is what you need to do this time of year. If they don’t score, you don’t lose. We could play great defense and pound the ball in the second half.”

Another long possession by the Blue Devils ended on downs at the Farrell 22-yard line early in the second quarter.

An unfortunate series of events for Farrell on their ensuing drive led to Kylon Wilson being ejected from the game for throwing a punch following a 13-yard loss on third down.

“It looked like a kid said something to him, and he reacted,” said Pegues. “I didn’t think he deserved an ejection, but that is how this game sometimes goes. We’re going to try and figure this thing out on Monday. We have a lot of talented guys on this team, and they rallied around that, and now we need to keep working and move on.”

He will be suspended for at least one game against the Westinghouse next weekend. Wilson is second on the Steelers with 531 yards rushing and has a team-high 17 rushing touchdowns. He has also caught a team-high 46 passes for 975 and ten scores.

Farrell got their offense rolling in the fourth quarter as Chambers broke free down the near sideline for a 33-yard touchdown run. Chambers rushed for a game-high 122 yards on 20 carries, including 104 yards in the second half.

Following a Lamont Samuels’ interception, quarterback Kabron Smith scored from six yards out. Smith rushed for 27 yards on 11 carries while completing 4-of-7 passes for 24 yards with an interception.

“We told Brandon that when one guy goes down, everyone needs to pick their game up,” said Pegues. “He did a great job elevating his game, which is what this team is about.”

After holding Sharpsville on downs at their 17-yard line, Smith ran in his second touchdown of the night from a yard out.

Farrell improves to 10-1 on the season, and they will travel to Pittsburgh next Saturday for their game against unbeaten Westinghouse. The Steelers beat the Bulldogs 24-7 last season in the quarterfinals.

“Westinghouse is a very talented and well-coach team,” Pegues concluded. “We’ll have our hands full; we need a great week of practice. We played them last year, so we know what to expect. It will be down on their home field, and we wouldn’t want it any other way. If we want to get to where we want to be, which is the state championship, then we need to win these games.”

Sharpsville closes their season at 9-3.

“When we combined with  West Middlesex, I’ve never seen a group of kids come together and love each other as if they were in school together their entire life,” Piccirilli concluded. “I can’t say enough about this group. It was a special season.”