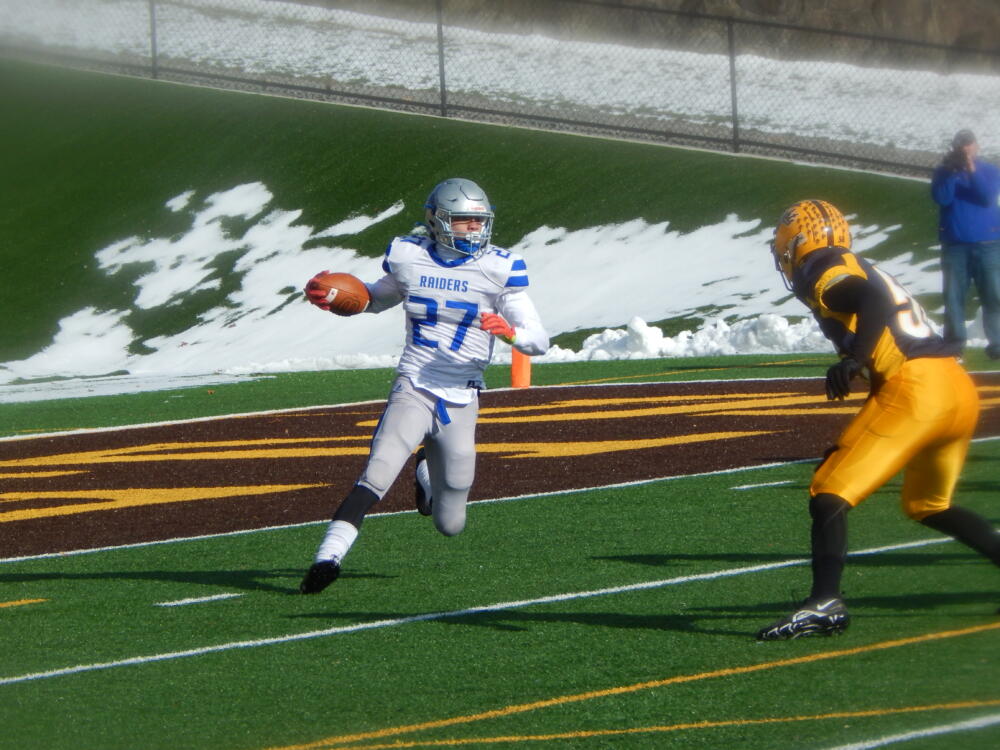 Jalen Wagner rushed for 270 yards and two touchdowns for Reynolds.

For the third straight season, the Reynolds Raiders are the District X Class A champions; for the second time in three seasons, they’ve defeated the Eisenhower Knights.

“For us to beat that team which is such a class act program, it means a ton,” said Reynolds head coach Josh Mull. “It’s a shame that someone has to lose in a championship game. I have nothing but respect for Eisenhower, and I believe that program will win a District X title in the near future.”

The Knights came into the contest at 11-0.

However, unlike in 2020, when the Raiders cruised to a 27-0 victory,  Reynolds needed a pair of fourth-quarter touchdowns to break a 14-14 halftime draw.

“We talked at halftime about how this game was going to come down to who wants it more,” Mull said. “We knew right from the beginning that they we ready to play. They smacked us in the mouth several times in the first half. But we stayed the course and made the plays we had to in the second half.”

On the first play of the fourth quarter, Jalen Wagner broke a 57-yard touchdown run capping a 6-play 74-yard drive giving Reynolds their first lead of the game at 22-14.

After their defense forced Eisenhower to go three plays and out, a punt pinned the Raiders at their 3-yard line. Reynolds then went on the drive of the night, moving 97 yards in 14 plays.

“That entire drive was about putting the nail in the coffin,” said Mull. “We knew what we needed to do, to make sure that we executed, and that is what these guys did.”

Faced with a fourth down and six from the Knights’ 31-yard line, the Raiders called for a flea-flicker, and Brayden McCloskey tossed the game-clinching touchdown to Haydin Mclaughlin.

Reynolds’ defense which pitched a second-half shutout, limited Eisenhower to only 35 yards of offense in the second half.

“It was our defensive mentality that we talked about in the locker room,” said Mull. “We had made a small adjustment on the edge because they were hurting us there, but it was more about our attitude.”

All the first-half scoring came in the second quarter, with Eisenhower cracking the scoreboard first when Tucker Lindell scored on a 13-yard run.

The Raiders responded with McCloskey scoring on a 2-yard run.

On the next play from scrimmage, Benji Bauer extended the Knights’ lead when he raced 65 yards for a touchdown. Bauer led Eisenhower with 87 yards on 13 carries.

Reynolds tied the game when Wagner scored on a 39-yard run one play following a punt after the Raiders pinned the Knights inside their 10-yard line.

Jalen Wagner rushed for a game-high 270 yards on 36 carries with a pair of touchdowns.

“We knew coming into the game that the yards and offense weren’t going to come as easy,” Mull said. “It’s a credit to our offensive line as well, Jalen, for sticking to the gameplan; we made many mistakes in the first half. The difference was how we ran the stretch run plays in the second half. Our guys did a great job with that adjustment.”

Reynolds had a chance to open the scoring on their initial drive moving 54 yards, but McCloskey fumbled at the 1-yard line into the end zone that Eisenhower recovered for a touchback.

The Raiders will move on to play District 9 Champion Port Allegany next weekend.

Eisenhower closes their season at 11-1.

“I’m proud of this football team; Reynolds has been the top team Class A for a while now,” said Eisenhower head coach Jim Penley. “We knew they had some tremendous athletes, and we hit them and struck them, especially in that first half, but they were able to make a few more plays than we were today.”