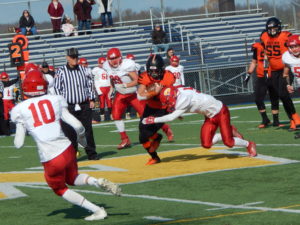 Sharon routed Girard 48-14 Saturday afternoon at Wilmington High School in the opening round of the District 10 3A playoffs.

Lane Voytik led the way for Tigers as he completed 16-of-25 passes for 324 yards and two touchdowns.

“We’ve come to expect that from him, what he’s doing isn’t easy,” Sharon head coach Jason McElhaney. “He’s been doing what he always does, and our receivers were going and getting that ball today.”

Coming off a bye week, the Tigers showed no signs of rust dominating in all aspects of the game.

“We practiced well all of last week,” said McElhaney. “I was not worried about any rust coming out here today. We had a great week and got well-prepared.”

Sharon scored on their first four possessions of the game and took a 35-7 lead into the locker room.

The running back duo of Brady Ortiz and Tyvell Richardson split 3-yard rushing touchdowns on the Tigers’ first two drives.

The duo combined to rush for 128 yards and four touchdowns. Ortiz gained a team-high 67 yards on eight carries, while Richardson had 61 yards on nine attempts. Both players scored two touchdowns each.

“When you combine what these two guys have done, it’s around 1400 yards at this point,” said McElhaney. “Replacing Jordan Wilson is impossible, but both of them together are filling the hole just fine.”

Girard was able to get a first-quarter touchdown when quarterback Austin Barrett threw a screen pass to Todd Essman, who broke free for 64 yards.

The Tigers answered back with Richardson’s 22-yard run to close the quarter.

Lane Voytik tossed a 14-yard score to Ty Eilam, while also rushing for a 1-yard touchdown in the second quarter.

Sharon put in the mercy rule on the first play of the second half when Voytik and Eilam connected on a 54-yard pass.

Eilam had a monster game with six catches for 142 yards and two touchdowns. Ja’On Phillips added 90 yards on four receptions.

“It depends on the coverages we see as to who might have a big game at receiver,” said McElhaney. “Lane won’t force the ball. On any given day, one of our guys can go off at receiver. They’re all very talented.”

Capping the scoring for the Tigers, Ortiz scored from four yards out late in the third.

The Yellowjackets capped the scoring when Barrett scrambled for a 22-yard touchdown.

Austin Barrett led Girard with 205 yards of total offense and two total touchdowns. He completed 8-of-16 passes for 151 yards, while also rushing for 54 yards.

“Austin reminds me of a video game with some of the plays he makes,” said Girard head coach Billy McNally. “He can make plays with his legs and arm. People always fall for his pump fake. Then he takes off.”

Girard closes their season at 4-6.

“Three years ago, this team won one game,” said McNally. “We’ve been doing little building blocks. Coming out here against a team like Sharon shows what these guys still need to do. It was big for our kids to see a team like Sharon. That’s the program we want to build.”

Sharon improves to 7-3 on the year and will take on either Harbor Creek or Slippery Rock in the semifinals.

“We’ll wait it out and see who we’re going to play in the next round,” said McElhaney. “We know what Slippery Rock will bring. We haven’t seen much on Harbor Creek.”