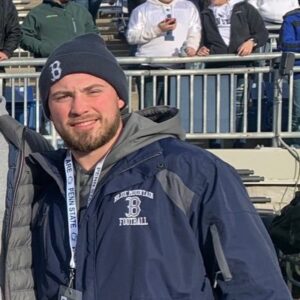 Tom Gallagher(25yrs old), a 2018 graduate at Lebanon Valley College, 2014 graduate of North Schuylkill, was named Blue Mountain’s new head football coach earlier last week. Gallagher, the former linebacker at North Schuylkill, and LVC, takes over the head coaching position for Cory Mabry, who stepped down from the position after 8 seasons. Mabry said in a statement, ” the reason for stepping down was that he wanted to spend more time with his family. ” During those 8 seasons as head coach of the Eagles, Mabry guided his teams to 2 Eastern Conference Championships, the first came in 2014 when the Eagles captured the crown defeating Fleetwood 41 to 38 in overtime, and the second was in 2016 when the Eagles defeated Northwestern Lehigh 51 to 30. Mabry compiled a career record of 46-39. Gallagher takes over a struggling Eagles team over the last four seasons, with 4 straight losing season, having a record of just 14-27.

Tom isn’t new to the program however as he has been an assistant coach with the Eagles over the last three seasons on the defensive side of the ball, during his time at Blue Mountain as an assistant coach, the Eagles defense has given up 668 points, 21.5/per game. Gallagher thrived as a hard hitting lineback for the Spartans as well as at LVC, and hopes to bring that same aggressiveness to his new role.

Tom joined the Eagles in 2018 after he graduated at LVC, in 2020, he served as the Eagles co-defensive coordinator, working with the linebackers on defense, as well as with the tight-ends and halfbacks on offense.  Gallagher stated he is very excited, and really looking forward to getting to work and make the Eagles program the best it can be. He also stated that this was something he always wanted to do once he got to college. Before taking the head coaching position, he contacted Frank Gaffney, and his former head coach at North Schuylkill Wally Hall, to which they told him to just be himself, and do what he can do, and do it for the right reasons.  In an interview with WPPA radio, when asked if he plans to keep the same old traditions on offense, Gallagher said, ” I’m hoping to change it up a little, using a different offense than used to being seen with the double wing-t but, also plans to keep some of the old traditions while making new ones in the process.  His basic plan is to install what he learned at North Schuylkill and Lebanon Valley College and add them to the already good things at Blue Mountain. 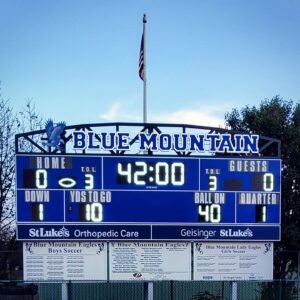