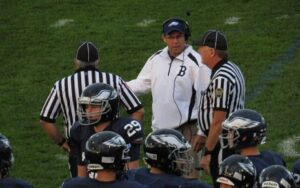 Blue Mountain Eagles Head Coach Cory Mabry is stepping down from his position. Coach Mabry coached the Eagles for 8 season compiling a record of 46-39 during his time as their Head Coach. Coach Mabry stated he ” wants to spend more time with his family and new grandson ” when asked why he is stepping down. Coach also stated that ” he has no plans to take any other coaching jobs as of right now. ”

Coach Mabry guided his teams, players to the playoffs in 6 of the 8 seasons at Blue Mountain, adding two Eastern Conference Championships, in 2014, when the Eagles defeated Wilkes-Barre Coughlin in the EC Semi-Final 35 to 21, then defeated Fleetwood 41 to 38(OVERTIME), to win the EC Championship, in that game snow started to fall which made for a perfect game. Blue Mountain finished the season 10-2. 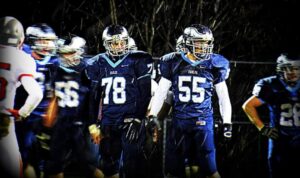 In 2016, the Eagles defeated Northwestern Lehigh 51 to 30 to capture the EC Championship and finish the season with a 9-2 record.

The Eagles other playoff action under the coaching of Cory Mabry unfortunately were losses, in 2015, the Eagles qualified for the District XI playoffs but were ousted by Lehighton 28 to 7, to finish the season 9-2. The next 3 playoff appearances under Coach Mabry were also District XI playoffs in 2018, 2019, and 2020, all against Bethlehem Catholic which saw the Eagles season end each time with scores of 45 to 13, 24 to 6, and 17 to 0.