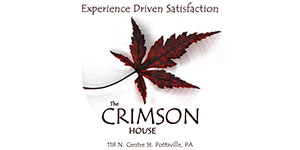 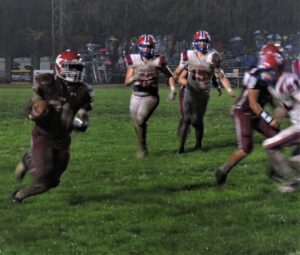 Crucial call ends game at Pottsville’s Veterans Memorial Stadium as the Crimson Tide defense stepped up when they had to in victory over #1 Class 3A State Ranked North Schuylkill 20 to 12 in DOUBLE-OVERTIME !!!

Before the game started, there was just light drizzle in the air, that was until the teams came out on to the field to start the game, the weather went from bad to worse. Heavy rains began to fall from the sky and drench the field making it difficult for either team to move the ball on their opening drives. The Crimson Tide would fumble on their opening drive and with 3:14 to go in the first quarter, North Schuylkill’s Jake Hall connected with main target all season, Joey Flail, for 24 yards, giving the Spartans the lead 6 to 0 after the two point conversion attempt failed. Pottsville would eventually put together a decent first half drive, going 42 yards and a score by RB-Travontai Davis from 20 yards out would tie the game at 6 after the kick failed with about seven minutes to go in the first half. Neither team would be able to score for the rest of the quarter, and the score at the half would be 6 to 6.

Pottsville would receive the second half kickoff. Much like the first half, the field was still sloppy, the rain was still falling, heavy at times, and the numbers were starting to be hard to see. North Schuylkill would slowly gain field position as both teams would punt. Late in the first quarter, as the Spartans were driving, Pottsville came up big with a stop on 4th and 1 for North Schuylkill at the Tide 17 yard line with just under 2 minutes to go in the third. It was still a tie game going into the final quarter as the rain kept coming. Weather played a major part in this game as neither team could gather momentum on offense, nor could they do much of anything in their passing game. Josh Chowansky couldn’t seem to get his footing for the Spartans, and Jake Hall couldn’t use his arm. Same could be said for Pottsville’s Jazce Carabello-Snowell, Amari Dunn, and Travontai Davis. At the end of regulation, the score would be still tied at 6 each, and we would head to overtime.

North Schuylkill would get first chance on offense, and would put the ball into the endzone when Jaxson Chowansky would take it 4 yards, with the field soggy and muddy, they Spartans would decide to go for two, and would fail. It was now Pottsville’s turn on offense, and the Crimson Tide would respond when Snowell would hit his big tight-end Max George in the endzone to tie the game at 12, point after try was blocked. Onto the second overtime… This time Pottsville would get the ball first, and like the first overtime, would score. The Crimson Tide would go for two this time, and convert putting them up 20 to 12 with the Spartans turn coming up. North Schuylkill would have the ball 4th down at about the 3 yard line when on the next play, the Spartans would call for a run play up the middle, I personally couldn’t see if it was a fumble, or a pitch, but QB-Jake Hall would come out with the ball, and dart right… turning towards the endzone at the 1 and leaping into the air, hitting the pylon with the ball. The whistle blew and the game was over, Pottsville coming out with the victory 20 to 12 on this cold, damp, wet, rainy night in Pottsville,Pa !

After the game, the next day actually, I was able to contact both quarterbacks, and they had this to say… ” Last night not much went well for us, whether it was the limitation of our offense due to the weather. field position throughout the entire game and not breaking out any big plays, as a team, we just have to live with that now, and get back in the right mindset for playoffs ” said Jake Hall. Pottsville’s quarterback said … ” In my opinion, it just came down to who really wanted it more, our defense played amazing and was able to make big time stops when needed and our offense kept fighting even when things didn’t go our way, at the end in OT we put everything on the line and were able to make big plays on offense and major stops on defense. We worked as a team all night and were able to come out with the win. I had the ball in my hands at the end of the game and I knew I had to do everything I could to win the game for us. ”

PHOTOS DURING THE RAIN SOAKED GAME: