Easton RB makes his choice of college, will head to the deep south after high school to play for Louisiana Monroe @nahjeeadams_ @EastonFootball @ULM_FB 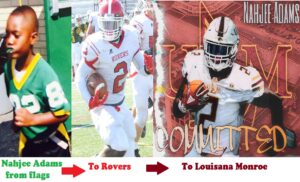 It isn’t often that we see a southern team take PA talent away from the Keystone State. Last year, Georgia Southern picked up a couple in Sean Pelkisson and Marques Trent. But with a familiarity of the PA football landscape, anything is possible. Louisiana Monroe Defensive Asst/Linebacker coach Patrick Miller hails from the east side of PA and coached with Alvernia until heading south.  “He was my Recruiting Coordinator/Analyst. He gave me really good insight of the program & University itself. I felt it would be a good opportunity & be the best fit” said Adams of his choice.

UMass, Buffalo, Bowling Green, Furman, Stony Brook and more sought the talented Adams, who had at least 15 D1 offers. The speedy incoming senior has rushed for 2,100 yards and found the endzone a total of 29 times on the ground for the Rovers. The 5-11, 200 pound back also has 2 interception returns and 3 receptions for scores. Tonight, he made his commitment to the Warhawks know via twitter:

We caught up with the star Rover to ask him about this choice:

PFN: Why did you choose to commit to the Warhawks?

Nahjee: I wanted something different. I wanted to spread my wings & explore, I felt it was the right decision for not only myself, but my family as well. I wanted to experience a new setting, give my parents & family a new environment. This is a childhood dream I’ve had since I was 6 years old, to be able to live in the dream is a blessing.

Nahjee: I felt in my Gut that it was the right decision to make. It was a confident decision my family & I have made.

PFN: Who was your biggest influence at ULM, who recruited you?

Nahjee: In a player like me, I think the University of Lousiana Monroe will be getting a hybrid athlete. I think i am as versatile as they come. I can block, run, & catch out the backfield. Most importantly, they’ll be getting a solid young man, a confident leader & teammate who will do whatever it may take to make sure his team succeeds. He’s the perfect character a team & program would want.

Nahjee: The recruiting process was a once in a lifetime experience. It was very fun. It was enlightening, being able to see all your hard work pay off in a deserving way. It was amazing being able to build relationships & connect with so many different Coaches & programs.

Nahjee:  Covid 19 pandemic had affected my decision toward the end of the process because my time frame was continuously being fluctuated. It was difficult not being able to go see the schools in person, actually visit & tour the campuses. Virtuality become the new normal, so I did most of my visits, tours, & saw all the nice facilities & equipment Virtually.

Nahjee: I was Recruited for Running Back.

Nahjee: Both my Parents, my mother & father played a tremendous role in my recruiting process. Although they stood beside me, guiding me, & assisting me, they both gave me the benefit of the doubt to choose wherever I wanted to go. I was able to choose where I felt more comfortable, where I felt I would be most happiest, & I couldn’t thank them enough for allowing ME to choose my own destination & route for the next 3-4 years.

PFN: What do you think is the most exciting thing about the ULM program?

Nahjee: The most Exciting part would be the process. The rise of the talent we have coming. I’m excited about the future & what we have planned to come.

PFN: What are you most looking forward to while playing for the Warhawks?

Nahjee: I’m most looking forward to playing great ball. Playing against the best of the best. I’m excited about being in a new setting, a new environment. It’s going to be different, but I’m ready for the change.

Nahjee:  This is for my family.