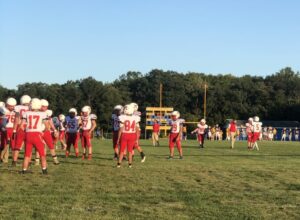 The Jim Thorpe Olympians took on the Marian Colts in their season opener In Hometown on Friday night. Thorpe set the tone early on their way to a 43-0 win. After a 3 and out, Sal Capria got through untouched to block the Marian punt into the endzone for a safety. On the ensuing drive, the Olympians were forced to punt. Special teams came up big again and forced a fumble on the return.

Running back Brandon Fasolino capitalized on the turnover punching the ball in the endzone from 8 yards out. After another stop, Fasolino broke free again for a 40 yard touchdown run. Later in the 1st, Senior Quarterback Davier Calcano connected with Derryl Fisher for a 47 yard score to extend the lead to 23-0 after one. A very young Colts team picked up their play on defense in the 2nd quarter, holding the Olympians to just 6 points, and forcing two turnovers.

To start the 2nd half, Thorpe running back Gavin Fikentscher got the Olympians back into the endzone running one in from 3 yards out. Later in the quarter to close out the scoring for the night, Jason Bowen scored from the 4 yards out. The Olympians spread the ball around on the ground all night with 11 people getting touches totaling 222 yards. The stars of the night tho were the defense and special teams. Thorpe held the Colts to just 20 yards of total offense, and forcing 7 fumbles (recovering 4).

Special teams also played a huge part, forcing 8 punts and blocking 3 of them. Jim Thorpe will look to build on a great week 1 performance as they travel to Blue Mountain to take on a tough Eagles team next week.