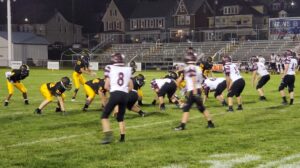 LANSFORD- Both Panther Valley and Lehighton came into Friday night’s contest with questions at quarterback. The Indians Richard Fronheiser, getting his second varsity start, the senior threw for 345 yards and five scores in the first half to lead his squad to a 40-12 win over the Panthers.
Fronheiser got to work early, after the defense stopped Panther Valley on downs deep inside Indians territory, Ian Rarick was on the receiving end of a 82 yard touc

Lehighton extended to a 14-0 lead as Fronheiser connected with Zack Hunsicker for a 33 yard score on third down with just over three minutes left in the opening quarter.

Lehighton, having the advantage of the size and speed against the Panthers secondary took full advantage as they pushed the lead to 34-6 at intermission. Fronheiser hooked up with Hunter Crum twice from 20 and 23 yards out and a 24 yard score to Ethan Buchert with just 25 seconds left in the half.

The Panthers signal-caller Michael Pascoe, a sophmore, making his first start played very well. A couple of dropped passes early stymied promising drives. The home team got on the scoreboard on a two yard Pascoe run, after he picked up 20 yards following a 60 yard kickoff return by Louis Clauser to make the score 34-6 at half.

“We played to our strengths, we got the ball to our skill players, Hunsicker and Crum early on some quick outs and they did the rest.” Lehighton coach Tom McCarroll stated.

Hunsicker had nine receptions for 98 yards, while Crum had six catches for 93 yards.

McCarroll gave Fronheiser the second half off, to give some of his younger players some gametime experience. running back JJ McDowell carried the load as he found the end zone on a five yard score with 8:19 left in the third quarter.

Besides Pascoe, the other bright spot for Panther Valley was Clauser’s play as he scampered for an 80 yard run around the edge, after the defense forced a missed Indian field goal. Clauser finished with 124 yards for the game.

“Overall we played well. We have to refine some things, but we are light years ahead of where we were last year.” Panther’s coach Rick Jones said after the game.

Next week Lehighton travels to face Tamaqua, a 49-7 winner over Shenandoah Valley Friday, while Panther Valley will be at home with Marian Catholic, who lost to Jim Thorpe 43-0.