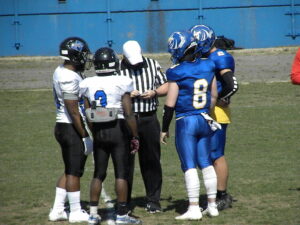 Coming into yesterday’s game vs George Washington, Belmont Charter had yet to play a game, and was only able to “get in about a half hour of special teams practice” as stated by the head coach and it showed on the opening kickoff when George Washington pulled an onside kick and recovered the ball.  That set the tone for most of the first quarter of play when after George Washington put the first points on the board with a 21 yard touchdown run by senior running back #25-Darryl Johnson, the Eagles again kicked the onside kick and recovered, but this time, no points came out of the drive.

On the drive after the second onside kick by the Eagles, GW moved down the field to the Belmont Charter 30 but failed to convert on 4th down, and BC took over on downs.  At the end of the first quarter, BC converted on a 4th and 13 at their 42. Time continued to wind down and once again, BC was in GW territory with a 4th and 7 to go when they call timeout.  The Eagles defense held and took over at their own 41, on the next play, the Eagles quarterback #8-Sophmore Kyle Schumann hooked up with #7-Sophmore Jonathan Cebollero for 59 yards and the score, the 2 point conversion followed and the Eagles extended their lead to 16 to 0 just before halftime, unfortunately, I didn’t get any video of the play ! BC Head Coach stated after the game that, “those two onside kicks to start the game really shifted the momentum early, and that, that is on him, as stated before, he only got in about 30 minutes of practice with his special teams for the entire week leading up to the game.”

In the second half of the game, it was a tough, grind it out battle for the rest of the game as both teams had moved the ball only to have their drives stall either by miscues, overthrown passes, or penalties.  George Washington received the second half kickoff but couldn’t muster anything and had to give the ball over to BC.  Belmont had one play, I thought was actually a touchdown but apparently the receiver fell just short of the goal line as the pass went for around 64 yards down to the Eagles 1 or 2 yard line, 1st. and Goal.  For a moment, the momentum seemed to have shifted but stumbled on three consecutive plays for a loss, and eventually would give the ball back to the Eagles on downs at the GW 4 yard line. For the rest of the game, it was back and fourth until late in the 4th, Eagles defense comes up with the interception to seal the deal and run out the clock ending the game with a final score 16 to 0 !

After the game, I talked with George Washington Head Coach about how he felt how today’s game went, played out.  Coach stated that, “it felt good, they got great play from their defense for the second week in a row”, posting back to back shutouts, and that with only he believes 2 seniors on the team, so they been having to “plug in spots on the line, as some kids couldn’t return since COVID, and sorta have checked out”, and when asked about the second half, not being able to get much going, coach said, that he “started throwing the ball a little more up 16 to 0, he figured they could work on some things in the passing game, looking further down into the season”, hoping to get more things going.

Oh yeah, let’s not forget about that one punt that went for about 70+ yards.

« Penn Wood Steps on the Gas Pedal with Powerful Offense to Defeat Chichester
Truman Tigers Improve to 2-1 on the Season with victory over Norristown 22 to 12 ! @NtownFootball @HarrySTrumanHi1 @570Football @Sinnysowavy1234 »