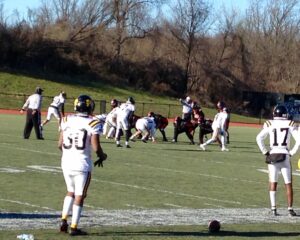 It was only a few months ago when Abraham Lincoln (1-0) and Overbrook (0-1) High Schools were forced to sit out and watch as other football teams around the region played their fall seasons.

On a sunny yet chilly March afternoon that felt a lot more like winter than spring, both teams took to the gridiron to begin an alternative high school football season.

Due to the winter weather and truncated practice sessions leading up to the spring season, both teams didn’t get to participate in the traditional preseason practices.

And the lack of prep time showed itself early in the game, with both teams exchanging procedural penalties, turnovers on downs, and fumbles in the first quarter.

The Lincoln Railsplitters first break came with an impressive interception and return to the 1-yard line by senior defensive back Rashem Woody. Not only did he read the Overbrook overthrow perfectly, but Woody showed off his shifty nature breaking multiple tackles on the return after the interception.

“I saw the ball was overthrown, and I was able to read it for the pick. I thought I scored, but they called it back to the one,” Woody laughed.

On the next play, sophomore quarterback Khani Knight punched it in with an acrobatic QB keeper, setting the Railsplitters up with an early 6-0 lead after a failed two-point conversion attempt.

The Overbrook Panthers kept the game close throughout the first half, led by senior defensive end Clark Edmonds and the stout team defense, which forced multiple turnovers. But every time the Overbrook offense began to gain momentum on a drive, an untimely penalty or turnover shifted it back to Lincoln.

But as the Railsplitters drove late in the 2nd quarter, the Panthers defense again came up with a huge interception in the end zone, limiting the damage and sending the Panthers into the locker room trailing only 6-0.

In the 3rd quarter, both offenses remained stagnant as Lincoln relied on its defense once again to put points on the scoreboard punctuated with a punt return after a Panther’s player mistakenly touched the ball while it was on the ground. Alert to the Overbrook misstep, Jayson Dawkins scooped the football up for a 60-yard touchdown return.

After another failed two-point conversion attempt, the Railsplitters took a 12-0 lead heading into the 4th quarter.

But the game was far from over. After a Lincoln fumble, Overbrook quickly moved the ball downfield to a first and goal on the 3-yard line.

Unfortunately, procedural penalties continued to handcuff the Panthers. Back-to-back false starts moved Overbrook back to a tough to convert 3rd and 13.

Back-to-back pass breakups by the Railsplitter defensive forced another Overbrook turnover on downs.

“If our defense keeps playing like this,” coach Cooper said, “I think things will be great. It’s great to come out and get a shutout in the first game.”

To finish the game, Lincoln running backs Jaheim Counts and Keyei Simmone-Green, the Railsplitters were able to kill the clock with a lengthy drive before punching it in for the final touchdown of the game on a quick slant from Knight to Saahir Strong-Teagle, sealing the 18-0 Railsplitter victory.

“The O-line was great,” coach Cooper stated after the game. “It has the leaders and a lot of our returning players. They are the mind of our offense. They keep everything together for us.”