Coming into the game today, Northeast had much fewer players than Saint Joe’s, those missing players could have made much of an impact and difference in the day. But the mentality is always next man up, from the get-go, it was all coming up for SJP. Early three-and-outs, quick scores, forced turnovers, dominating run game, and much more set up the entire game for SJP and they did not slow down from there.

“Just getting back to doing the things that we need to take a step forward. Clean up the penalties, making sure we get back to the fundamentals, and it’s about us it can’t be about the opponent it’s got to be more about us and make sure we’re finding a way to get better each and every day we get out there on the field”- says Coach Roken on asked about they got ready for the week against Northeast.

By the time the first quarter was over Prep was already up 21-0. Prep took the early 7-0 lead from a 1-yard handoff by runningback Kahseim Phillips when he got the chance to walk in for the endzone to set up the lead only a minute and twenty-four seconds into the game. The craziest part about the early score was that Prep didn’t start with the ball. The defense showed up early forcing a fast three and out and with heavy winds, the punt didn’t go too far. The quarter ended with a fifty-six-yard catch and run from WR Elijah Jones off a nice find from QB Samaj Jones. WR Jones made an excellent double move in the open field to create separation and take the play to the endzone which gave Prep a comforting early 21-0 lead in the 1st.

“It was really simple, they came out in a cover one high shell and I knew that seam shot is going to be there we practiced for it all week you know gameplan for them and it was just how we drew it up”-Samaj Jones going into detail when explaining what he saw when getting the ball to Jones.

The second quarter created more separation and showed that Northeast’s defense could not hang with Prep’s offense. With a blocked punt, Phillips scoring his second, and Owen Garwood taking a checkdown all the way into the endzone Prep was dominating offense, defense, and now special teams. By the 2:15 mark of the first half, the game was over. Northeast had a stroke of life when Kahmir Prescott took the screen pass for seventy-seven yards to set up NE in the red zone at the five. After two false starts and an incompletion NE looked like they wouldn’t get another chance, but the PI call gave them it. Seconds later Rashaan Swygert put NE on the board with a seven-yard slant with 1:06 remaining n the half to cut the score to 35-6. The highlight of the quarter was when Phillips hurdled a defender at the four and got into the endzone for the first score of the second quarter with 7:30 on the clock that gave SJP the 28-0 lead.

“Got to get in the endzone by any means necessary. My o-line did a great job opening the whole and getting me one on one with the safety and I did what I’m supposed to do, Get in the endzone” – Phillips when asked about his hurdle.

#4 Phillips scores his 2nd touchdown in fashion Leaping over the defender for the 7-yard touchdown run. @SJPrep_Football takes a 28-0 lead with 7:30 remaining in half. @afrankl3 @PaFootballNews pic.twitter.com/KBuphvFstY

The second half came and went, by now mercy rule was in play, and without any stops in the clock, Prep could only get two more touchdowns. Sanchez and Will Vokolos scored the last two scores of the day for either team but already up 49-6, the defense had no means to not stop trying. Special teams broke through the line getting a second block which helped set up Vokolos for his score and to seal the deal on the day, Ryan McDonald picked off the ball setting up Prep at their forty-six.

#19 Ryan McDonald picks off the ball and @SJPrep_Football takes over at the 46. @PaFootballNews @afrankl3 pic.twitter.com/wsdxVJEetu

With the win today Prep clinched a ticket to the State playoffs and they will go through the same process that they have been going through since day one of the regular season and day one of the playoffs.

“Pressure is a mindset you know we prepare for every game just the same facing opponents doesn’t matter who we playing, where we playing, when we playing we’d go out there playing the Philadelphia Eagles if we had to”- Samaj Jones when asked about the upcoming pressure with State’s right around the corner. 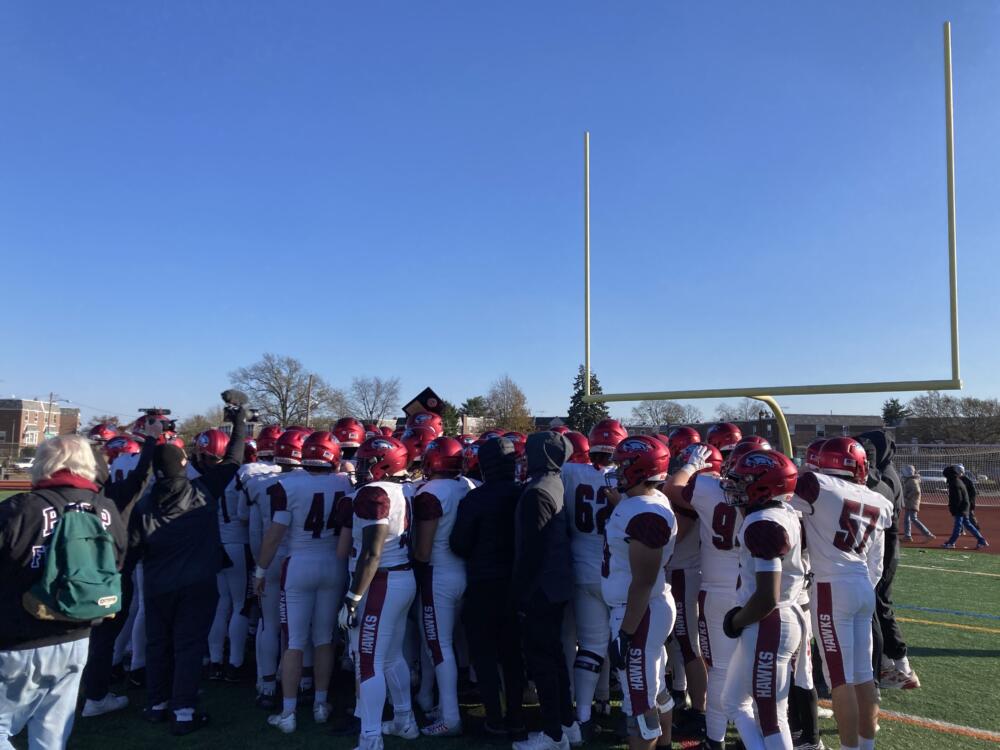 “As a staff fortunately we’ve been in this position before so it’s getting another group prepared mentally and physically to be able to keep this train rolling but it’s moving on and trying to keep a group together and stay together as long as we can, it’s the same thing get back to the fundamentals, clean up the penalties, make sure we find way’s to get better next week and go out and give our best effort” – Coach Roken says when how he is going to get the team ready for playoffs.

For Northeast, they may have lost but the score doesn’t show how they really played. Receivers getting open on multiple occasions but not being able to connect passes took a toll on the score. Numerous passes that went over the heads or dropped by the wide-outs showed the Northeast had chances but could not get there. NE hampered the Prep defense with Receivers beating the Defensive backs but were unable to get there all the way.

As for Saint Joseph Prep, they advance showing why they are one of the best team’s in the state and bouncing back after a struggling win against La Salle, this win will boost the confidence and mentality of every player, coach, and fan.