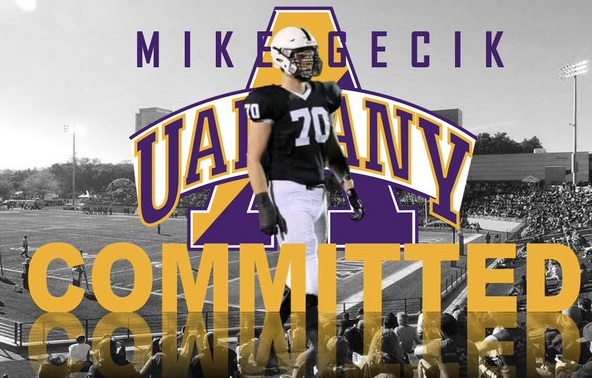 Delaware Valley puts out some talent every year. This year is no exception. Earlier this summer linebacker Jason Henderson committed to Old Dominion. Mike Gecik is the second Warrior to commit to a division 1 school.  The 6-8, 270 pound offensive lineman chose the Great Danes of Albany. He chose that program over the likes of Stony Brook, Monmouth, Marist, , Bryant, Lafayette, RMU, Lehigh, Bucknell and Colgate. Mike made his announcement on twitter Wednesday evening.

We’ve been along the ride with Mike and his parents Kim and Mike for several years now and it was our pleasure to catch up with him and ask him about his decision and the process he took in selecting Albany:

PFN: Why did you choose to commit to the Great Danes? *

Mike: I have a good relationship with the coaches there, the campus is amazing, everything felt right about it

PFN: Why commit early/commit to them? *

Mike: Make sure I was able to choose the school I thought was right for me before it was too late

PFN: Who was your biggest influence at Albany, who recruited you? *

Mike: Coach Sweeney, he’s a great guy and has alot of experience from his past as he played offensive line at the professional level.

PFN: What are they getting in player like you? *

PFN: What was the recruiting process like for you? *

Mike: The recruiting process I wouldn’t say was difficult but there were times when I had to make tough decisions, it was overall good for me

PFN: How did the Covid 19 pandemic affect your decision? *

Mike: I was unable to meet with coaches in person and not able to see certain schools due to the restrictions, which made it a little more difficult than I assume it would be if it were under normal circumstances.

PFN: What position were you recruited for? *

PFN: Do you know what you’d like to study? *

PFN: What role did your parents play in your decision? *

PFN: What do you think is the most exciting thing about the Albany program? *

Mike: The atmosphere that I’ll be playing in, team spirit

PFN: What are you most looking forward to while playing for the Great Danes? *

Mike: Being able to build a bond with the rest of guys who will be there with me

PFN: Tell everyone out there in the football world something they’d never know about you until you told them: *

PFN: Who is the person who most influenced you in your football career? *

Mike: Other than my parents I would say my coach (coach O), he’s a very wise coach who has helped me with alot through my career during high school and through the whole recruiting process.

PFN: What is it you’d like all your high school teammates and fans to know about your decision that you might have a hard time saying in person? *

Mike: I’ll always have the memories of the place that built me into the athlete I am today in my mind.