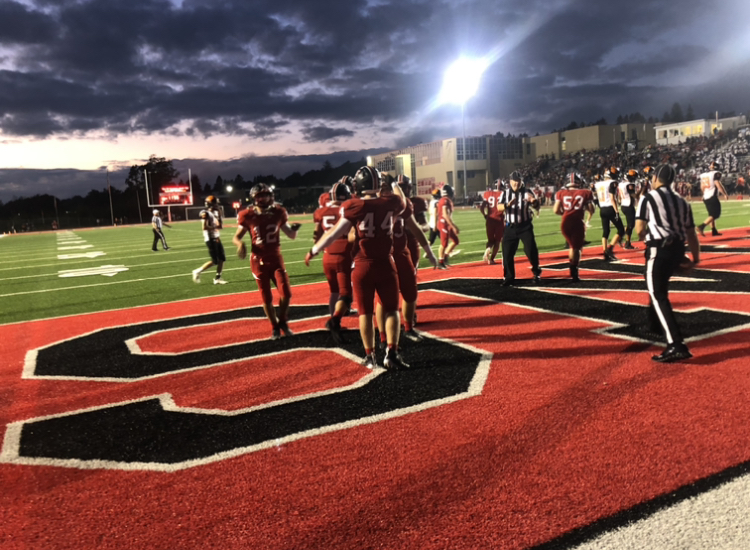 Friday night,  North Pocono fans were treated in  Moscow to another defensive masterpiece by North Pocono, The Trojans forced 4 turnovers in a  47-7  rout over Tunkhannock. The Trojans declawed and pick apart the Tigers all night long.

Right out of the gate, the Trojans were ready to go. They took the opening kickoff back to the 45-yard line, and just 3 plays in, Quarterback William Soma would connect with Dan Smith for a 44 yard touchdown pass. The extra point was good, and with 10:24 left on the clock, the Trojans led 7-0.  That score set the tone for the rest of the evening.

Tunkhannock would have a solid opening drive, but it ended in a punt that pinned North Pocono at its own 2-yard line. The poor field position did not discourage the Trojans. They put together a 99-yard drive that lasted 5 minutes and took up the rest of the first quarter.  The quarter came to a close with the Trojans up 7-0.

North Pocono would cap off that long 99-yard drive on fourth down when William Soma connected on a pass to the tight end Ty Lafave. The results were a 3-yard touchdown pass. The extra point was no good, and with 11.56 left in the quarter the Trojans led 13-0

There seemed to be a little ray of hope when Garret Yuhas returned the ensuing kickoff 85 yards for a Tigers score,  It appeared that Tigers still had some roar left in them, but any signs of a Tigers comeback were erased when Riley Moore ran back the ensuing kickoff to that 35-yard line that set up the Trojans for a score. Two plays later Kory Eisley ran it in from 2 yards out, furthering the humiliation, and making the score  20-7 North Pocono with 10: 37 left in the half

The Trojans would pour it on the Tigers with 2 more scores in the quarter. Soma connected on a 24-yard touchdown pass to Ashton Smith that made the score 24-7 North Pocono. Six  minutes later  Soma would do it again, this time using his legs for a 1 yard QB sneak with 1.21 left in the half. The first half ended with the Trojans on top of the Tigers 34-7.

The Second half would be very similar to the first half. A big play early in the quarter came when Michael Blaine intercepted Ben Chilsons pass and returned it 25 yards for the score on the opening play of the second half. The extra point was good and with 11:54 left in the quarter the Trojans led 41-

The Trojans landed one more blow to the Tigers when Kevin Wickizer ran 30 yards for the Trojans  final score,  making it 47-7 with 7 minutes left in the quarter . From that point on , the second teams were brought out from  both teams to finish the game. . North Pocono (3-1) will host Wallenpaupack (2-2) and Tunkhannock (2-2) will be at Valley West (2-2)