State College Advances to 6A Quarterfinals 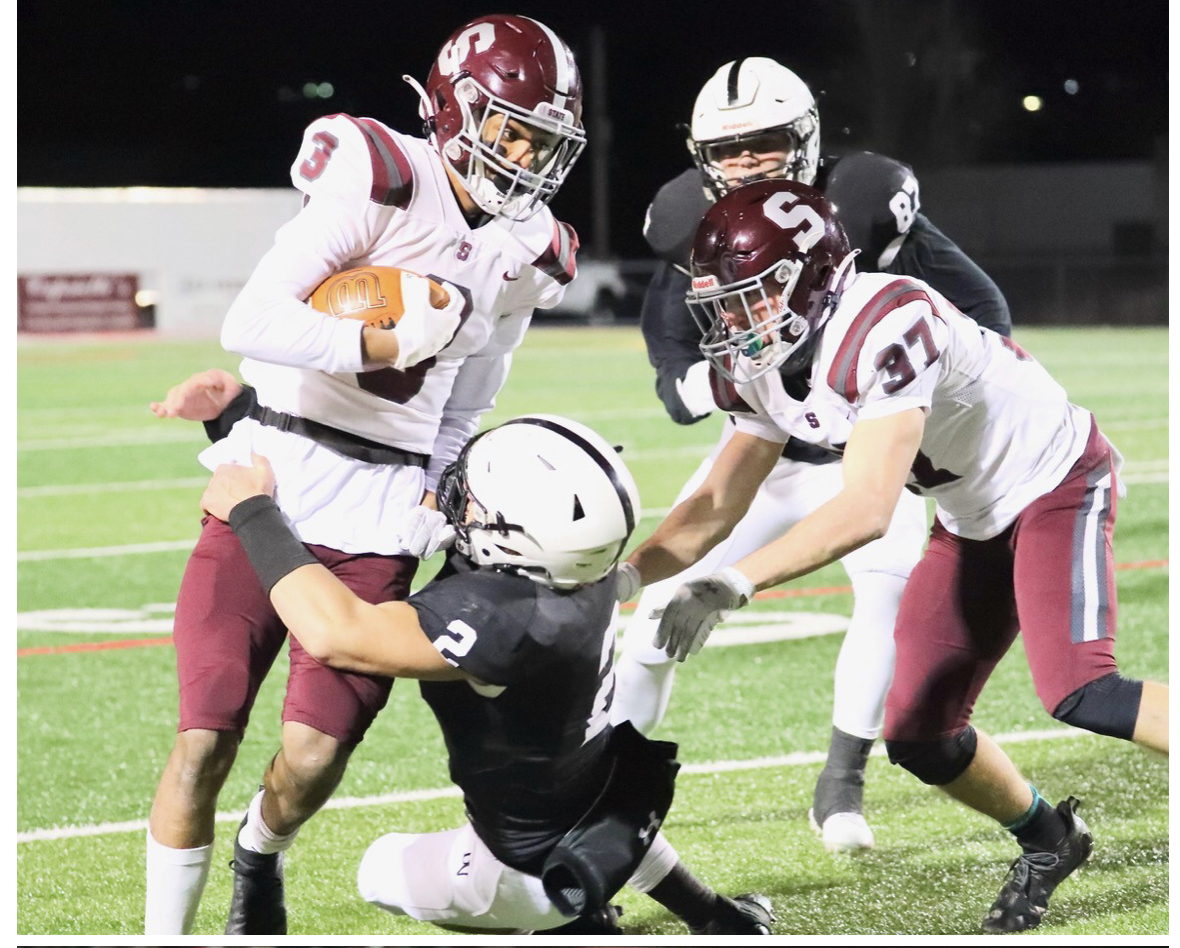 The Lions relied on a strong running game and a stout defense that kept Warriors star RB Joe Sciascia to under 100 yards and got two interceptions as State College took a hard-earned 28-19 victory over Delaware Valley at Harman-Geist Stadium. “This was a solid team-oriented victory. Several players stepped up and we got plays when we needed it the most.” Said State College head coach Matt Lintal. “Credit needs to go to our defensive coordinator, Mark Baney for our tremendous gameplan and we’re playing really good football.” he added.

The Warriors started with the ball and after CJ Ross found Aidan Black on a nine yard completion, Delaware Valley was forced to punt. On the first play, the Little Lions got a 27 yard run by Brady Bednik. The drive went 14 plays over 86 yards as Bednik ended up finishing off the drive with a four yard score as State College took a 7-0 lead with 2:21 remaining in the first quarter.

It didn’t take long for Delaware Valley to tie up the ballgame. The fourth play of the drive, Ross found Harlem Cook past the Lions secondary for a 54 yard touchdown pass to tie the game at 7 with 38.5 remaining in the first quarter. State College looked to answer. The Lions got into Warrior territory on the first play as Owen Yerka found Jashaun Green for a 21 yard completion to the Delaware Valley 38 yard line. State College faced a fourth and three from the Warrior 31 yard line and the pass fell incomplete. The Little Lions forced a three and out. However on the punt, the ball bounced off a State College player and Delaware Valley recovered. No damage was done as the Lions forced the punt.

Even though the Little Lions went three and out on their ensuing drive, the punt took a good bounce and the Warriors took over at their own three yard line. Delaware Valley faced a third and 8 and Ross’s pass ended up being intercepted by Will Stone and returned for a touchdown but a flag for a holding penalty took the touchdown off the board. Very first play of the drive, Yerko found Green for a 20 yard score and a 14-7 lead with 5:52 remaining in the second quarter.

The Warriors started at their own 14 yard line and Ross found Cook for an 18 yard completion on second and 8 to their own 34 yard line. Cook then ran for 10 yards on the next play. After a Ross pass to Jayden Ramirez for 12 yards on a second and 1, Ross found Cook for 27 yard completion to the State College 10 yard line for a first and goal. The drive ended with a 24 yard field goal by Everett Bell to make it 14-10 State College with 2.9 to go in the first half and we hit halftime with that score.

The Little Lions started with the ball in the second half. The drive ended in a fumble that was recovered by Delaware Valley. The Warriors drove down the field where they faced a third and 8 at the State College 38 yard line as Ross went to Cook for a 23 yard completion. After a holding penalty on second and 10 backed it up to a second and 20, the Warriors faced a fourth and 20 and Ross tried going to Cook, the pass fell incomplete as Cook was interfered with. Delaware Valley elected to kick a 29 yard field goal by Bell and the Warriors made it a one point game at 14-13 with 5:56 remaining in the third quarter.

The Lions continued to move the ball at will as they drove all the way to the Warrior 14 yard line as we head to the fourth quarter. Very first play of the fourth, Yerka found Stephen Scourtis for a 13 yard completion to the Delaware Valley one yard line. Yerka scored from one yard out and made it an eight point game as State College took a 21-13 lead with 11:14 remaining in the game.

The Warriors faced a third and 8 down eight points and Ross found Cook for a ten yard completion. Same drive, they faced a fourth and three and Joe Sciascia ran for nine yards. The drive relied on the ground game at this point as Delaware Valley ended the drive with a four yard touchdown run by Paulie Weinrich. They went for two but could not get the two point conversion to tie the game. The Lions still maintained a 21-19 lead with 5:24 remaining in the game.

All State College needed to do on the drive is get several first downs. The Little Lions got some first downs and then some as Yerka ended up scoring his second rushing touchdown of the game from 24 yards out. The PAT made it a 28-19 game with 1:10 remaining. Delaware Valley’s last ditch effort ended up being intercepted by Stone for his second pick of the night and took a knee at the one yard line instead of scoring. “That was unbelievable. That’s hard to do when you have a touchdown right in front of you as a defensive player, you don’t get to score too often.” Linton said. The Lions wasted out the clock as they advance into next week’s 6A State Quartefinals.

Delaware Valley saw their nine game winning streak come to an end after starting the season 0-3. Despite the loss, senior wideout Harlem Cook had an excellent game with six catches for 141 yards and a touchdown. “He’s a really good athlete and he’s going to be a tough one to replace.” State College goes to 7-5 on the season and advance to the State 6A Quarterfinals and will take on the Champion out of District 3.