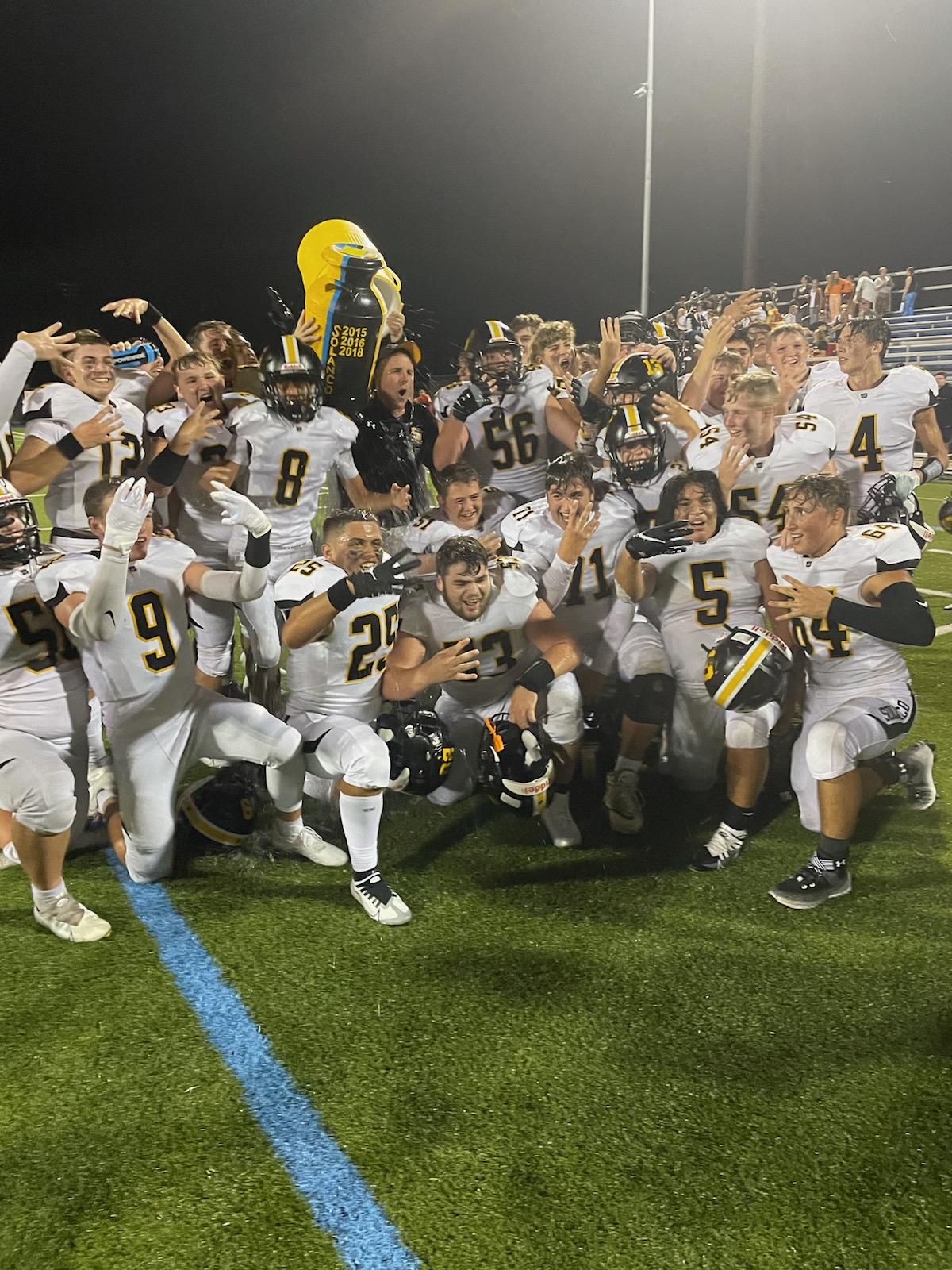 A Mid-season review of the LL-Berks League

The halfway point of the LL Berks season hit us about as soon that the weather went from 90s and humid to 60s and cold. Hard to believe how fast it has moved but it has been filled with offensive explosions, defensive stalwarts, and overall good football. We broke down where each section stands and some standouts/surprises with the new merger.

Solanco is poised for a playoff run

For Section 1 the usual suspects Hempfield and Wilson lead the way at 4-1 but believe it or not Penn Manor at 3-2 (2-0 in section play) is tied with them in first place. The Comets got off to a slow start at 1-2 but back-to-back wins against Cedar Crest and Reading have Coach Brubaker’s squad on solid ground. Manheim Township is a total of 6 points away from being undefeated, with losses to rival Hempfield and Cumberland Valley setting the Blue Streaks back. Expect to see them back in the hunt in the next five weeks as they usually are. The big question for them along with Penn Manor and Hempfield is who can take down Wilson?

First half MVP: Cameron Jones RB Wilson- It took a few weeks, but the Bulldogs are finally using the Holy Cross commit on offense. Jones has done it all this year for Wilson, while adding two more special team touchdowns, he has crossed the pylon 10 times out of the backfield. Averaging over 8 yards per carry, opposing squads now must worry about him in every phase of the game.

What we learned: Reading is heading in the right direction under first year Head Coach Troy Godinet. Cedar Crest will be frisky all season just like last year. McCaskey has miles to go but finally have a Coach who seems entrenched for the long run. Penn Manor while bitten badly by the injury bug may be on to something. Wilson is Wilson, they have 1 early loss but will not be forgotten come Section title time. Manheim Township will be scary good next season and Hempfield has the Coach of the Year in George Eager.

Whenever my colleagues and I discussed the new league alignments, this section always came up first and it hasn’t disappointed. Currently Manheim Central and Exeter sit atop at 5-0 setting up for a collision course in Week 10. Not only will that game more than likely determine the Section champion but expect the matchup to have playoff seeding implications as well. If Districts started today those two squads would be the league’s only representatives as Warwick and Governor Mifflin have struggled. Plenty of football left to be played; do not count out any of these schools, especially come early November.

First Half MVP: Brycen Arnold RB Manheim Central- While teammate Zac Hahn has done his thing, the Junior running back has been an unstoppable through five games. Averaging over 8 yards per carry, Arnold is an unselfish dual threat for the Barons that has shown no signs of slowing down. Other players that deserve recognition include quarterbacks Mason Rotelli (Exeter) and Jack Reed (Warwick).

What we’ve learned: Lebanon is much more competitive than a year ago. Watch out for Conestoga Valley in these next five games they are getting better each week. Muhlenberg can score on anybody. Governor Mifflin really misses Singleton (thank you captain obvious) but may be starting to find their identity. Warwick needs more from their defense; you don’t want to see Jack Reed not go out a winner. Exeter at Manheim Central October 28 – get your tickets now they may not be available soon.

To be honest when looking at the merger and new sections this off-season Section 3 did not have much standing out. This writer was proven wrong nearly out of the gate as Solanco (5-0) and Elizabethtown (5-0) have come out of the gate flying.  The Golden Mules have taken down rivals LS and Penn Manor, while the Bears, averaging close to 40 points per game, have yet to be slowed down. Not only are these two squads among the best in the district, three other teams (Garden Spot, Ephrata and Twin Valley) all have winning records. Expect to hear from each of those schools come District 3 playoff time as they are going to be tough outs.

First Half MVP: Josh Rudy QB Elizabethtown- With apologies to Garden Spot Quarterback Kye Harting (who leads the Spartans in rushing too) and teammate Logan Lentz (14 touchdowns, 6.8 yards per carry), we went with the Bears signal caller Josh Rudy. The Senior Rudy has been nearly flawless in the first five games under new first year Head Coach Keith Stokes, leading Elizabethtown to one of their best starts in school history. Rudy has thrown for 11 touchdowns already this year and he also has the most passing yardage among all the quarterbacks in the entire league! A two-year starter it is time for this young man to get his proper recognition.

What we learned: Daniel Boone’s record is deceiving they have put up a fight each week. Fleetwood’s offense can be dangerous with Jack Rifle under center. Do not sleep on Twin Valley, their offense is starting to hum, and they will be a tough out. Ephrata will take on anyone and will not be forgotten in the Section title race. Garden Spot is not a team you want to take lightly at any time. Elizabethtown at Solanco will determine both team’s playoff seedings. Yes, I realize that game could be for the Section title but expect both schools to host home playoff games this year.

In what many say is the best Section in the entire LL-Berks league, the usual suspects sit on top, while one surprising contender has emerged. Wyomissing has had no trouble with the merger, remaining unbeaten with a showdown against Lampeter-Strasburg later this year. LS stumbled week 1 to Solanco but has been cruising since, averaging over 30 points per contest. Conrad Weiser stands alone in third place at 3-2 with big time victories over Elco and Fleetwood. Nothing has been decided yet but do not expect to see more than 3 of these schools in the district playoffs.

First half MVP: Trenton Wagner QB Lampeter-Strasburg – Wagner has kept the family tradition going replacing his brother Berkeley who left for Susquehanna last year. Trenton assumed QB duties and the Pioneers have not missed a beat, throwing for 10 touchdowns and 0 interceptions. Wagner will need to stay mistake free with battles against Conrad Weiser and Wyomissing upcoming.

What we learned: You must feel for Octorara, not only do they have the worst traveling schedule, the injuries and heartbreak are brutal. Looks like Donegal got the short end of the stick with the merger, do not count them out to finish 500 though. Elco is two plays away from being 4-1 or 2-3. Berks Catholic even at 1-4 still has a shot at the playoffs. While Cocalico may not make the playoffs expect them to have a word with anyone who must get past them. In a section that had 6 schools in district playoffs last season, who would’ve thought the Conrad Weiser Scouts would on the inside looking out. Goes without saying but Lampeter-Strasburg at Wyomissing on October 29 is must-see football.

The Lancaster Catholic Crusaders and Hamburg Hawks sit atop Section 5, both at 5-0. Both teams have taken on all comers and are set for a huge showdown this Friday. This game may determine the section champion as both schools have defeated their opponents by an average of 20 points and will be heavy favorites in their rest of their schedules. Schuylkill Valley and Annville Cleona are both very much in play standing at 3-2. Look for both to potentially nab District playoff spots.

First Half MVP: Pierce Mason RB Hamburg – Averaging over 13 yards per carry for the arguably most explosive offense in the league, Mason has been a one-man wrecking crew for the Hawks. With apologies to what Will Cranford has accomplished, the Junior running back has 16 touchdowns through five games! Can’t wait for their matchup Friday night to see if the Crusaders defense can slow him down.

What we learned: Columbia needs to regroup defensively if they want to return to districts. Pequea Valley has had it struggles in the second era of Coach Mike Choi. Kutztown needs to involve Jacob Lafferty (averaging 5 yards per carry) more in their offense. Northern Lebanon is starting to peak at the right time. Annville Cleona is 1 play away from being 4-1. Schuylkill Valley has done the best job transitioning into this new league. Hamburg will end up averaging over 40 points per game and Lancaster Catholic is loving this new merger.