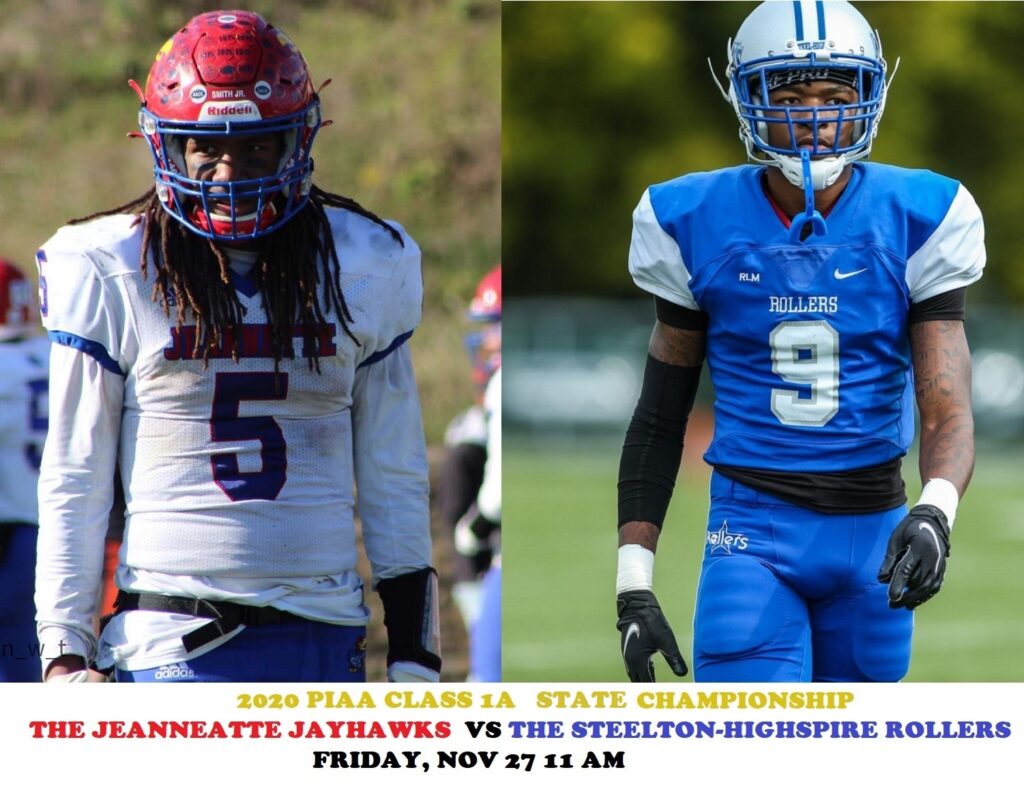 Steamroller coach Andrew Erby (49-30) has a team loaded with talent especially at skill positions.  Mekhi Flowers is a 4-star recruit and has made a difference offensively and defensively in a few games this year.  He has 940 yards receiving and 14 TDs.  Throwing the ball this year is freshman standout, Alex Erby.  He has tossed 31 TD passes and accounted for 2,307 yards through the air.  WR Damein Hammonds has 677 yards and 10 TDs.  Lest you think the ‘Rollers pass all the time, think again.  Odell Greene has 1,491 yards rushing and 14 scores.  Steelton averages 44 points a game.  Flowers has 4 INTs on the defensive side of the ball. The Rollers have been winning on the edge the past couple weeks starting with a close game with Delone Catholic. Their last three games have been decided in the last two minutes.

The Jeannette Jayhawks are coached by Roy Hall (115-26).  The Jayhawks have a freshman at quarterback too by the name of Brad Birch.  He’s pitched the pigskin for 1,676 yards and 28 TDs.  He got banged up a couple weeks ago and if he doesn’t play, Roberto Smith will step in.  All he did was throw for 277 yards and a score last week plus run for 3 more TDs.  Brett Birch has 40 receptions for 571 yards and 10 touchdowns.  Toby Cline has hauled in 33 passes for 513 yards and 10 scores.  James Sanders has 29 grabs for 590 yards and 10 TDs.  Smith is the regular half back and has 21 touchdowns and 780 yards.  The Jeannette defense and special teams are to be reckoned with because they have recorded 13 TDs in 2020, a phenomenal total.

Keep on keepin on. Erby needs to be a little more accurate than usual. Those Jayhawk DBs are probably the most athletic the Rollers have seen all year. Smith and Sanders are dangerous and can neutralize a good wide receiver. They’ll also look to get Odell Green running downhill.

This may seem repetitive, but both teams will have the same goals.  The Rollers will definitely need to play better in the middle of the field. It’s been a weakness and a team like Jeannette can see that. They’ll need to be more disciplined and keep the game in front of them.

Score points, get the ball in Smith’s hands. It’s that simple, or not. They’ll need to score often to keep up with the athletic wideouts of the Rollers. Establishing a running came can be helpful to slow the Rollers, that’s what BG did last week. But to win, the Hawks will have to give themselves more time to score.

Cover cover cover, keep Flowers and company blanketed, and if they can, do something no team has done all year, win the battle up front. The Jayhawks would do themselves a favor to get pressure on Erby. This game has all the makings of a shootout.