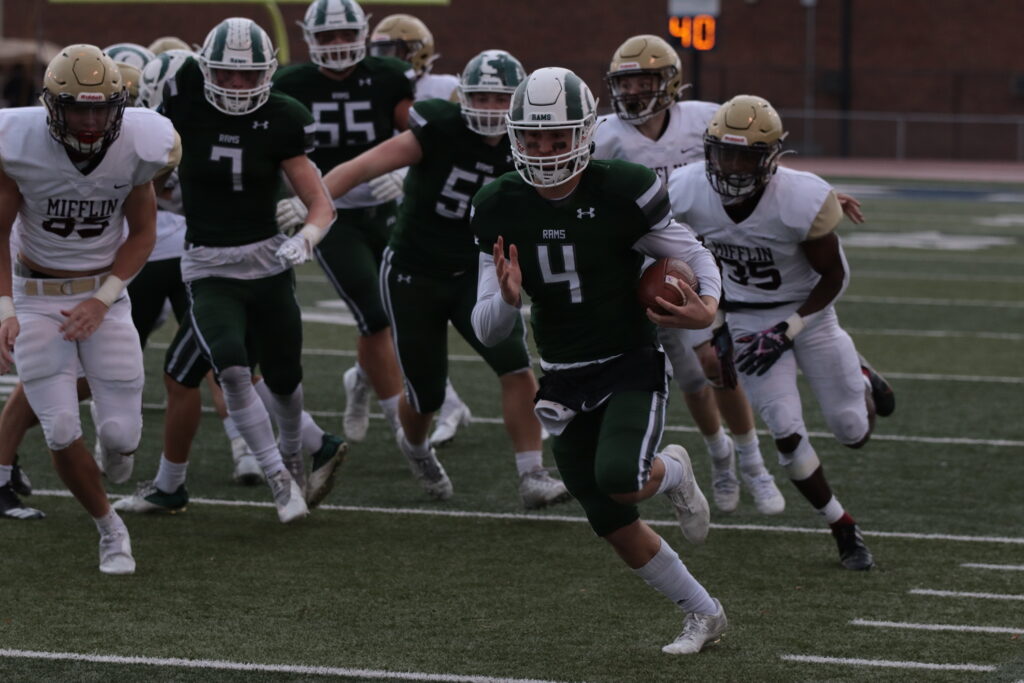 Gone! Cole Spencer completed the comeback for the rams with a 54 yard td sprint GALLERY BELOW

Today’s PIAA Class 5A semifinal game at Hollidaysburg was billed as the game of the weekend by many. Pine-Richland came into the the game with an air attack that couldn’t be stopped. Governor Mifflin came into this game running attack that couldn’t be stopped. Eventually something had to give, someone had to win,. The only wrong statement in those three sentences? “something had to give”. Both teams battled but one team made one more play than the other. Trailing in the game with just over two minutes to play, sophomore quarterback call Spencer Rihanna play. At the Rams have never run before. It looks like a play design to gain a couple yards on the left side call Spencer broke loose and out ran the entire governor Mifflin defense for a 55 yard game winning score. The Rams return to Hershey to face Cathedral Prep with a hard fought 48-44 win.

It was a game of separate quarters, governor Mifflin dominated the first quarter with three turnovers forced 21 straight points. On the very first play of the game, Cam Stewart batted a Cole Spencer pass high into the air and Mustang lineman Mason Klahr came down with the ball. Four plays and two defensive penalties Bandon Strausser crossed the goal line to give GM a 7-0 lead. On their next series, the Rams fumbled away giving the Mustangs the ball at the Ram 45. Ten plays later Nick Singleton gave the Rams their largest deficit of the season. In all, the Mustangs forced three turnovers in the first quarter. The Rams did manage to get to the Mustang 15 but turned the ball over on downs. The Mustangs turned that turnover into points also.

11 yard td for Strausser and the Mustangs are rolling. @GMSDAthletics 21-0 pic.twitter.com/Cty2sZzk8j

Pine Richland, trailing 21-0, took over the second quarter and eventually tied the game at 21. Following his third interception of the game, Spencer finally got in sync with his receivers. Spencer, who finished the game with 245 yards on 28 completions, found Charlie Mill for a 40 yard td to put the Rams on the board. Then it was Pine-Richlands turn to create a turnover or two. Caden Sweiger picked off Connor Maryniak at the Mustang 21. Brooks Eastburn made it 21-13 on this 8 yard run with 5::51 left in the first half.

Brooks Eastburn coming at you from the 8. Rams go for two and miss. @GMSDAthletics 21 @MalvernPrepFB 13. 5:51 left in the half pic.twitter.com/2Vbg1s4EyT

The Rams went for two but didn’t get in. Then, on the ensuing kick, the Mustangs fumbled the kick and the Rams were in business again at the 26. After an injury to Mustang linebacker Zack Parsons that required being taken to a hospital in the ambulance, Spencer went back to work and found Luke Miller for another score. Again they missed the 2 point play and the Rams trailed at halftime 21-19.

“The defense needed to bail us out because they didn’t play well in the first half, but that’s on me as a coach” said Eric Kasperewicz. “We made halftime adjustments but it all comes back to making plays. We needed to make plays.”

The second half didn’t start out any better than the first quarter did for the Rams.  The Mustangs attempted a quick pooch kick on fourth down but a Ram player had a mental slip and touched the ball. GM recovered at the 18 and Brandon Strausser finished the drive to put the Mustangs up 28-19.

Brandon Strausser coming at you from 3 yards out, @GMSDAthletics 28 @PRRamsFootball 19. 19 seconds left in the half pic.twitter.com/5s8ZYfjFnm

Spencers fourth interception came on the very next play. Greg Suber returned the rock to the Ram 17. Strausser scored again, his fourth of the game, and just like the the Rams were down 41-19, this time a 22 point deficit.

The Mustangs dominated the third-quarter but Pine Richland managed to make some key defensive stops and take their first lead of the game. On their next drive, Spencer led the Rams downfield in a nicely executed yet quick three play drive, culminated with a 29 yard td pass to Eli Jochem. That was the spark the Rams needed. and Jochem lit the match on the next drive that lit the fire for the Rams.

Spencer found a wide open Jochem for the 48 yard score and the momentum was clearly with the Rams. As was the luck of the kick as on their next possession, Marnyiak’s punt from deep in their own territory shanked and the Rams were in business again at the Mustang 31 heading into the fourth quarter. Cole Schweiger scored from 12 yards out, then Spencer hit Jeremiah Hasley for the 2 pointer to complete yet another three score comeback for the Rams.  With 11:40 to play, we were tied at 41.

On the next drive, the Ram staff sent in a play that Spencer admittedly had no idea how to run. “I never ran it before” said Spencer. “I saw daylight and just ran.” He ran 54 yards for the first lead of the game for Pine-Richland.

Undaunted, the Mustangs took over and went on a bruising, 17 play drive that sucked up over 8 minutes of the fourth quarter. The end of the drive had ups and downs. Two five yard penalties and a sack pushed the Mustangs back from the 15 to the 33 but on third down the Rams were hit with a roughing penalty that gave GM new life but after three plays they were forced to take a 44-41 lead on a 34 yard field goal.

The Mustangs had one last gasp with 2:18 to play, but on fourth down Miguel Jackson destroyed the play, sealing the win for the Rams

“If we didn’t win Id’ be just as proud but they didn’t give up. Great life lessons in that game” said Kasperewicz. 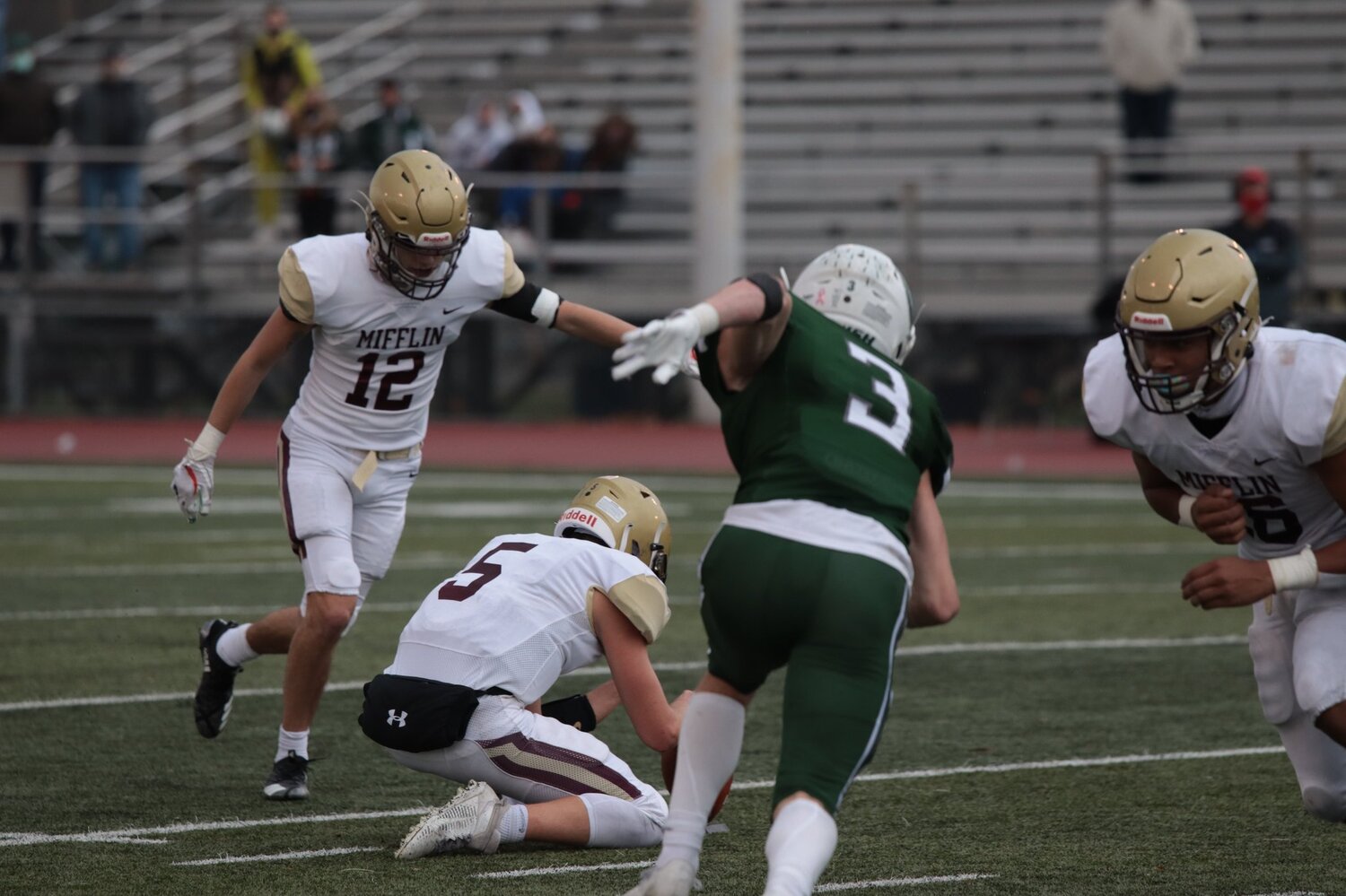 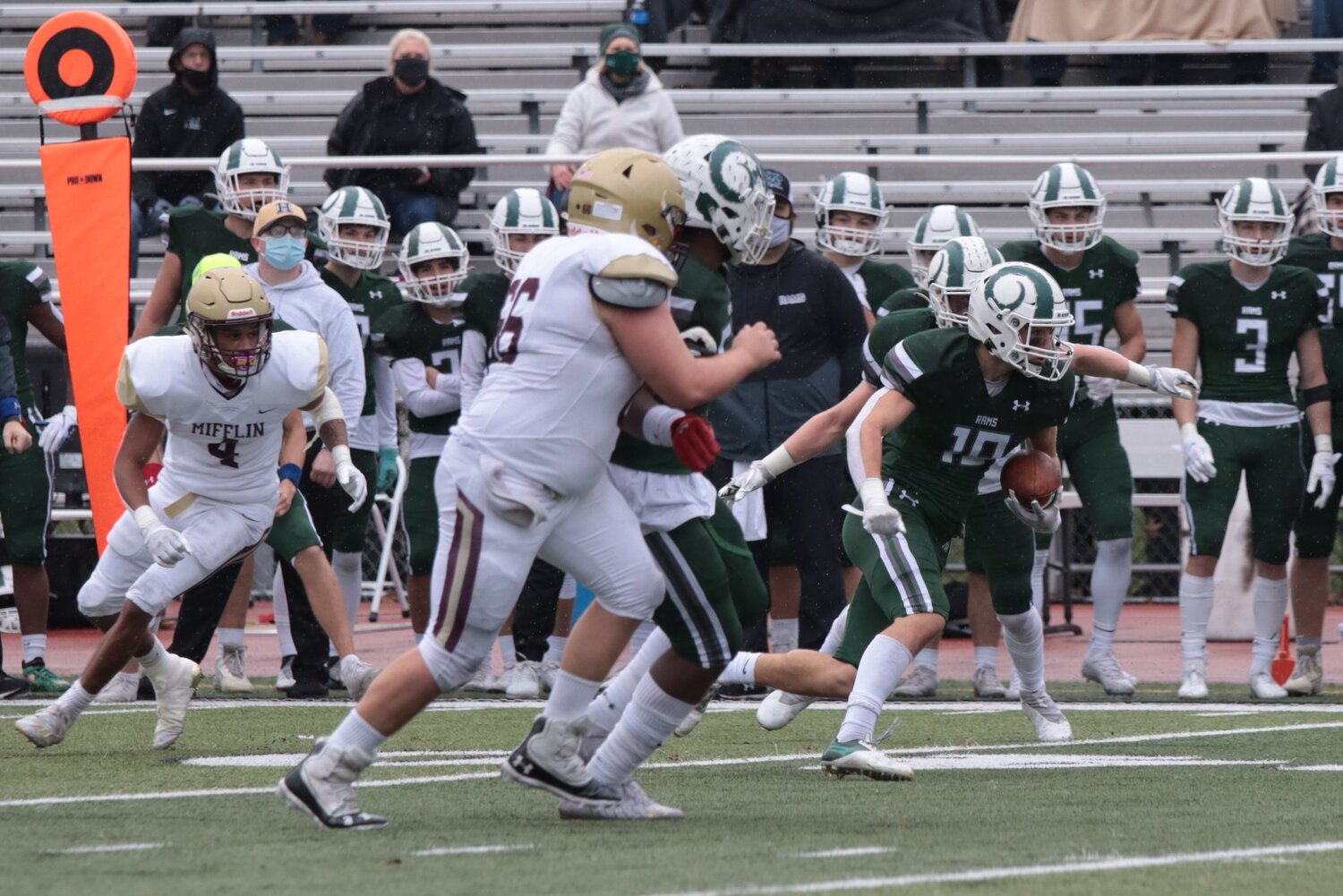 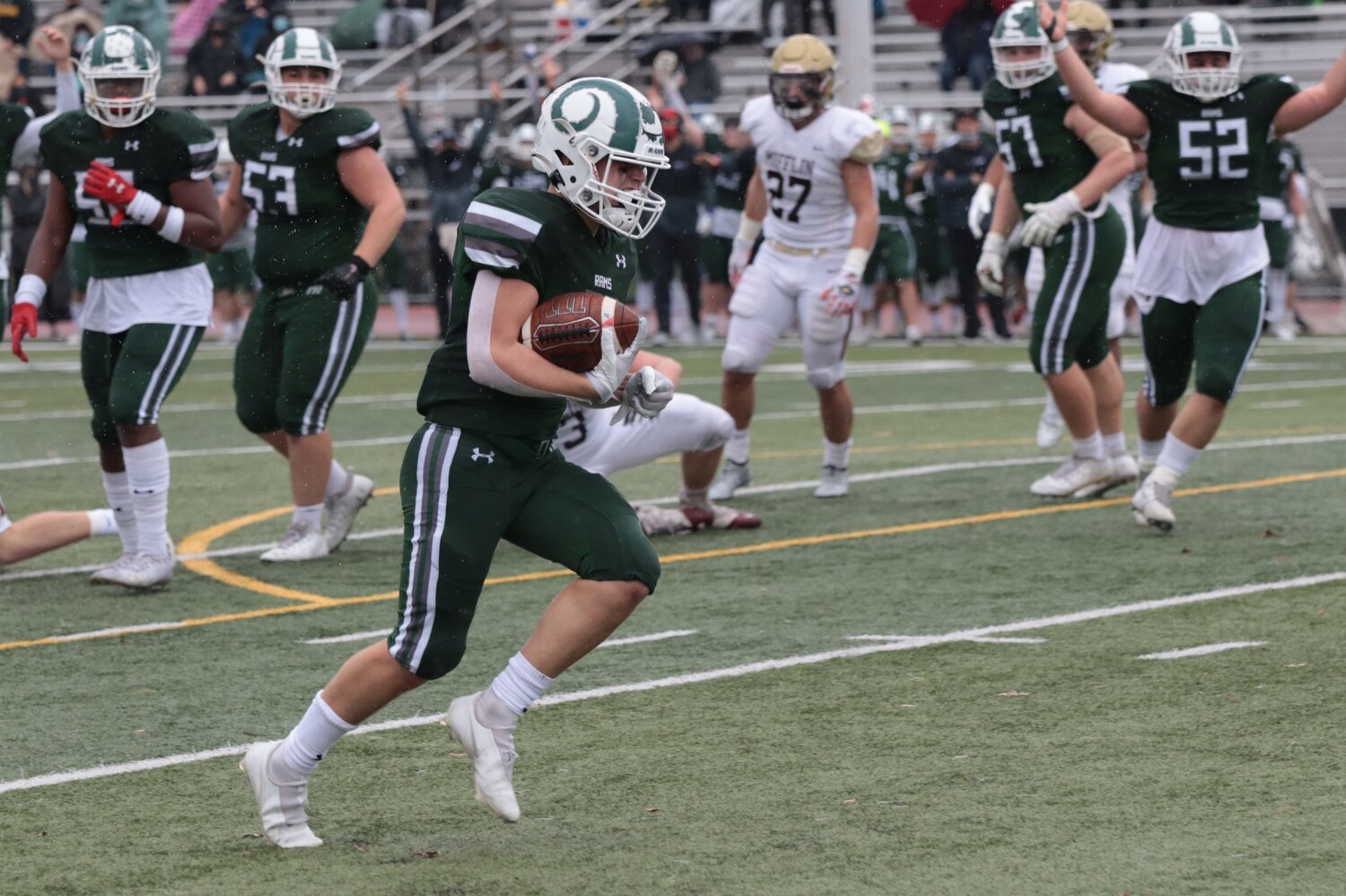 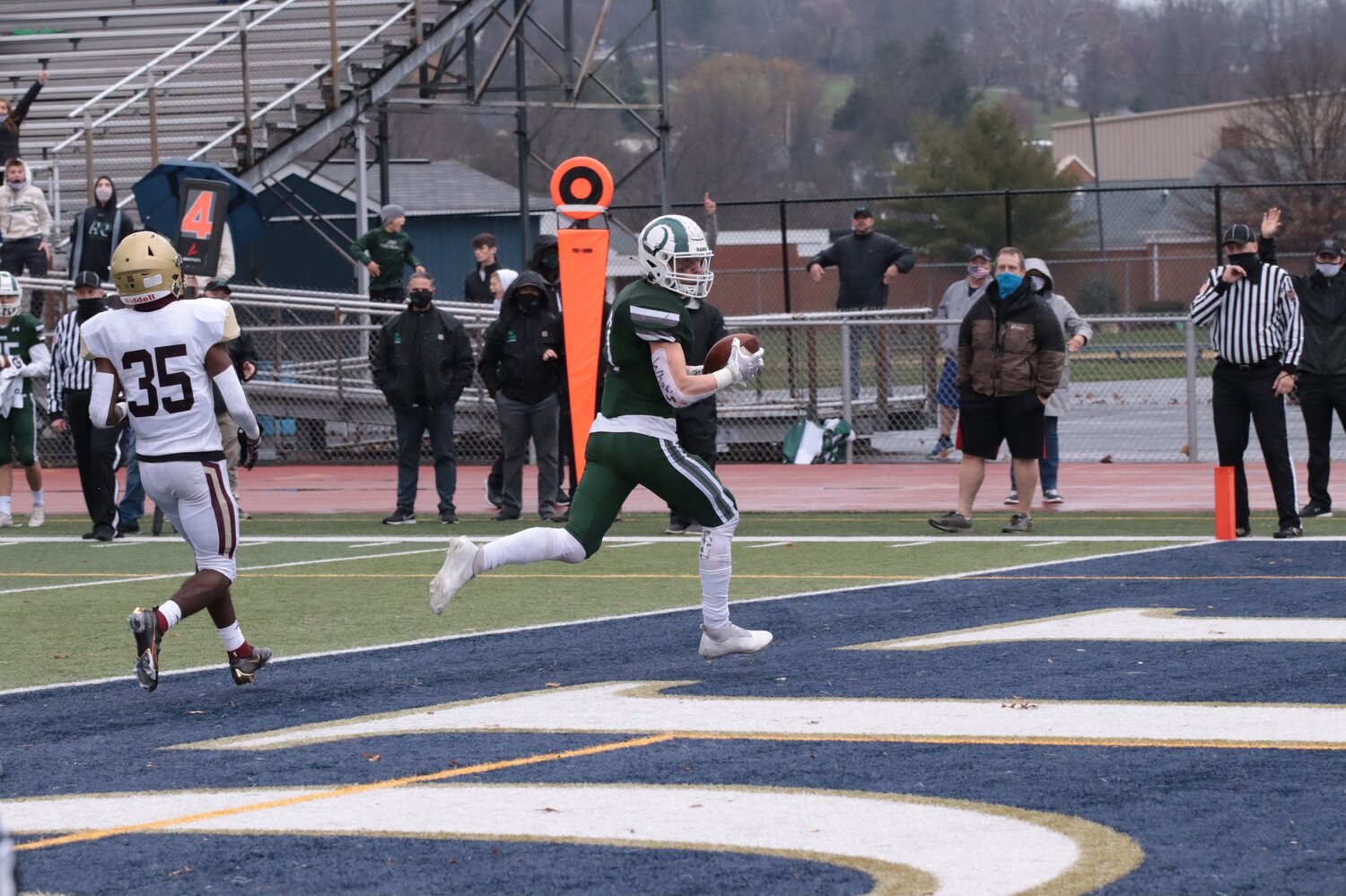 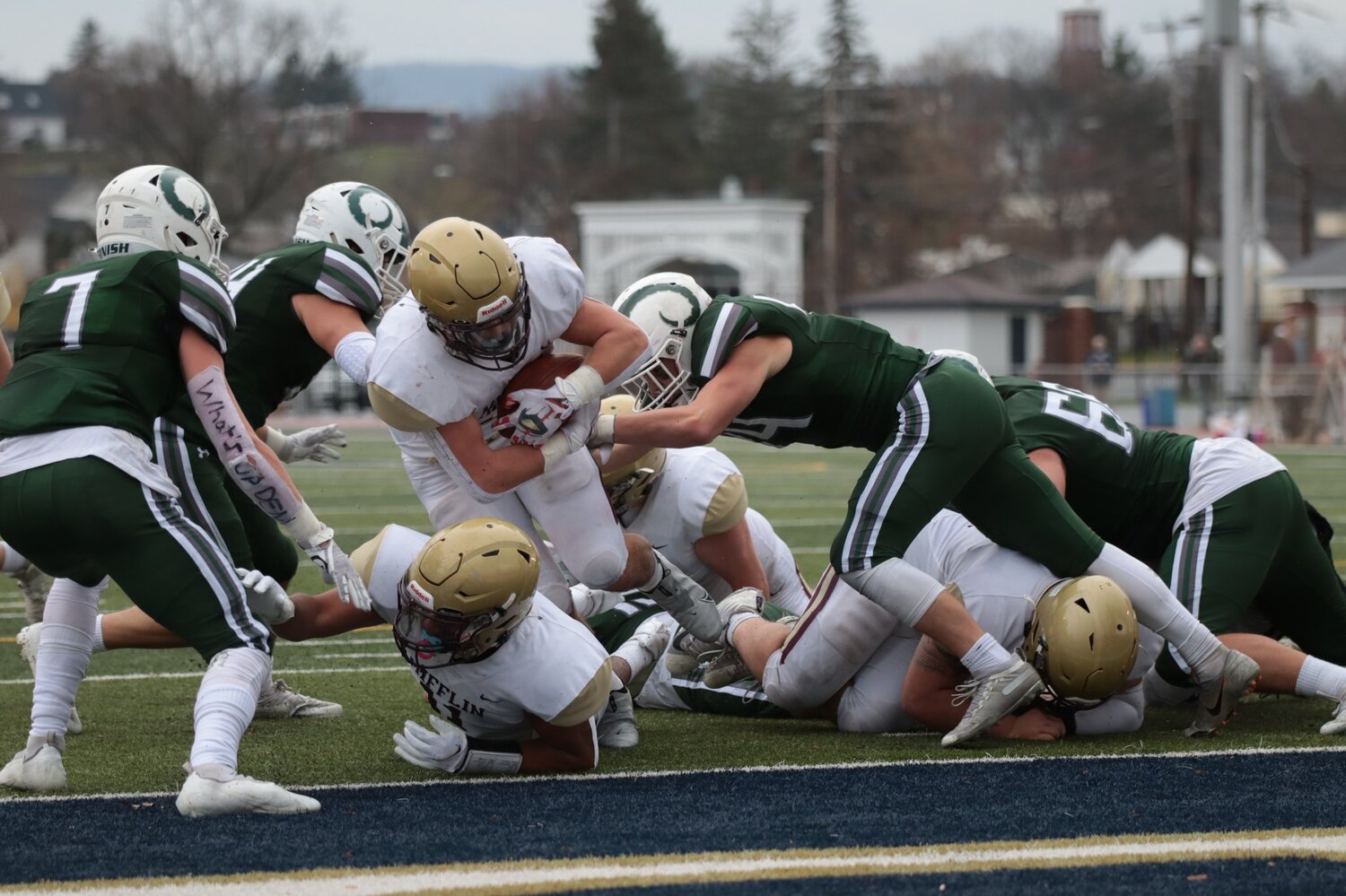 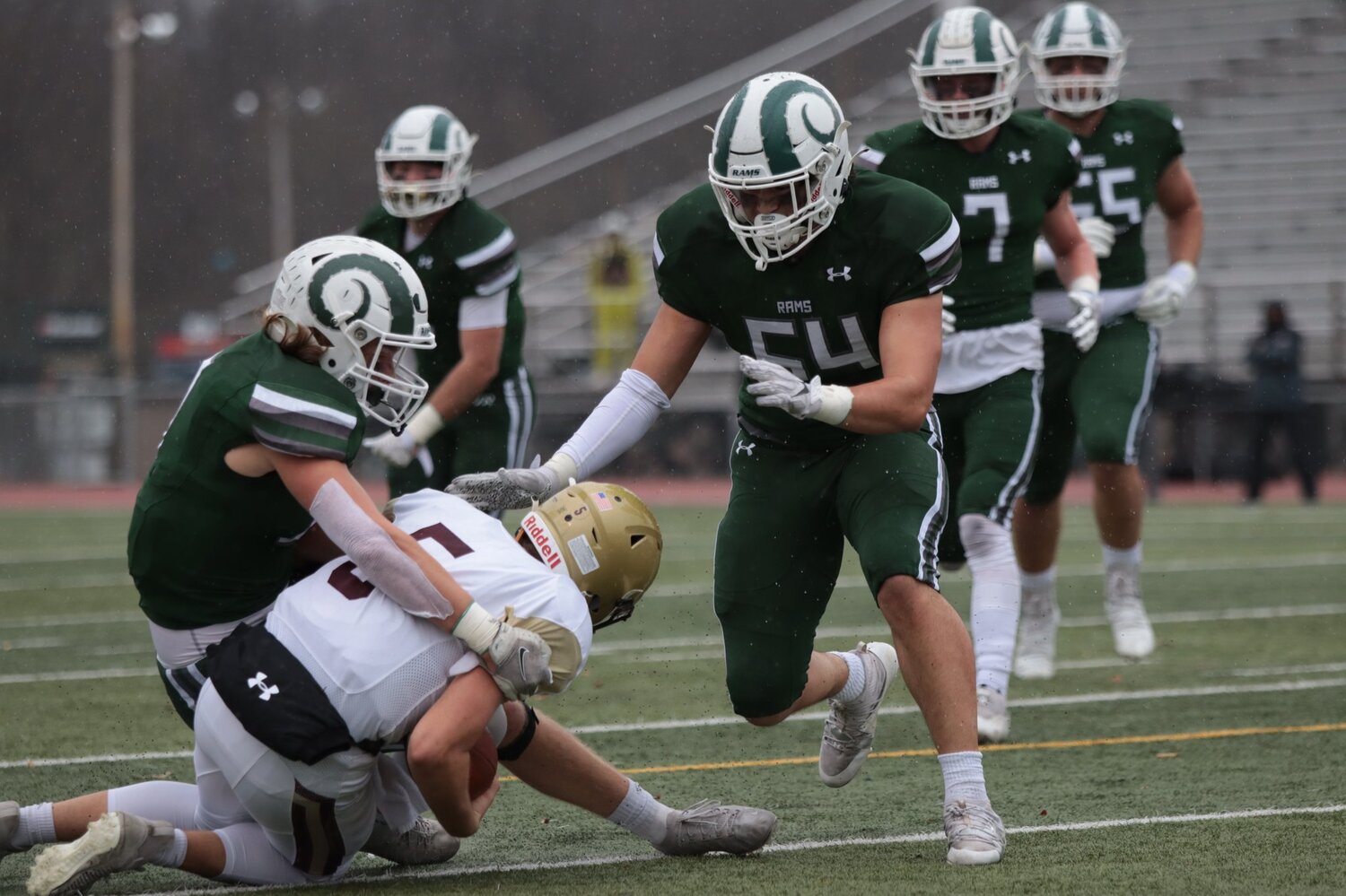 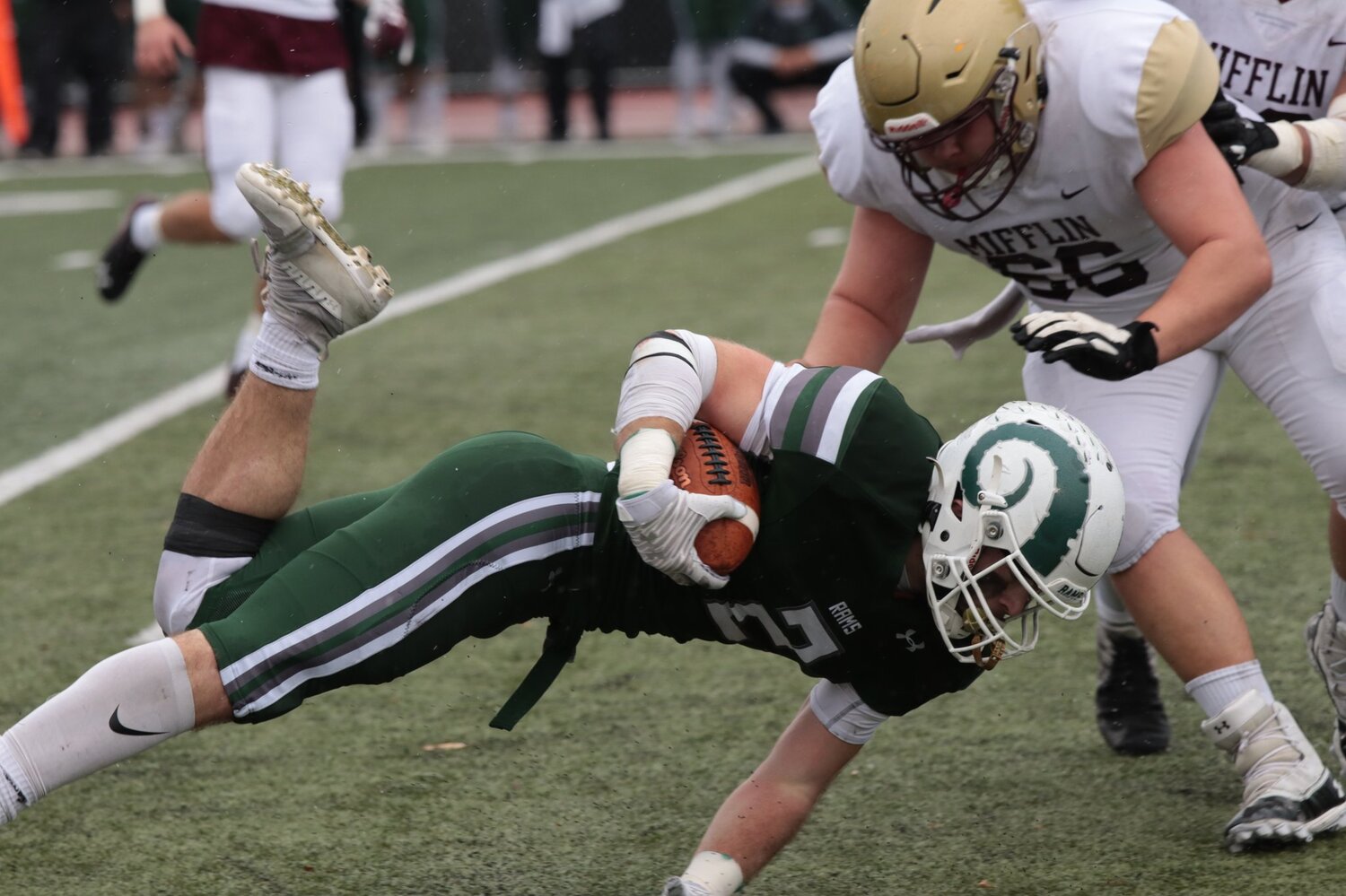 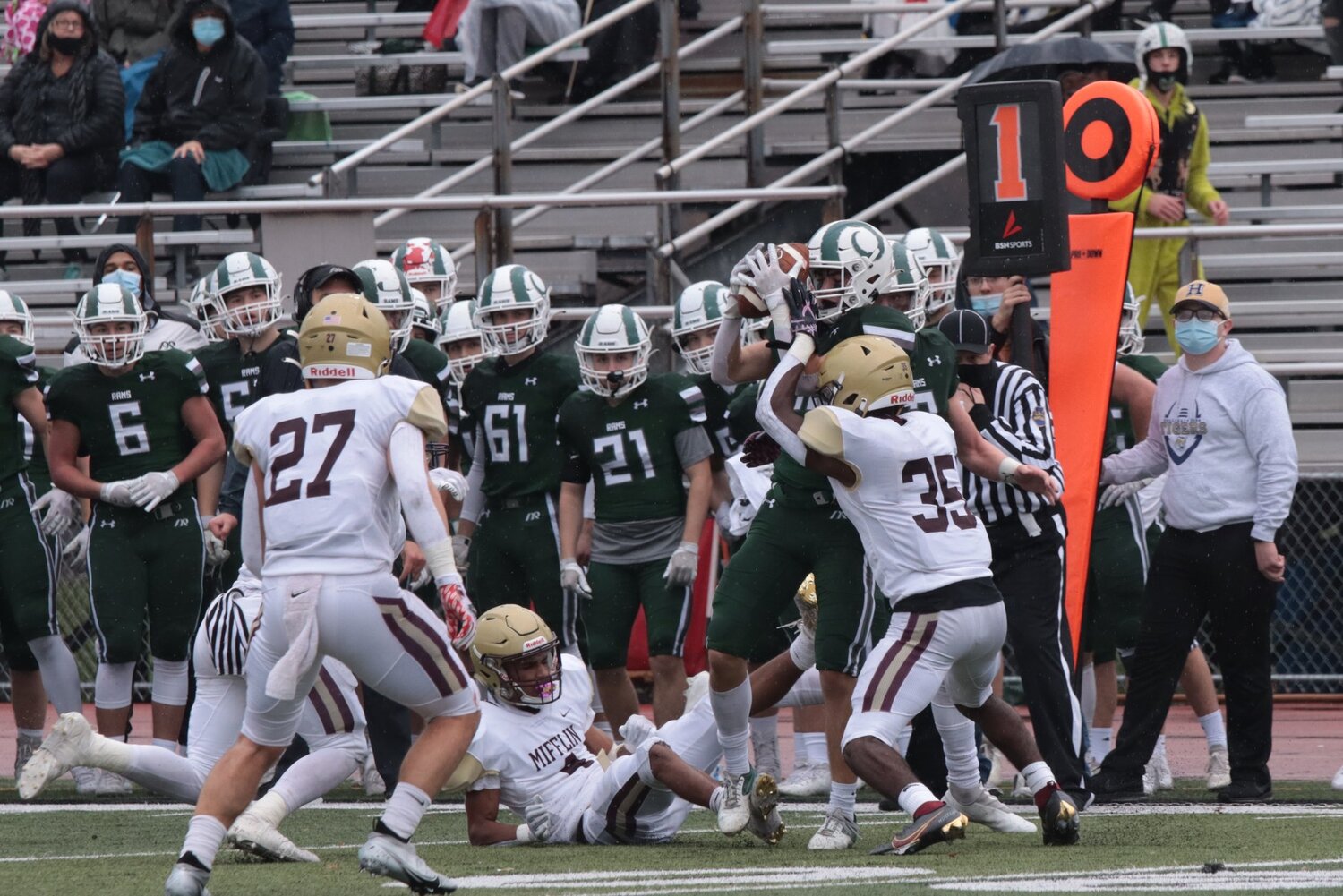 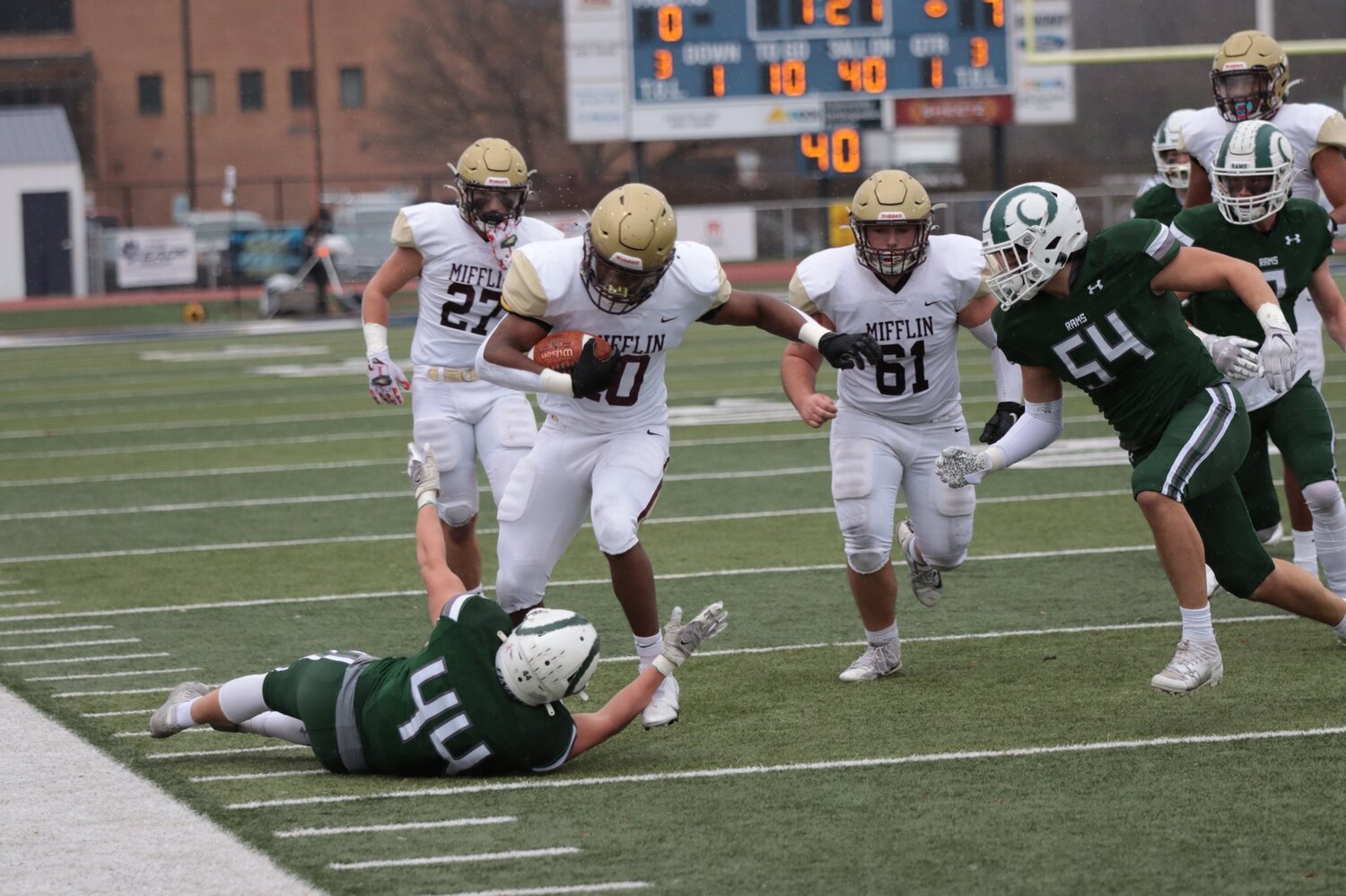 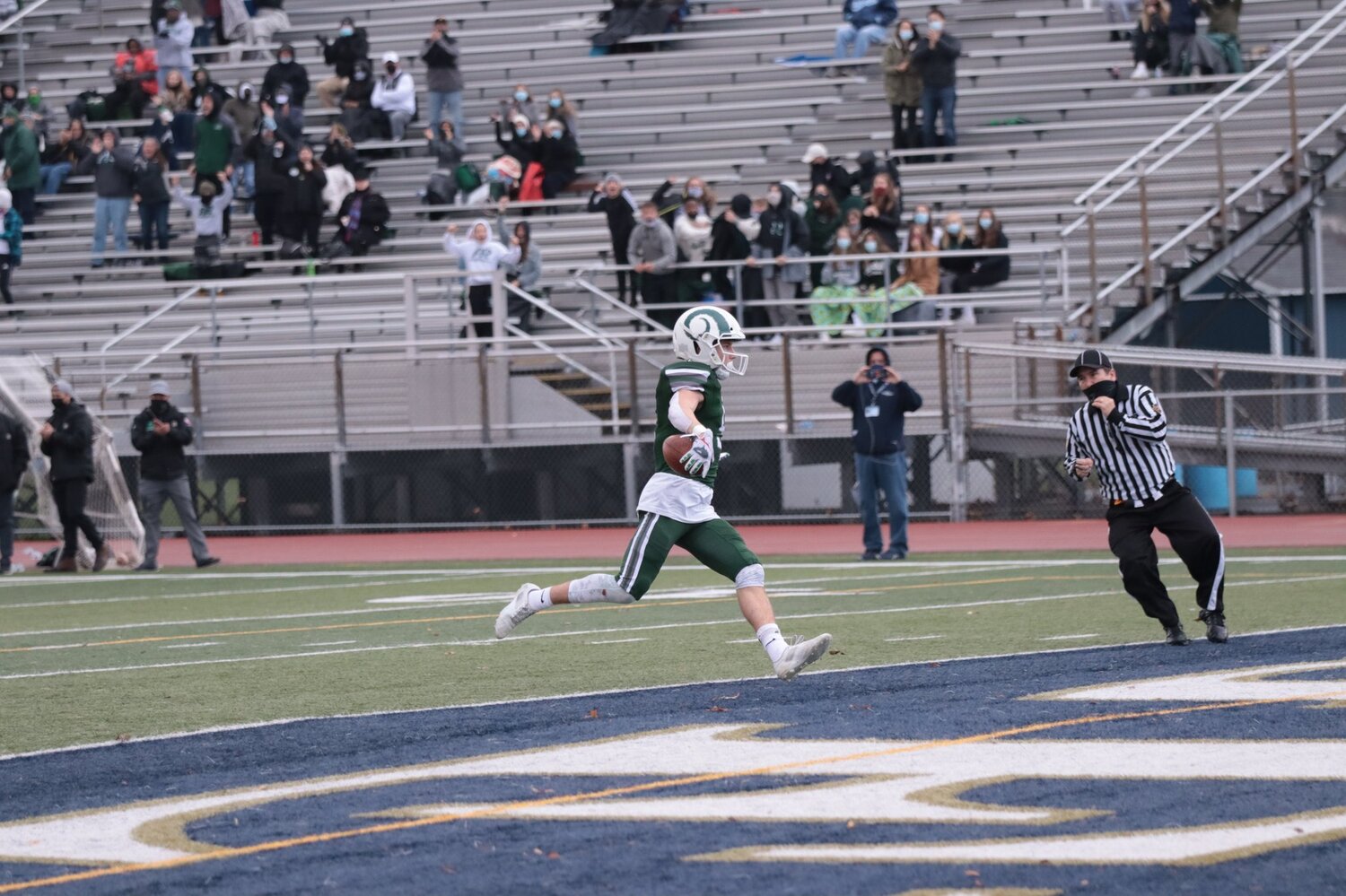 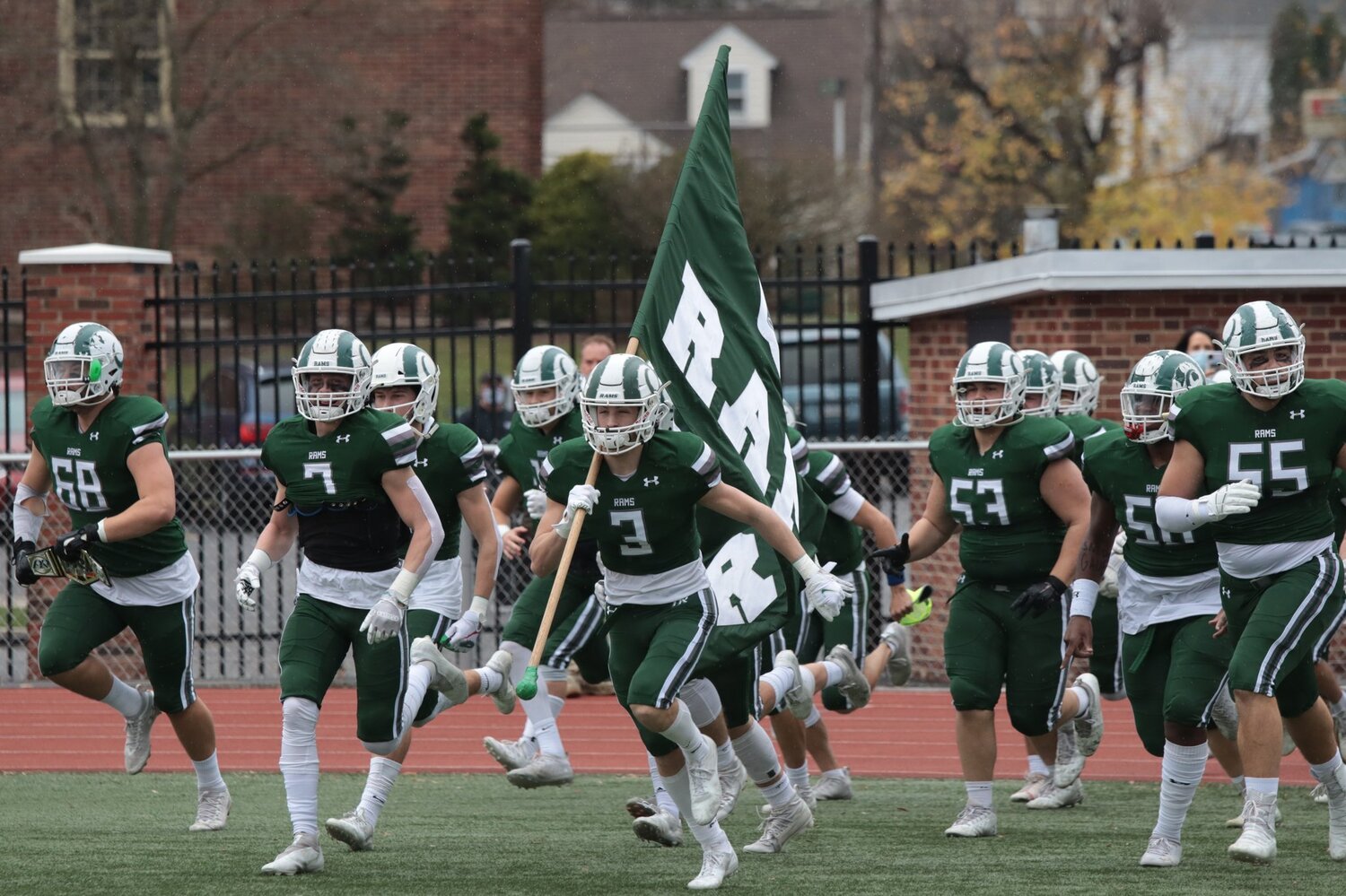 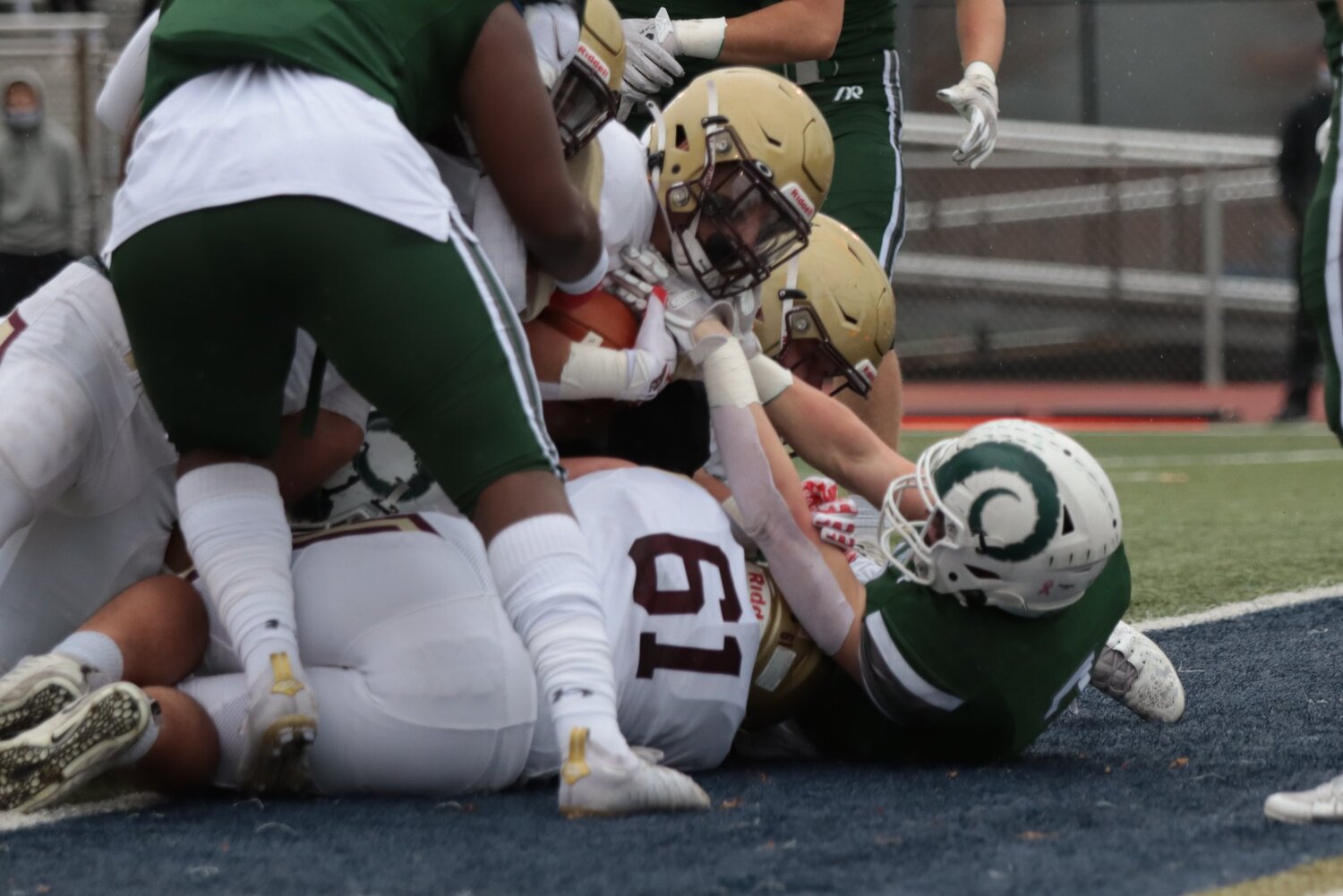 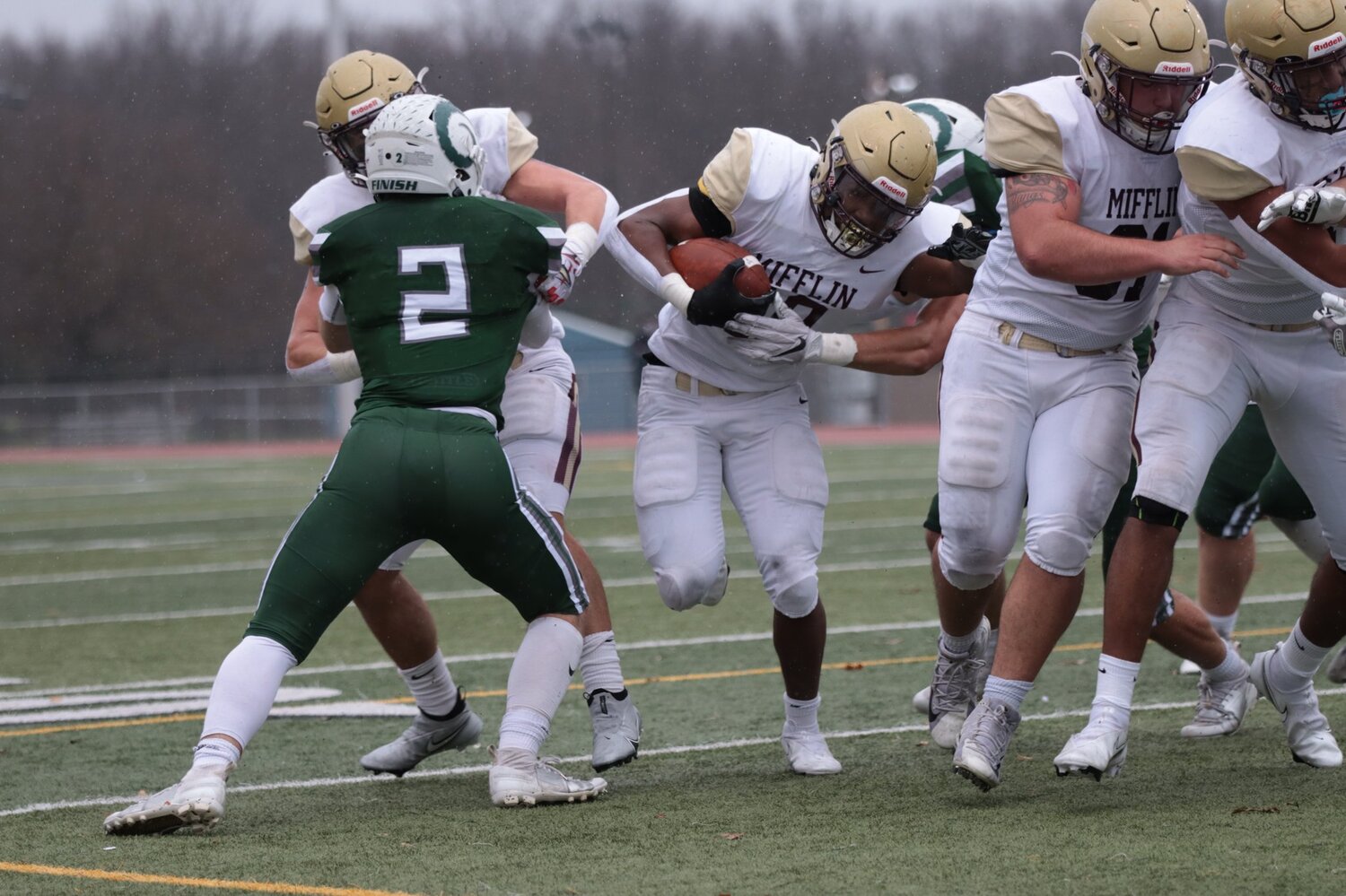 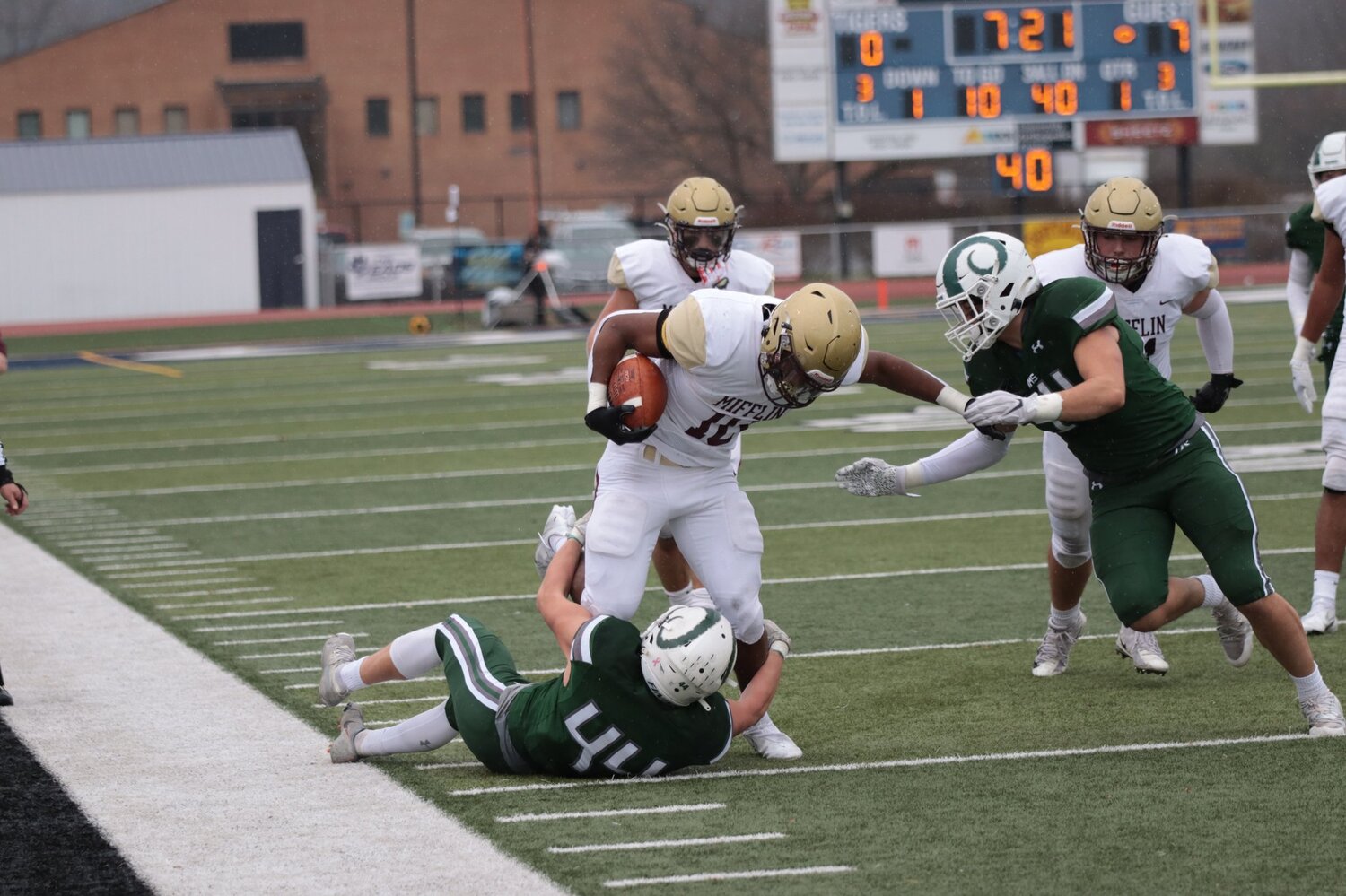 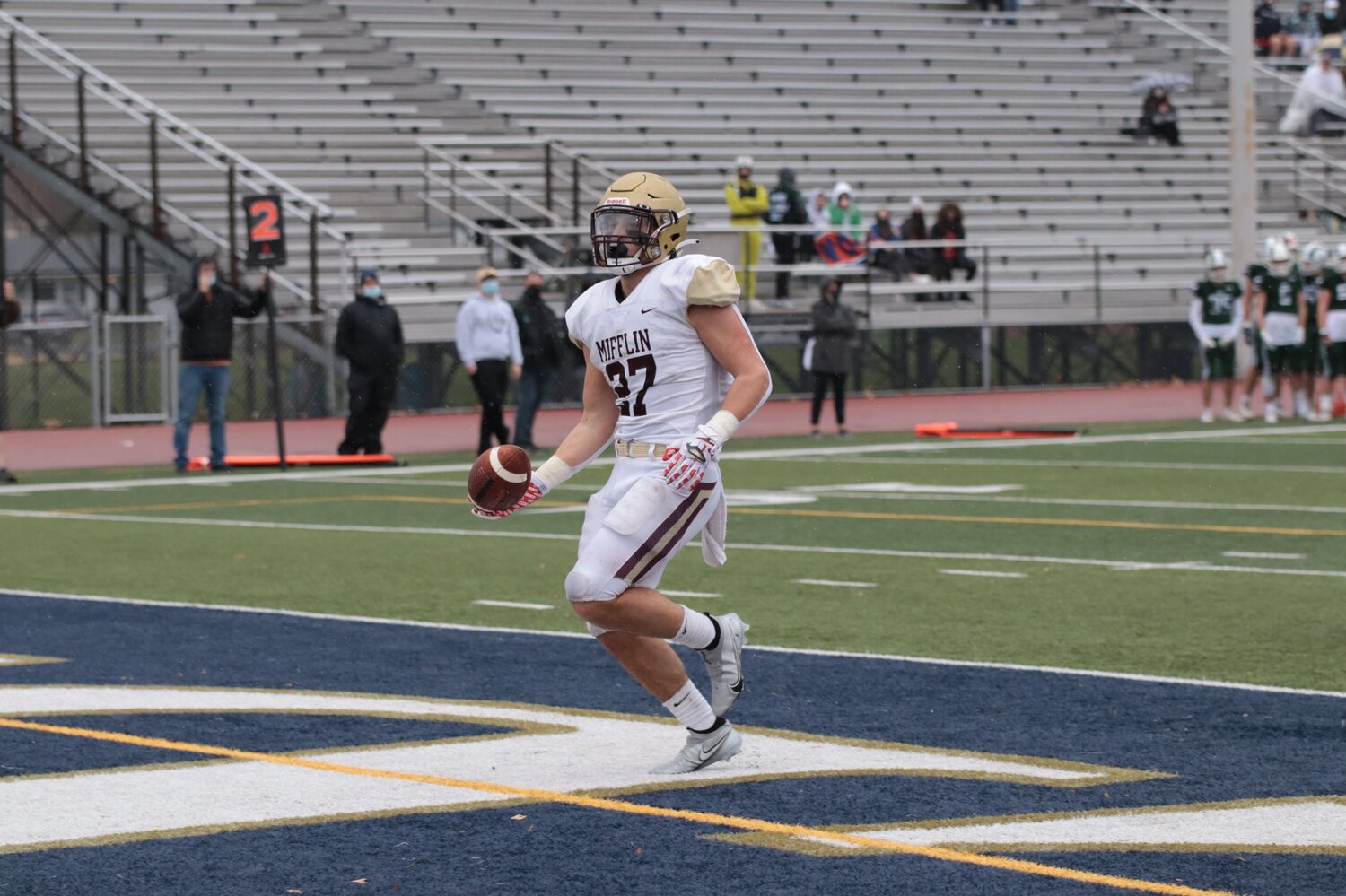 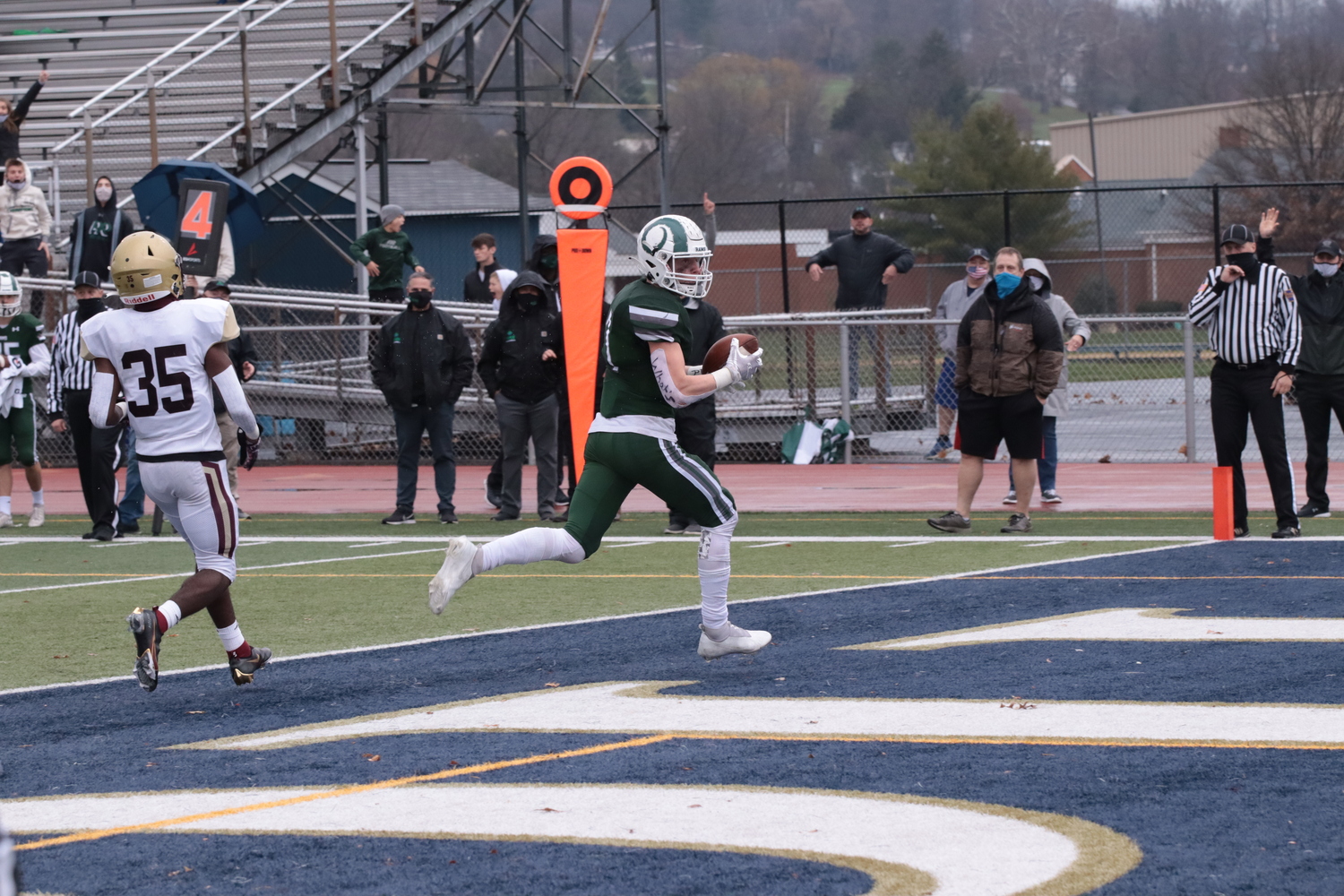 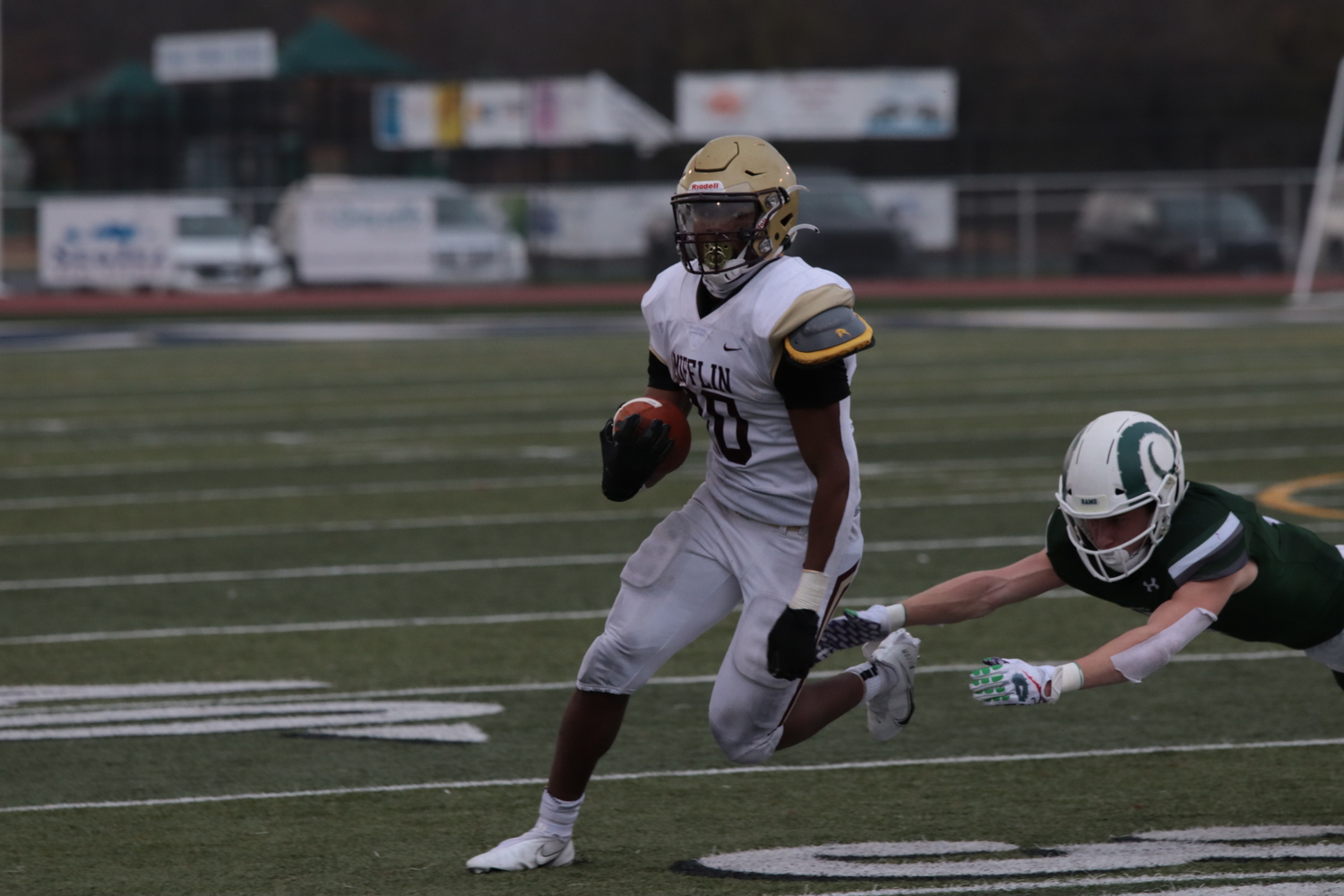 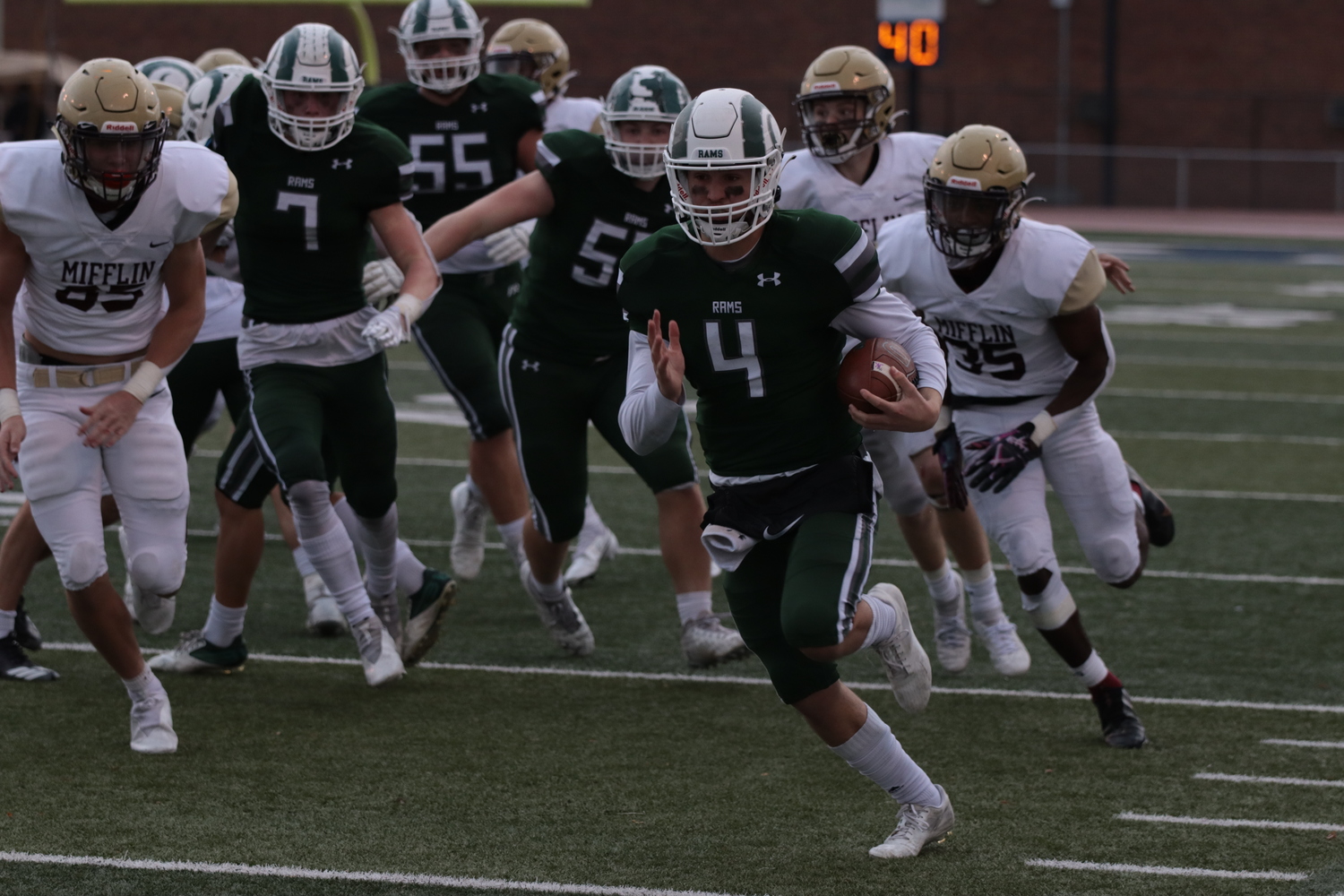 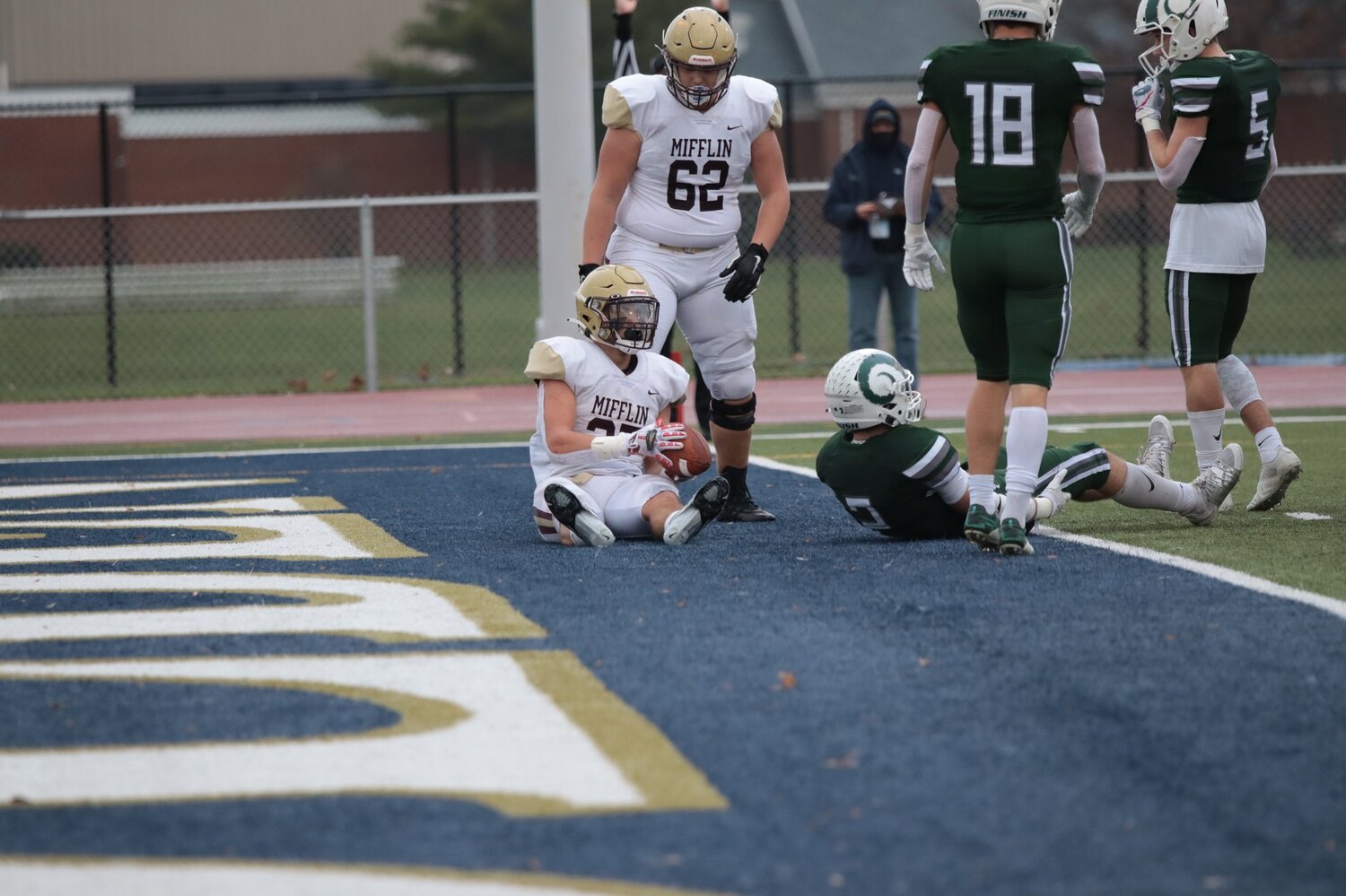