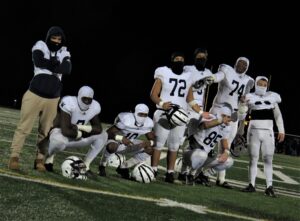 As some of you may have noticed the last few weeks, I started a new trend for myself to try to speak with each head coach before the game to get a feel for what they might be feeling, thinking. Last night was no different as I spoke with Wyomissing head coach, Bob Wolfrum before the teams would take the field. Coach would tell me in his ever so calm voice, the only way to control, and keep up with the Saints speed on offense is ” to be disciplined, everybody needs to be exactly where they’re suppose to be. ” Neumann-Goretti would win the toss and elect to receive to start the game. On the opening drive, Wyomissing was caught off guard some when starting quarterback for the Saints, Marcui Adams did not start due to an injury and would fall behind for the first time all season 6 to 0 when Goretti would go 78 yards on 12 plays, all runs to open up play. Junior DB/RB Shawn Battle would lead the charge running the ball out of the wildcat if you will, with Marqui on the sidelines, 8 times for 51 yards, finishing with a 2 yard touchdown with 6:08 to play in the first quarter. ” They ran a different offense, we were still playing our defense based on what we thought we were going to see ” said Coach Wolfrum.  It was now time for the Spartans turn on offense. The drive would begin from their own 30 yard line and like every game during the season, and playoffs, the Spartans would run at will against a tough, fast Saints defense that was only giving up an average of about 67 yards rushing. Wyomissing would march down field to the Saints 6 yard line before the drive would stall and turned the ball over on downs. The drive would go 8 plays for 64 yards before stalling. The Spartans would quickly adjust and hold the Saints on their next drive, making Goretti punt after just 6 plays. Wyomissing would take over at the Saints 46 and go to work.

Now, in the second quarter of play with the Saints still clinging to that 6 to 0 lead, Wyomissing would put together a 6 play, 46 yard scoring drive capped off by a 15 yard touchdown run by Drew Eisnehower with 7:50 still to play in the half, now with the Spartans in the lead 7 to 6. Following the kickoff, the Saints would fumble just 16 seconds later, and was recovered by Wyomissing at the Spartans 46. Six plays later, the Spartans were facing fourth down and 4 at the Saints 35 yard line and would go for it. Quarterback Ben Zechman would hit Tommy Grabowski for 11 yards and a first down. Three plays later, Grabowski would rumble into the endzone from 4 yards out to give the Spartans the lead 14 to 6, 3:14 left to play in the first half. Goretti would be forced to punt once again giving the Spartans another chance to score before halftime. Wyomissing wouldn’t do much on their next series going just 3 plays and punt back to the Saints as time expired to the end the first half with Wyomissing leading 14 to 6.

Coming out to start the second half, the Spartans would receive the ball with the momentum definitely on Wyomissing side, and ” that’s what you always want ” said Spartans Coach Wolfrum, “now we gotta take some time off the clock, and hopefully score again. ” “We’ve settled down, adapted to it, I think we’re solid on defense now ” added Wolfrum before the second half kickoff. The Spartans would start the drive at their own 41 and we were suddenly off to the races. 6 plays, 59 yards, just 2 minutes 32 seconds later, we had ourselves a 21 to 6 ball game when Drew Eisenhower would score his second touchdown of the game, this time by way of reception for 8 yards from QB Zechman. Wyomissing would force a 3 and out and the Saints would once again have to punt. Spartans Aiden Mack would come up big with the block and Wyo would recover, and take over at the Goretti 21 and just 4 plays later, Charlie Mcintyre would score on a 10 yard pass from Zechman, his second td pass of the game and Wyomissing had a commanding lead 28 to 6 with 6:42 to go still in the third quarter. Another quick 3 and out for the Saints would have Wyomissing with the ball on their own 43. On the next play, Amory Thompson would take off for 57 yards and the quick score to add to the Spartans lead, now 35 to 6, 5:20 to go in the third. The Spartans weren’t done yet in the third quarter, as the Saints would again punt after just 4 plays and Wyomissing would have the ball back again at their 43. Nine plays later, the score would be 42 to 6 when big #7, J.J. Jackson would power his way into the endzone with :36 seconds to go in the quarter to begin the rolling clock.  On the drive, big TE Aiden Mack would get his first reception of the game, for 17 yards.

In the fourth quarter, it would basically clock management for the Spartans, and desperation pass attempts for the Saints. Marqui Adams did come in to play at times, but you could see he just wasn’t good to go. Coach Crosby did mention after the game that Adams was only about 30% healthy but gave him a chance to play however it just didn’t work out as the Saints would again, turn the ball over on downs at the Wyomissing 14 with 10:30 to play. Wyomissing would run off just over 7 minutes on the 8 play drive, punting to the Saints, who would take over at their 37 with 3:07 left to play in the game. The Goretti drive wouldn’t last long however as, #9-Logan Hyde would intercept the Saints pass and take over at the 45, 2 run plays later, and a kneel down would end the game with the final score, Wyomissing – 42, Neumann-Goretti – 6 !

After the game, I had the pleasure to speak with Saints Head Coach, Ablie Crosby about his thoughts on the game and this is what he would say… ” the second half, Wyo did a phenomenal job, when they came out that first drive and they went down the field and they had nice plays, they were able to go up 21 to 6, by going up 21 to 6, we tried to get our quarterback, who was injured, give it a shot, we had a three and out I believe, and then they block the punt, so when they blocked the punt, that was a big momentum changer, gave them a short field, then they go up 28 to 6, that’s what put us in a bad spot, 6 minutes and they scored 21 points, it was just hard for us to come back from there. ” ” I give their coach staff, did an amazing job,  They figured out we weren’t able to throw the ball with our quarterback not being developed. ” With another big offensive output by the Spartans against a very good total defense, I asked Coach Wolfrum how he felt going into next week’s championship game and he said, ” Tonight, I feel good, I thought we passed the ball very well when we did, we didn’t pass alot but, two of them were touchdowns, they knocked one down, and one was dropped, and one was a big first down on a fourth down play. ” Our quarterback played very well, our run game, right from the get go, even when we weren’t able to stop them, we were able to move the ball. ”

When I spoke with Coach Wolfrum more after the game, and asked, how do you prepare for the finals against the team that defeated them in the finals a year ago, he stated that, ” there was more motivation, we started preparing for that after last year actually, we spent some time last winter, there was a couple things that we thought we just didn’t defend well and it was because of what we were doing, and we went to a clinic or two to work on, get some stuff that we could use against that stuff. ”

Up Next for the Spartans, who are once again undefeated heading into the State Finals, will square off against Central Valley, the team who defeated Wyomissing in the 2020 State Final 35 to 21. The Spartans were undefeated the previous two times they have reached the finals, winning it back in 2012 when they finished 16-0, defeating Aliquippa 17 to 14 to win what I believe is their only State Championship.

Tommy Grabowski for the TD