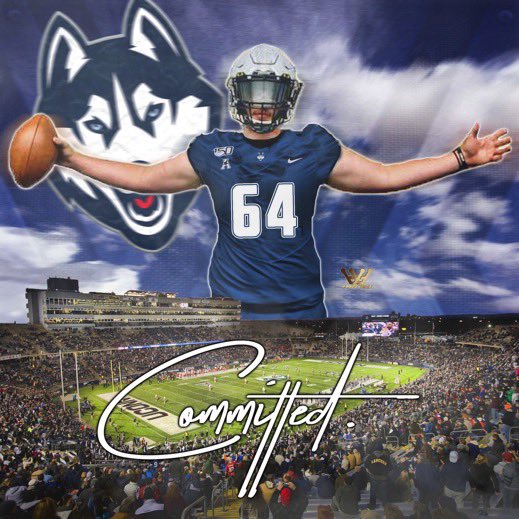 Joden Nelson has unfinished business to tend to this fall. He helped pave the way to 7-1 record for the Bearcats last fall, but he didn’t get to play in the D3 title game.  This year he doesn’t want anything to distract him from getting one game further. After visiting UConn early this month, he’d made up his mind where he wants to play college football. Joden took to twitter tonight to announce he’s seen enough, and that UConn was where he wanted to go.

His offer sheet wasn’t long, but there were some good teams in the mix. Bucknell, Bryant, Fordham, Stony Brook, Elon & Sacred Heart were among those vying for the 6-4, 280 lineman. For Nelson, the recruiting journey has been “Amazing.  I had 7 total great options and more looks from schools. It was a cool one in a life time experience. Truly was all a blessing.” That size is a bit small for an FBS team, so he will likely line up at center.

Nelson joins fellow PA recruit Nate Voorhis of Stroudsburg, who committed to the Huskies earlier this month. Nelson says he felt “at home while on campus and they continued communication daily while off campus, also saw no red flags.” It was Head Coach Randy Edsall, a graduate of Susquehannock High, who recruited Joden. Nelson felt “the time was right and there was no point to wait it out” something it seems many recruits in Pennsylvania are also leaning on.

Bearcat head coach Russ Stoner is also very proud of Joden. “He’s a tremendous young man, hard worker and his best football is ahead of him! Coach Edsell got a good one!” Nelson says Coach Edsall is getting “A hardworking, dedicated player.”  He said his parents played “A huge role, they were the ones who took me to Connecticut and the ones who sat on zoom meetings with me and went to other visits with me.”

Now that the commitment is over, what is Joden looking forward to? “The future.  Everyone knows who UConn is already but I feel like the future is scary! Being able to take in everything I’m taught and become a new man on and off the field. Football is far more than a game, you meet some of your closest friends through it as well as learn life lessons from coaches.