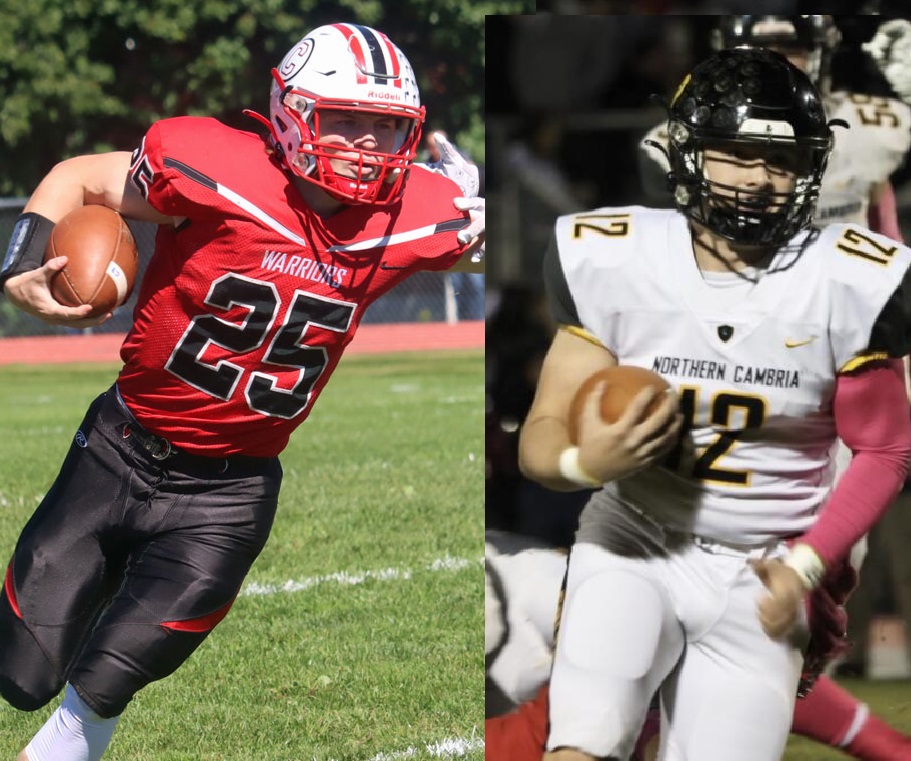 Northern Cambria Colts (10-3) are District 6 Football Champions for the first time ever, thanks to a fourth quarter comeback last week. The Canton Warriors (11-1) are two time defending champions from District 4. They meet Saturday at Mansion Park in Altoona at 5 pm in a PIAA Single A quarterfinal game.

The Colts finished third in the very tough Heritage Conference. They were seated second in the District 6 playoffs. All four seminal teams were from the Heritage Conference. They beat Penns Manor last week for the district championship revenging an early lost. They are the Cinderella team in class A. They weren’t suppose to win more than a couple of games. They were picked to finish 8th out of ten teams in the Heritage Conference. I saw them four times this year. They are 2-2 when I attend their games. I saw them three weeks in a row. They were 4-0 before losing to preseason favored Homer-Center and league winner Penns Manor. I saw both these games and they couldn’t do anything on offense. I travelled to Northern Cambria for their week seven game against West Shamokin. Some fans outside the gates were complaining about the last two weeks. I asked them one question “ If I told you before the season you would win four games, would you have been happy? “ . The answer was yes. The two games they loss they were without their starting center Brayden Peles.

The Colts have a lot of senior leaders at the skilled positions. Senior quarterback Owen Bougher leads a balanced offense which has almost as many yards rushing as passing. Bougher has over 2000 yards passing and is a threat to run. Bougher spreads the ball around. His top three receivers have over a 100 receptions and 2000 yards. Sophomore Ty Dumm had both touchdowns in last weeks win and has nine on the year. Senior Xander Dolansky is the teams big target used to move the chains. Their leading receiver is playmaker Peyton Myers who has over 1000 yards receiving and 10 touchdowns. He also has touchdowns rushing and returning interceptions, punts and kickoffs. They average over seven yards a carry on the ground. Senior Colton Paronish and Junior Jack Sheredy both have over 700 yards rushing.

They are averaging 28.5 points a game and giving up 16.5 points per game. They can score points and were only held under 20 points three times, twice during losing streak and last week.

Canton loss only once this year to a very good Jersey Shore and easily won their conference. They are coming off a playoff bye. They are averaging over 40.8 points per game while allowing only 7.8 points a game. The Warriors run the ball than run the ball and run it some more. They average only four completions per game. Quarter Austin Allen has only needed to pass for 347 yards this season. Riley Parker leads all rushers with 1290 yards, a 9.5 average and 24 touchdowns. The defense has 5 shutouts including four in a row. The defense is led by the Ward brothers Hudson and Hayden who have over 200 tackles and seven sacks combined.

Canton has to be the favored, but District 6 has a history of playoff success. The Colts will need to avoid penalties which have haunted them all year and turnovers which were a problem last week. If they can shut down the Warriors run game, which only Jersey Shore has done this year, they could pull the upset!