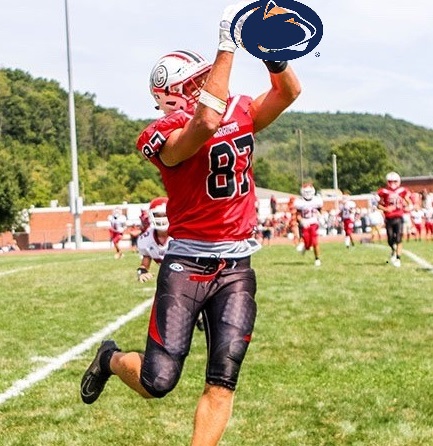 It’s been a tough year for the recruits of the Class of 21. Take Tight End Ben Knapp. The 6’5″ 220 pound senior had to deal with a covid shortened season, just four games to showcase his talents to college coaches. He did so in style, catching his 100th career pass breaking the program record, finished 2nd in history with 1616 yards and a program-record 18 touchdowns. He didn’t get any more offers, but he already had the one he wanted. On August 7 Knapp received a PWO from Penn State.  Tonight, the two-time All-State player accepted that offer and announced it on twitter:

After many conversations with my friends, family, and Coach @TylerBowen, I have decided to continue my athletic and academic career at Penn State University! Thank you to everyone for the support! #WeAre pic.twitter.com/OwqGdyCJSE

We caught up with Ben and asked him about his decision:

Ben:  I’ve played football since I was 9 years old, back when I used to be an uncoordinated offensive guard.

PFN: Why did you choose to commit to the Nittany Lions?

Ben: Not only is it a childhood dream, but Coach Bowen is a great man that I want to work with as not only a player, but a person as well.

PFN: Who was your biggest influence at PSU, who recruited you?

Ben: Coach Tyler Bowen has recruited me throughout the whole process, and has always been very honest and forthright to me. He’s a man I want to be coached by, along with Penn State’s entire staff who does a great job.

Ben: They’re getting a player who is coachable and willing to work hard to accomplish their goals.

Ben: It was a bit spotty, but I trusted the process and worked hard and ended up exactly where I wanted

Ben: It effected it in the way that I didn’t have a lot of options due to cancelled visits and things like that, but in the end I’m where I wanted to be regardless.

Ben: I was recruited as a Tight End.

Ben: They were super supportive of whatever decision I made along the way, and respected whatever choice I made. They are very happy with the decision.

PFN: What do you think is the most exciting thing about the Penn State program?

Ben: The culture and the family feel atmosphere for sure! It’s a brotherhood and I can’t wait to be apart of it!

PFN: What are you most looking forward to while playing for the Nittany lions?

Ben: Proving myself as a legitimate player to all of the people who don’t think I can make it at that level of competition.

PFN: Tell everyone out there in the PSU football world something they’d never know about you until you told them:

Ben: Something that people might not know about me in the PSU world is that I really did try to fix this tooth gap of mine, just didn’t quite work out that way.

Ben: The person who influenced me the most in terms of football would probably be my Dad. He’s always pushed me to be the best version of myself, and he’s done so much for me throughout this recruiting process.

Ben: Something I want everyone in my hometown to know is that I want to represent Canton with pride, and to show we’re more than just a small town.

« PFN Rankings are IN! Week 12, 2020!
The End Of An Era, Legendary Coach Larry Wiser Retires After Guiding Bobcats And Wildcats Football or Thirty-Two Seasons »