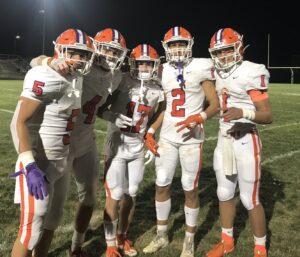 There was actual football played in central PA on Friday night, and it felt good. It also felt a bit strange, like if you ordered a chicken salad and the waitress brought you a piece of chicken with some croutons. You had the meat, and a few crunches, but the largest and loudest part of the meal was missing.  The Wildcats of Mifflinburg had their home opener in front of a smattering of parents both from the home team and Danville, but new head coach Mike Brennan’s Ironmen spoiled their evening by racking up 320 first half yards en route to an easy 49-7 win.

“We were one of the first counties to go green, so we got to put a lot of time in. There was a lot of question whether we were even going to have an opener but we got to do this and it felt good” said Brennan.

Ironman quarterback KJ Riley threw for 247 yds and 4TDs  while rushing for another.  Danville capitalized on three first half interceptions (five total in the game).  “We wanted to come down a strike quick and keep pushing from there” said Riley of the first score of the game. The Ironman defense forced a three and out, then Riley hit Carson Persing on the first play for a 35 yard td.

It wasn’t long before Danville struck again. Zach Gordon intercepted a Jacob Reese pass and returned it to the 39 of the Wildcats. A few plays later Riley hit Ian Persing for a 23 yard td pass to put the Ironmen up 14-0 at the 7:36 mark of the first quarter.

“We were in a hole, we gave them a short field. We can’t turn the ball over like that going forward” said Wildcat head caoch Jason Dressler. “We got to play on a Friday night. Tip my hat to them, they showed some good team speed and they were on point tonight.”

Another interception deep in Mifflinburg territory led to the third score of the quarter. Brady Hill made a leaping catch to give Danville the ball at the ‘Cats 21. KJ Riley found daylight around the end for a 9 yard td run.

Mifflinburg used a few nice passes to get to the Ironman 4 yard line, but the drive ended with another interception. Jagger Dressler hauled in a short pass, broke a few tackles and raced 44 yards to put Danville up 28-0 with Brady Hill’s fourth pat of the night to start the second quarter.  Danville’s defense was tough all night and forced a punt that put them at their own 7 yard line.  Riley then led his team on a 10 play, 93 yard drive capping it with a 17 yard scoring pass to Ian Persing.

KJ Riley and Jagger Dressler hooked up on right sideline for 26-yard TD pass to close out the first half with a comfortable 42-0 lead. Ty Stauffer scored on a 9 yard run in the third and Wildcats’ John Darrup got a  3-yard TD run for the Wildcats.