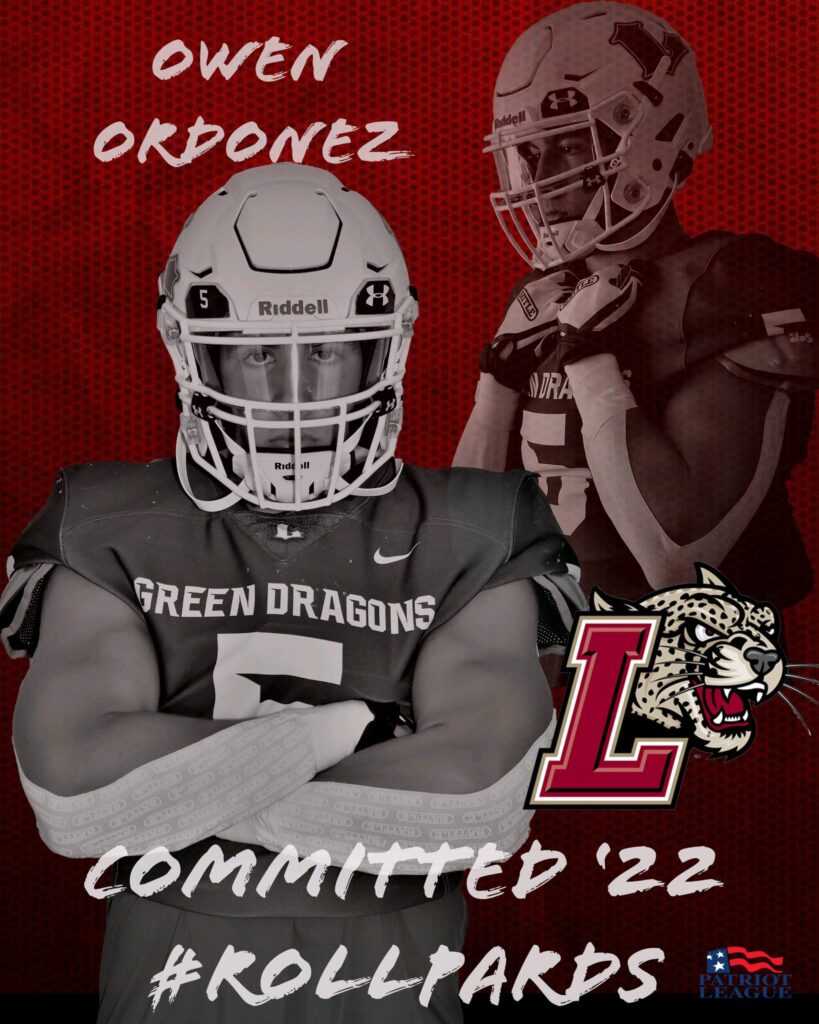 There’s a phrase thrown around the recruiting world, one that recruits don’t like to see and one that gets overused.  That phrase? Well, there’s two actually, “under-recruited” and “overlooked”.  In the case of Lewisburg Dragon’s linebacker Owen Ordonez, I prefer the phrase “strike while the iron’s hot”! Ordonez struck quickly. Following a hot July that saw the incoming senior land offers from Bucknell and the Leopards late in the month, it took just 2 weeks for the 6-3, 220 linebacker to make his choice.  He announced his commitment yesterday, and we caught up with Owen to ask him about his choice:

PFN: Why did you choose to commit to the Leopards?
Owen: It felt like the right fit. I loved the school and the atmosphere. Their facilities were fantastic. The coaches were awesome and it was a place where I could challenge myself both athletically and academically.

PFN: Who was your biggest influence there. , who recruited you?
Owen: Both the defensive coordinator, Coach McFadden, as well as the linebackers coach, Coach Hammock.

PFN: What are they getting in player like you?
Owen: An aggressive defensive player who is willing to do anything for the sake of the team. I can move to various positions and excel.

Owen: I had a lot of interest from many schools and picked up a few offers before ultimately deciding that Lafayette was the place for me.

Owen: Public Health. If not that major, then something else that would allow me to go to PA school after undergraduate.

Owen: They supported me in all of the decisions that I made. They gave me their advice and provided me with the tools to succeed. I wouldn’t be in this position without either of them.

PFN: What do you think is the most exciting thing about the program?

Owen: Being able to contribute at a Division 1 level school and work hard to hopefully win a championship.

PFN: What are you most looking forward to while playing for them?

Owen: Creating special connections and bonds with new people. I look forward to not only playing football, but also setting myself up for success in my future after college. And of course to win!

Owen: It took my recruiting a bit longer than I had anticipated, especially after having a huge junior season. Always continue to work hard and you won’t go unnoticed. Be patient and your opportunity will come eventually.

Owen: My father. He has always been an incredible coach and role model for me over the span of my career playing football. He would do anything if it meant I would succeed or be happy. He opened so many doors for me in this process and I cannot thank him enough.

Owen: I could not have done it without any of my coaches, teammates, and fans. It means the world that everyone was supportive of myself and the other players. I wouldn’t be here without them.