For Southern Columbia: The Tigers have as strong of a senior class as they have ever had which is saying something for a school with more state titles than any other in the history of Pennsylvania. The Tigers have five players that accepted offers to play Division 1 football including four at Big Ten Schools. The nation’s top recruit Julian Fleming has caught 68 receptions for 1,419 yards and 21 touchdowns. Gaige Garcia has rushed for 1,902 yards and 31 touchdowns. His younger brother Gavin has added 1,604 yards on the ground and 27 touchdowns. Preston Zachman has done a solid job as the signal-caller while also starting on defense.

On defense, the Tigers have the school’s top two all-time leaders in tackles at the inside-linebacker spots. Cal Haladay and Max Tillett have combined for 145 tackles while playing mostly in just a half of each game. Cade Linn leads the team in tackles from his safety position with 79 tackles. Jake Davis leads the team with six interceptions.

For Avonworth:  Avonworth goes as Jaxon Miller goes.  The senior running back has carried the ball 298 time for over 2,300 yards. The Lopes line is large, led by 6-4, 274 pound Josh Elm at left tackle this is a line that can open holes for Miller.  Kevin Felter at right tackle and Ryan Paszkiewicz weigh in at 310 and 285 respectively. Parker Penrod does a nice job at quarterback for Avonworth, having thrown for 2072 yards and 32 tds. His main target is Theo Newhouse with over 500 yards receiving and 9 tds.

Defensively the Antelopes are strong. Senior Jacob Horigan leads the way with over 100 tackles. As a unit this crew has racked up nearly 40 sacks this season. Drew Harper leads with 10.5 while Drew Harper checks in with 8.

Jim Roth’s offense has been unstoppable. The Tigers have been scoring however they please in 2019. Most of their scoring has come in the first half. Against the Antelopes, the Tigers will want to establish a passing game early to draw the safeties outside of the box. Then the running game will be able to take over.

The Tigers will try their best to put as much pressure on the opposing quarterback as possible. Expect a heavy dose of blitzing throughout the game. Forcing the Antelopes to keep the ball on the ground will be the goal as the Tigers are giving up less than 45 yards rushing per game.

If Coach Duke Joncours team want to have a chance they’ll have to control the ball. Long, time consuming drives that end with a score are a must. They need to keep the ball away from that dangerous, quick strike offense of Southern Columbia. No turnovers and no penalties. They’ll have to play their best game of the year.

Hang on, keep everything in front of them. The Lopes defense will need to play lights out, Julian Fleming will get away and Gaige Garcia will get his yards. They’ll need to find a way to create turnovers. The Tigers haven’t given up a sack all year and Avonworth has to find a way to end that streak. 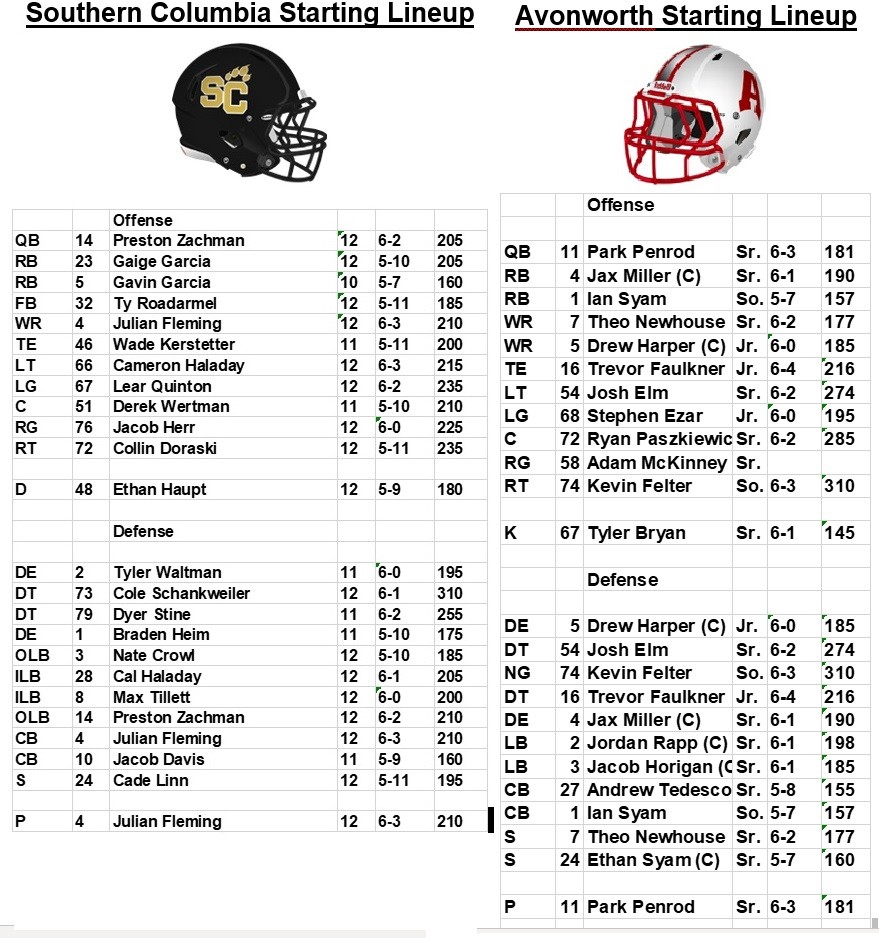 HOW THEY GOT HERE 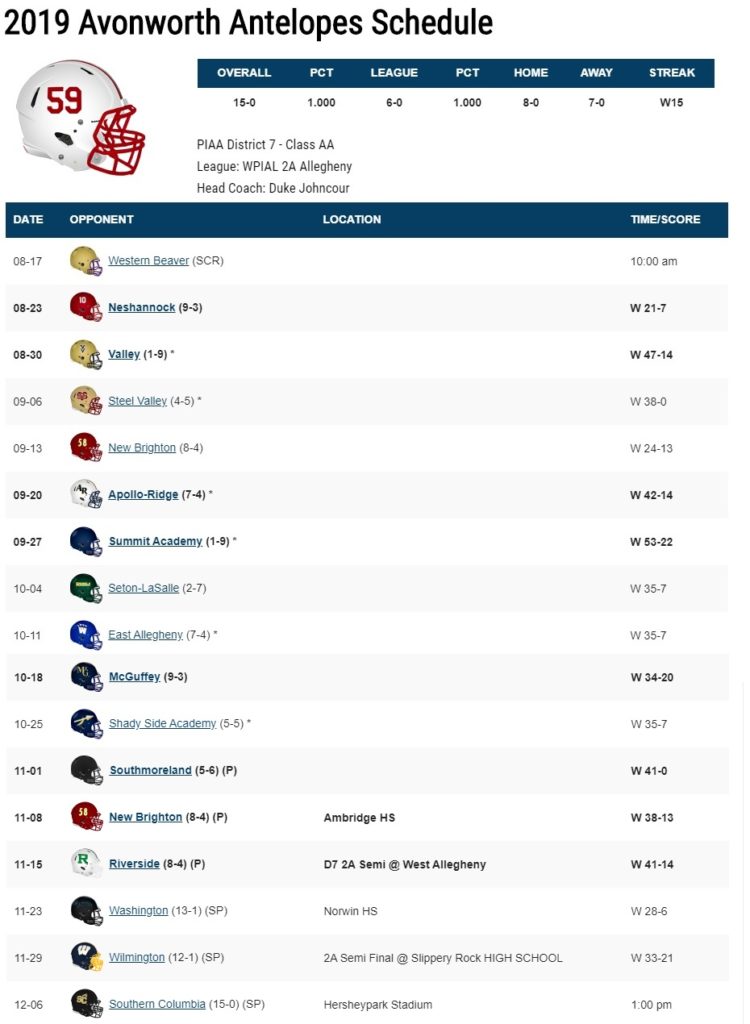 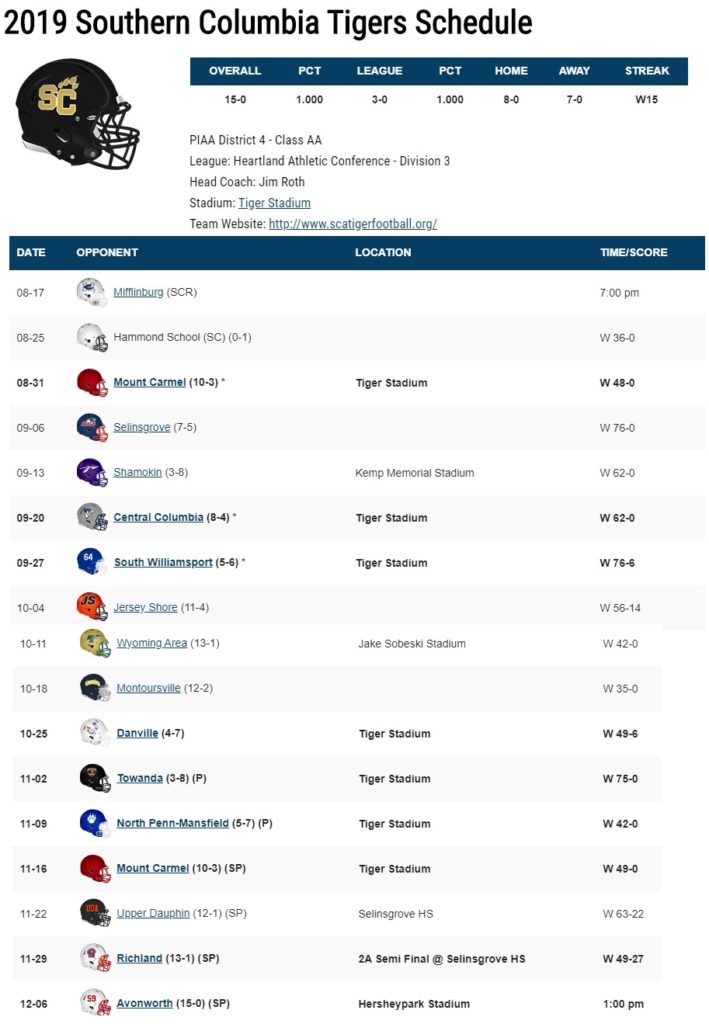