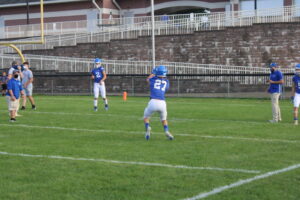 The Berlin Mountaineers played host to the Shade Panthers to open their season this past Friday night. Berlin got off to a fast start with Issac Etris scoring the first touchdown on the first possession. One of the biggest plays of the night was when Will Spochart the senior took a punt return 84 yards for the touchdown late in the first quarter. In the second after being up 21-0 Preston Foor  would get a read option and would take it all the way for a 37 yard touchdown. Preston Foor would end up getting 3 touchdowns in the first half. Berlin would score on every possession they have in the first half except for the last drive where they run out the clock for the half. The shade panthers could not get anything going on offense as they turned over the ball 3 times, 2 being an interception and one being the fumble. Overall the Mountaineers were too much to handle for the Shade Panthers as the Mountaineers would go on to win 56-0. Berlin will face Conemaugh Township next Friday as the Shade panthers will face Conemaugh Valley.