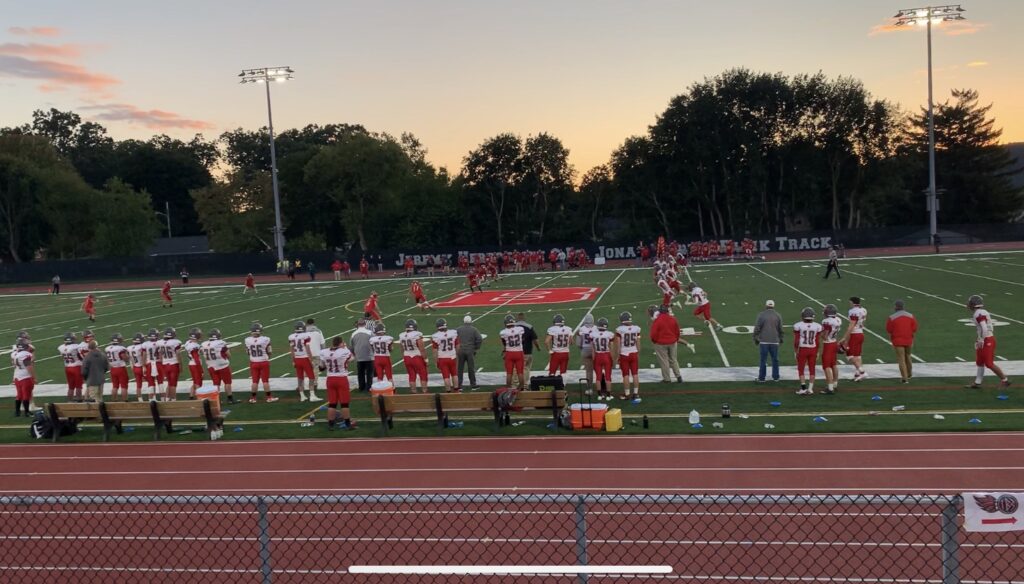 The Central Dragons and Bellefonte Red Raiders faced off Friday night with the Dragons coming out with a victory of 26-12. Leading the Dragons offense was Sophomore athlete Jeff Hoenstine, he finished with over 200 all-purpose yards and accounted for three touchdowns. To help Hoenstine the Dragons defense forced five turnovers in the game. Another key player in the Dragons victory was Junior running back Parker Gregg. Gregg finished the game with 134 rushing yards and a receiving touchdown. Also a key run late in the game to set up a 1-yard touchdown run by Hoenstine.

The Central Dragons received the opening kickoff and wasted no time to score. On their first possession, Hoenstine would find Junior receiver Josh Biesinger from 34 yards out with an acrobatic catch by Biesinger. The point-after attempt snap was fumbled making the score 6-0 Dragons with 8:55 to go in the first quarter. The Dragons would not lose the lead the rest of the night. Bellefonte and Central would both have a defensive battle for the rest of the first quarter and most of the second quarter as well. Both teams couldn’t find a groove. Late in the second quarter, Bellefonte was driving down the field after a failed Dragon possession. At the 20 yard line on second and five the Red Raiders handed the ball off and Senior running back Ryan Fitzgerald coughed up the ball for the first Red Raider turnover of the night. The Dragons couldn’t score off of the turnover and were forced to punt. The punt was clean and the returner for the Red Raiders fumbled the ball giving the Dragons the ball at the 40-yard line. A few plays later from the 28-yard line on fourth and 15, Hoenstine found Gregg wide open in the endzone for the touchdown. The two-point conversion attempt was no good making the score 12-0 Central with 55 seconds to go in the half. Bellefonte was quick to respond to the Dragons score. The Red Raiders went all the way down the field and with 21 seconds to go in the half Raiders quarterback Ethan Rossman took the ball from 2 yards out for the touchdown. The point-after attempt was good making the halftime score 12-7 Dragons.

To start the second half Bellefonte received the ball and was forced to punt on their opening possession. Central got the ball on their 26-yard line and drove down the field capping off the drive with a Hoenstine touchdown pass from 19 yards out to Junior receiver Devon Boyles. The two-point conversion was good making the score 20-7 Dragons with 7:37 to go in the third quarter. The following Red Raider possession ended in the third turnover of the night when Hoenstine intercepted Rossman at the 46-yard line. The Dragons weren’t able to move the ball and were forced to punt. The following possession Rossman found Senior receiver Dylan Dann for a huge 60-yard touchdown. The kick was good making the score 20-14 with 4:12 to go in the third quarter. Early in the fourth quarter, the Red Raiders found themselves driving down the field but around the 37 yards line for the fourth time the Red Raiders would cough up the ball. The Dragons wouldn’t waste time scoring and on first and ten from the 25 Gregg would break away from the Red Raiders defense and scramble down to the one-yard line. The very next play Hoenstine would sneak in for the Dragons touchdown. This made the score 26-14 Dragons with 6:15 to go in the fourth quarter. The game would end when Rossman threw an interception with about a minute to play in the fourth quarter for the fifth turnover of the night. The Central Dragons advance to 2-0 on the season and will travel to face Philipsburg- Osceola next Friday. The Red Raiders drop to 0-2 on the year and will travel to Clearfield next Friday.