The Marauders and Rams moved their game up one day to avoid the rain from Hurricane Nicole. So instead of contending with the rain, both teams had to deal with a 20 + mph wind. It seriously limited both teams passing games and BG was able to walk away with a big road victory 32-22. The Rams will not win a fifth straight D6 2A title, but the Marauders will play for one in their first season in 2A.

The great thing about watching a BG-Richland game is you know it’s going to be entertaining and well coached. Rams Coach Brandon Bailey and Marauders Coach Justin Wheeler are proven winners, who will bring a few tricks to the party and their teams are well disciplined. Coach Wheeler before the game gave a fiery speech to his team, telling them it would take all 40 players to win the game. It helped that one of his forty is returning single A player of the year Karson Kiesewetter. The Marauders got the ball first moving into the wind. They converted three straight third downs before being stopped on a fourth and six from the Richland 28. The snap was fumbled and the play never developed. The Marauders who rotate their place kickers would probably have tried a field goal if not for the wind. Sam Penna and Evan McCracken than led the Rams right down the field. The drive covered 67 yards in less than three minutes and was helped by two Marauders offsides penalties in the red zone. McCracken scored the touchdown from four yards and was able to get the two point conversion also when he broke a tackle at the goal line. The Rams had their only lead of the night at 8-0.

The Marauders would muff the kickoff and be penned up at their own 12. Three plays later BG punted into the wind. This turned out to be the first of three straight Rams drives where the Marauders would not allow them a first down. On fourth and six from the BG 38, Penna’s out pass was broken up by Hamilton Gates. This turned out to be a really big play as BG gained 26 yards in field position and the wind as the second quarter started.

The Marauders would go 62 yards in three minutes as Karson Kiesewetter was carried into the end zone by his entire offensive line. A trick play on the two pointer tied the game at 8-8. The Rams went three and out and punted. The Marauders in good field position would go 51 yards in four minutes to take the lead. Again it was Kiesewetter scoring, this time from five yards out. The kick was good and BG led by seven. The Rams would again go three and out and punt. The Marauders starting at the Rams 43 continued to pound the rock. Kiesewetter hit Cooper Rother for a big first down. BG would get to the Rams 25 before being stopped on fourth and two with just 18 seconds to go in the half. Both teams headed to the locker room knowing they would have to play better to get back to the D6 championship game.

The Rams got the ball first moving into the wind and knew they had to maintain possession to keep the Marauders from using it to expand their lead. They managed just one first down and punted again. The Marauders starting near midfield would use just three minutes to move into field goal range. Gonzalo Brieva, a spanish student would kick a 40 yard field goal to give the Marauders a two score lead. Thirty seconds later the first turnover of the game occurred. The fumbled happen along the Rams sideline, Coach Bailey was visibility upset. It was a question of whether the player recovering the fumble was in bounds or out of bounds. It was bang-bang. I thought it was a good call by the official. Three plays later the Marauders had a three score lead as Kiesewetter hit Drew Abraham on a screen pass and he easily waltzed into the end zone. The Rams were running out of time. Penna than led the Rams on a 77 yard scoring drive. Richland spread out the Marauders and Penna would find a hole and run through it. As they moved into BG territory for the first time in the half, Penna hit Austin Yarnick on a short pass and he was able to get to the right sideline and out run all Marauders for a 42 yard touchdown. The score was now 25-15 BG but the Rams would be getting the wind in less than a minute.

One play later the game was stopped for an injury to Richland’s Joe Penna. Their was a 20 minute delay as he was taken from the field on a stretcher, he is the younger brother of quarterback Sam. My prayers are with him and his family. I see a lot of football every year and have been fortunate not to see any major injuries.

Going to the fourth quarter, BG knew they needed to play keep away and they would be heading to the championship. Richland knew they needed to make a stop. The Marauders offensive line won the battle. BG took seven minutes off the clock driving deep into Rams territory. Kiesewetter made play after play escaping at the last moment. On fourth and ten from the Richland 30, he tried to make another play and was intercepted by Ethan Box. Box outraced everyone for a 70 yard pick six. The scoreboard showed 25-22 with 4:59 to go.

Kiesewetter is a special player and instead of getting down, he took the Marauders on his shoulders to the championship. After returning the kickoff himself to the 30, he led a 70 yard scoring drive. Kiesewetter would throw an incomplete jump pass after running the ball himself five straight times. On the next play, a third and nine, he somehow avoided several Rams and raced 41 yards for the final score. The Rams down 10, had only a minute and 45 seconds left. They used the entire clock before fittingly Kiesewetter intercepted the pass on the games final play. Final BG32 Richland 22

D6 2A Championship in Altoona Penns Valley vs Bishop Guilfoyle 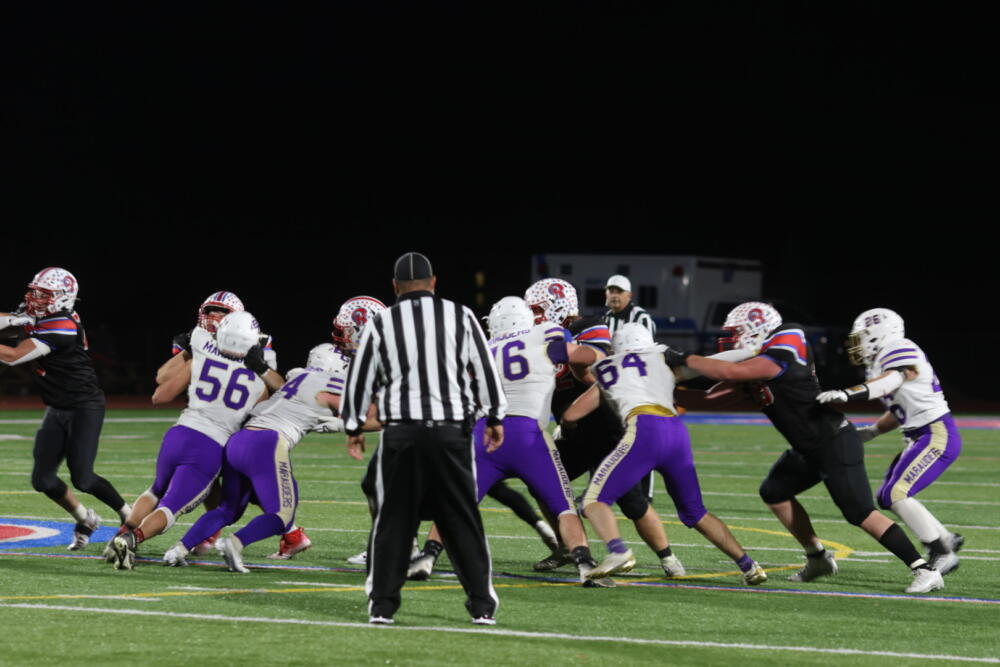 BG won at the line! 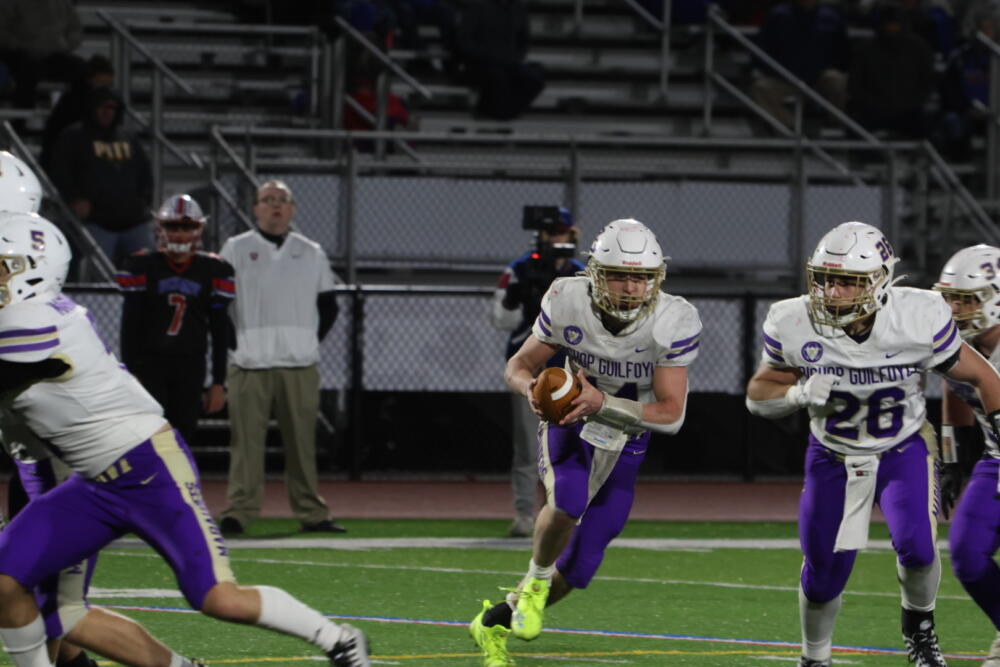 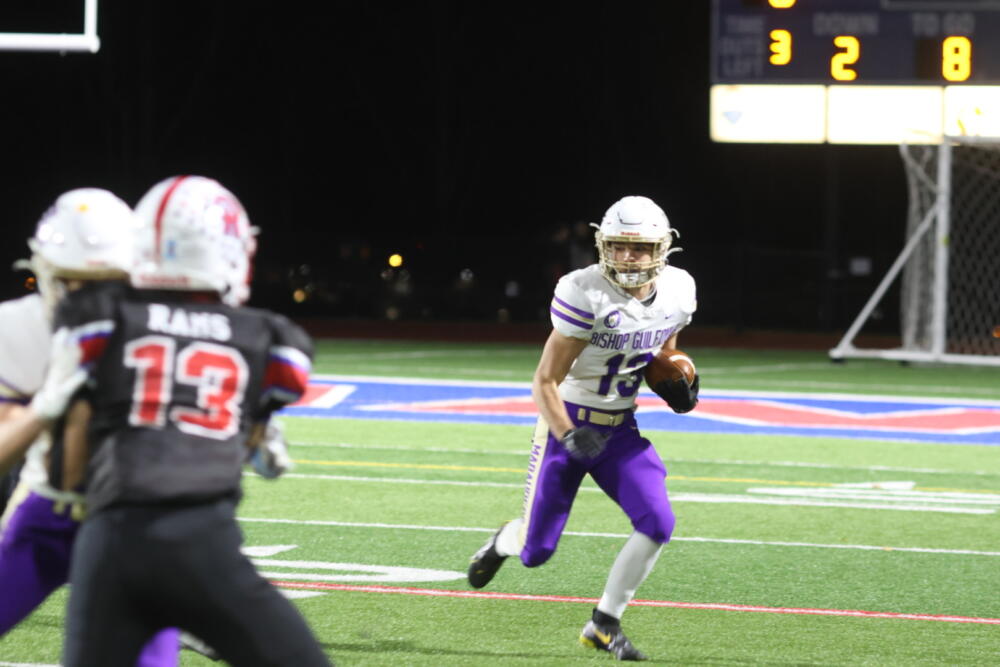 Cooper Rother played a part in the passing game! 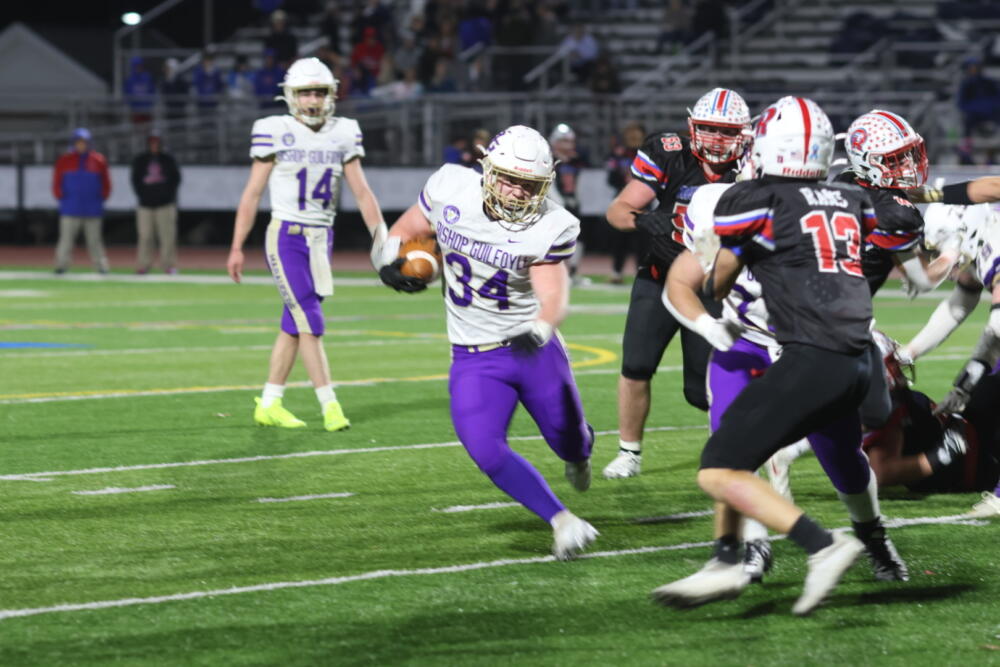 Kaden Wyandt had a big night- 2 sacks and ran hard! 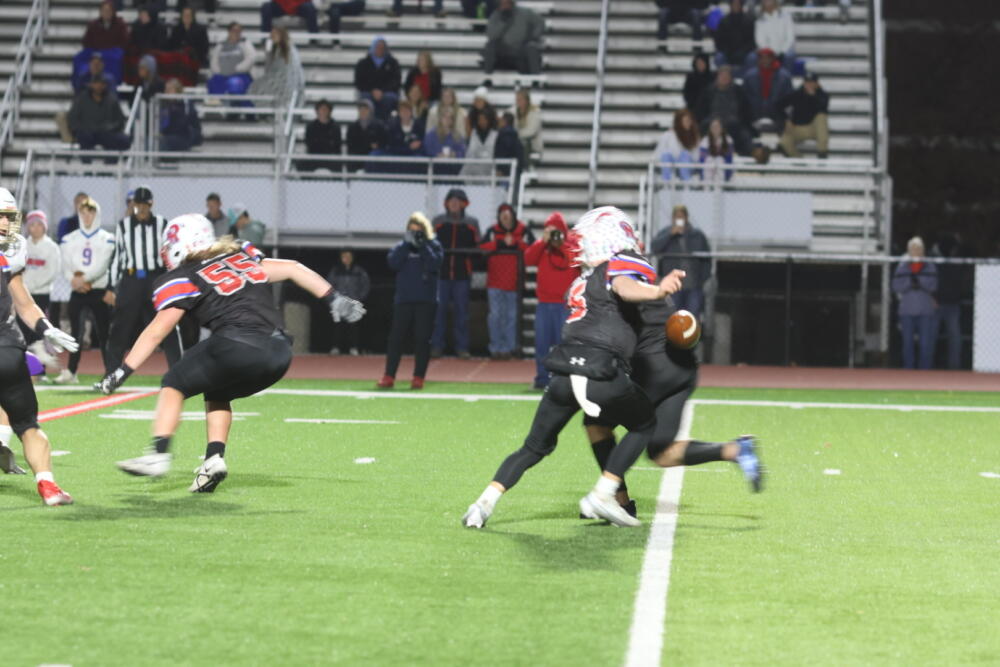 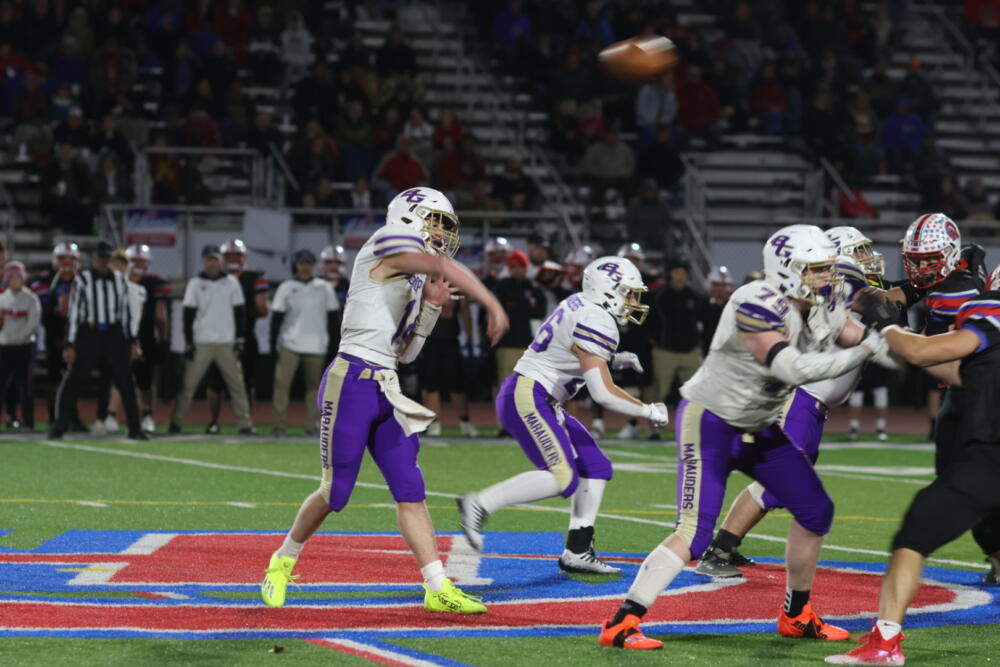 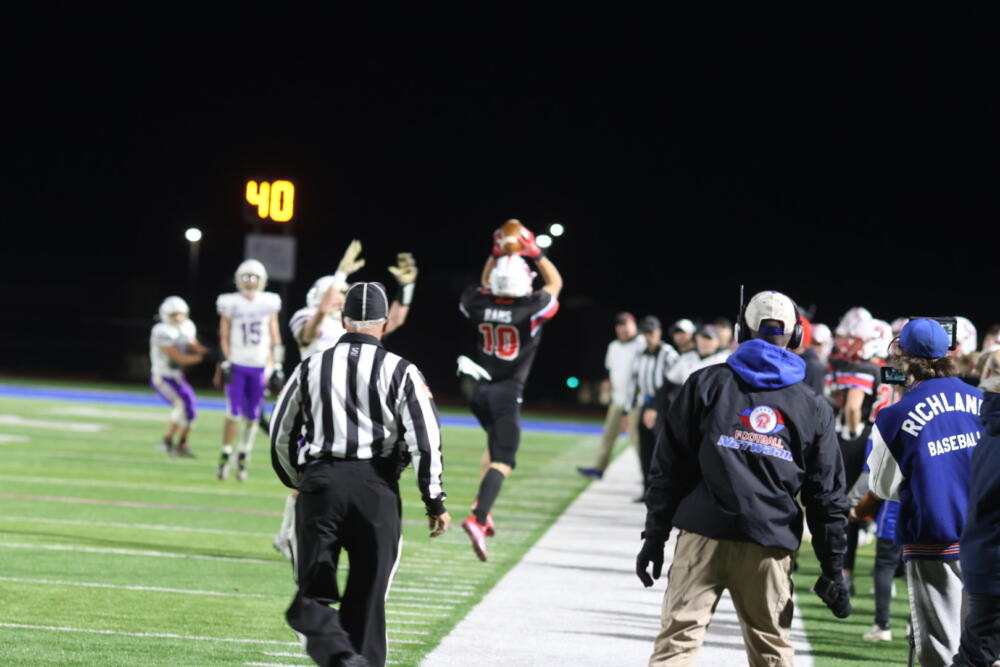 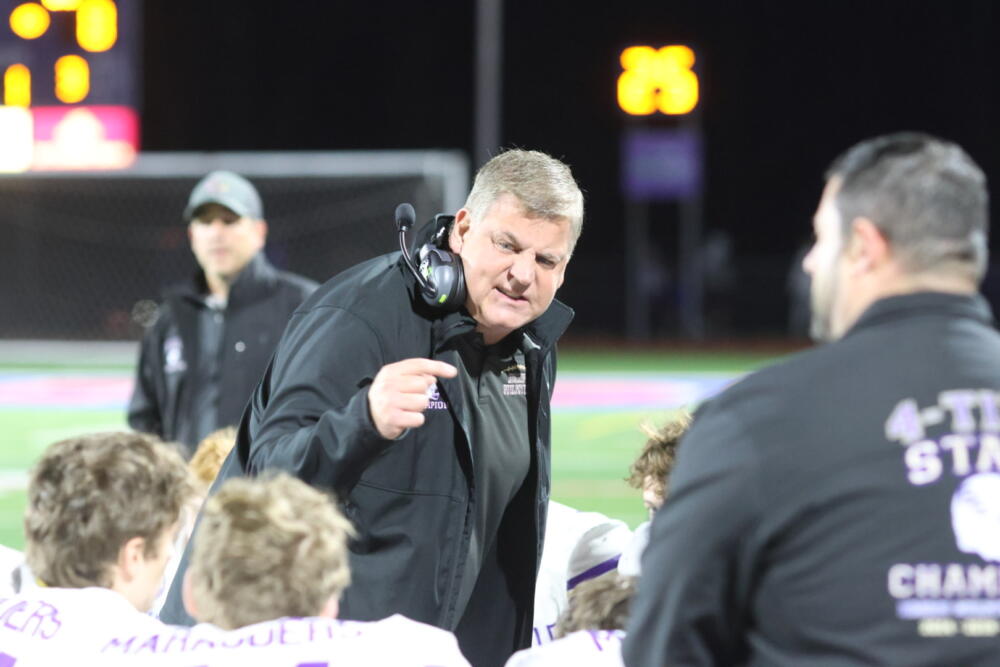 Coach Wheeler had his troops ready! 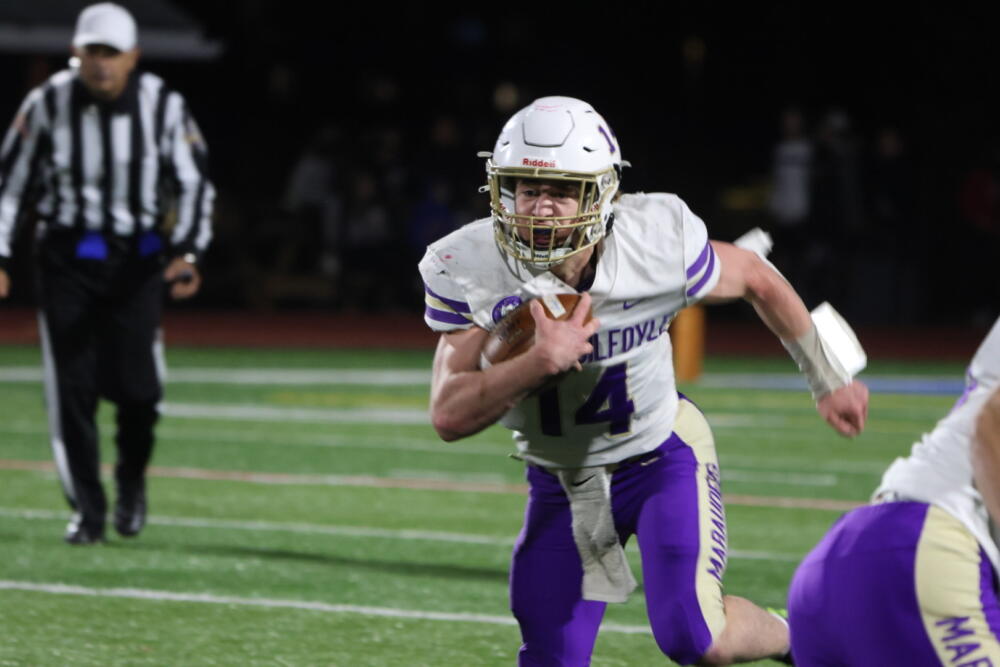