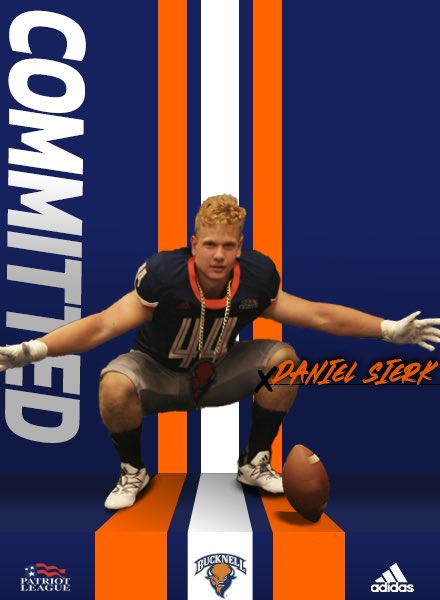 Hempfield Area lineman Daniel Sierk didn’t have a long list of schools that offered him, but the ones who did have very respectable programs and the Universities themselves have a high academic standard, and with a 4.5 gpa, Sierk easily qualified. The University of Pennsylvania, Lafayette College and Bucknell threw their hats in the ring, but it was Bucknell’s hat found it’s way to the head of Daniel’s choices.  This week the 6-4, 250 pound lineman for the Spartans announced that he’d be attending Bucknell after graduation.

We caught up with Daniel to ask him about his decision:

PFN: Why did you choose to commit to the Bison
Daniel: I felt Bucknell was the best overall fit for me. I loved the campus and coaching staff, and you can’t beat their academics.
PFN: Who was your biggest influence there. , who recruited you?
Daniel: Coach Kevin Bracken handled my recruiting.
PFN: What are they getting in player like you?
Daniel: An extremely hard-working and dedicated defensive lineman.
PFN: What was the recruiting process like for you?
Daniel: It was definitely frustrating at the beginning, trying to gain interest. However I really enjoyed getting to visit different colleges and meet a lot of great coaches.
PFN: What position were you recruited for?
Daniel: Defensive Line
PFN: Do you know what you’d like to study?
Daniel: Mechanical Engineering
PFN: What role did your parents play in your decision?
Daniel: My parents were very supportive. They loved Bucknell as well, but would have been happy with any decision I made.
PFN: What do you think is the most exciting thing about the program?
Daniel: has a relatively new coaching staff, and I think they are very dedicated to improving the program.
PFN: What are you most looking forward to while playing for them?
Daniel: I am excited to play with a lot of players who are extremely serious about both football and academics.
PFN: Tell everyone out there in the football world something they’d never know about you until you told them:
Daniel: I am a Lord of the Rings fan.
PFN: Who is the person who most influenced you in your football career?
Daniel: My former head coach Rich Bowen.