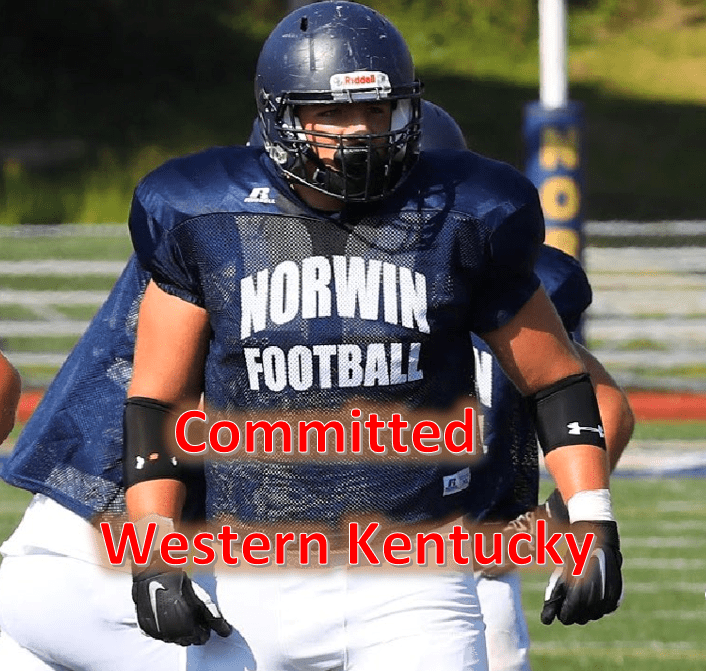 He had plenty of hi profile offers, but today Norwing offensive guard Anthony Giansante chose to commit to a team that had one of the best offensive lines in the FBS last year. The 6-4, 280 pound lineman chose Western Kentucky over the like of Dartmouth, Fordham, Brown and more.  He made his decision known today on twitter:

We caught up with Anthony to find out what we could about his decision:

AG: Since the 7th grade.

PFN: Why did you choose to commit to the Hilltoppers?

AG: WKU is where I felt I would learn and develop the most as an offensive lineman. OLine Coach Mike Goff is a 12-year NFL veteran and pro bowler who has the experience and knowledge I want to tap into. I think learning from him will provide the best opportunity for me to achieve my goal of playing professionally someday.

AG: It was my plan to make a college commitment before my senior season. Recruiting can be very time consuming and distracting, and I want to focus on my team and preparing for our season. And based on the tremendous opportunities I had to choose from, it confirmed there was no reason to wait.

PFN: Who was your biggest influence at Western Kentucky, who recruited you?

AG: Oline Coach Mike Goff is who recruited me. I really appreciated his early confidence in my ability to contribute to WKU’s Oline, which was one of the highest ranked units in the FBS last year. With him, there wasn’t much of a recruiting process. He liked what he saw on film and called me with an offer. He has been very accessible and courteous to me and my family, and very easy to communicate with. Within two hours of texting him, I would receive a text back or call. What might seem insignificant to others is often what makes an impression on me.

AG: Someone who likes to learn and work hard. I enjoy the process of getting better as much as playing the game.

AG: I am not a five-star recruit, nor do I come from a prep school program with a lot of connections, so I had to take ownership to the recruitment process and reach out to coaches. Along the way, I got to learn a lot about the process, and get to know some really good people.

AG: I planned on visiting schools I had offers from, then making my decision before the start of my senior season. When I learned the dead period had been extended through August, I wanted to make my decision based on the information I had.

AG: My family and I talked a lot about it, prayed about it, evaluated on paper the pros and cons of each school that provided me a college football opportunity. They really wanted me to think it through. It’s very difficult to pass up an Ivy League education and its lifelong benefits, or the opportunity to get a free education and play ball near a beach. My parents told me ultimately it would be me doing all of the hard work, and they would support me in whatever I decided.

PFN: What do you think is the most exciting thing about the WKU program?

AG: The momentum the program has right now. Head Coach Tyson Helton was last season’s C-USA Coach of the Year, and has done a tremendous job. He turned the program around in one year, including crushing Arkansas in the regular season and beating Western Michigan in the SERVPRO First Responder Bowl.

PFN: What are you most looking forward to while playing for the Hilltoppers?

AG: Being around other linemen who are as motivated as I am to learn, work hard and win games. Also, I look forward to the all-day dining that is available at the residence hall I will be living in. 🙂

PFN: Tell everyone out there in the Hilloppers football world something they’d never know about you until you told them:

AG: I am 140 pounds heavier than my twin brother.

AG: My dad. He and his family were all skill players, so he really took the time to learn about the offensive line position, and brought in family friend and former Pitt O-lineman Tony Delazio to teach us both.

AG: I am not a hype type of guy, so they probably don’t realize how proud I am to be their teammate and represent Norwin Football. In my profile pics and posts I am usually wearing a jersey or shirt that spells out Norwin Football. It’s intentional.