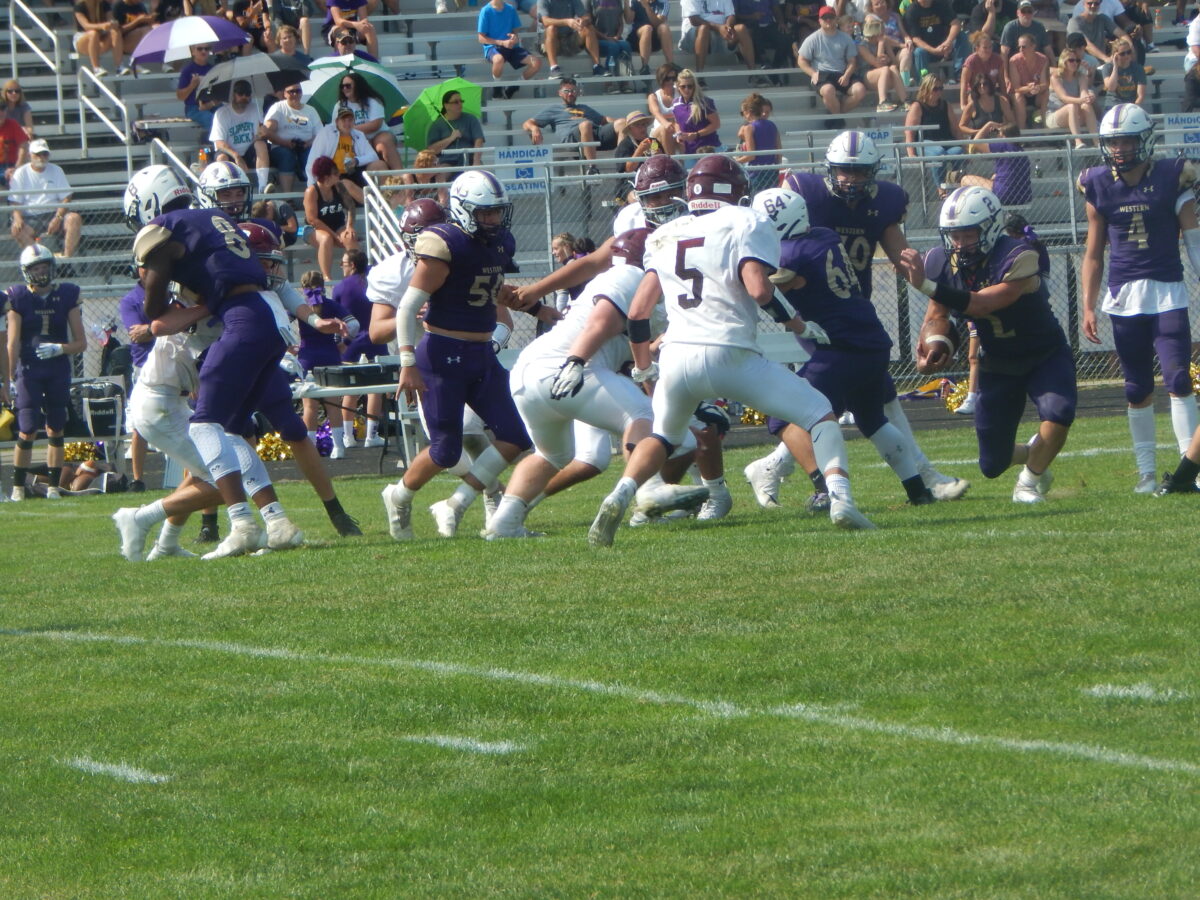 Industry: Western Beaver opened up a 20-7 halftime lead, then held off Beaver for a 20-14 win Saturday afternoon.

“We got better today after some of the mistakes we had made in previous games,” said Western Beaver head coach Ron Busby. “We continue not to blame each other and pick each other up when we make a mistake. We’re a resilient football team with great leadership. That is why we pulled this game out today.”

Ringer led the Bobcats with 69 yards rushing while also passing for 95 yards with two interceptions.

Western Beaver responded as their quarterback, Xander LeFebvrre, scored from four yards out.

LeFebvre then blocked a punt that Lonnie Craft scooped up for a 15-yard return that pushed the lead 20-7 with 5:03 to play in the first half.

Beaver clawed their way back into the game when Josh King intercepted a LeFebvre pass and returned it 90 yards for a touchdown with four minutes to play in the third quarter.

“This is a group that over the last couple of seasons, we have not had a lot of success,” said Beaver head coach Cort Rowe. “We’re still learning those winning habits. It’s a process. Today we missed some little things.”

The Bobcats had two chances in the fourth quarter to potentially win the game.

The first came when Liam Gibson intercepted LeFebvre with 2:21 to play at the Beaver 31-yard line.

On the next play, LeFebvre returned the favor and intercepted Ringer.

“We have to do a better job in the passing game. I’m not talking about just our quarterback,” said Busby. “From our offensive line to receivers. That interception Xander had was the turning point in the football game. He threw a couple of balls I know he’d like to have back. But when the game is on the line, I’m going number four every time.”

Beaver got one final chance with 31 seconds to play at its 9-yard line.

The Bobcats were able to move the ball to their 31-yard line before time expired.

“I love my kids’ fight, and I love their effort,” concluded Rowse. “We will get better from this. This was a learning experience. My hats off to Western Beaver. Their staff did a great job, and they had a great game plan.”

The Bobcats were held to 49 yards of offense in the second half.

“We’ve been good on defense all year,” said Busby. “Our defensive staff has done a great job on year, and they had another masterpiece today.”

Beaver will attempt to rebound next week when they play host Seton LaSalle.

“I like these kids and our mentality,” said Rowse. “Our kids will understand that we will get better from this.”

Western Beaver will go for its fourth win in a row when it travels to Summit Academy next Saturday.

“Hopefully, next week, we learn how to travel,” said Busby. “We have six home games this year, so we want to make sure we’re ready to go down there and play a great game.”