Last night in Brookville, the Blue Raiders gave the Gremlins what Patty gave the drum, a good beating.  Hitting on all cylinders offensively and deploying a punishing defense, Brookville scored a 44-0 victory over the previously unbeaten visitors.  “This is probably the best all-around game we’ve played in the last couple years,” stated an elated Raider head coach, Scott Park.

Offensively, the Blue Raiders were led by their phenomenal quarterback, Jack Krug who completed 26 of 36 passes for 272 yards and four touchdowns.  He also rushed for a score.  “He’s good.  He reads well.  He has a lot of confidence in himself.  He runs well.  And he’s a leader.  The receivers believe in him,” commented Park when asked about Krug’s performance.  His receivers obviously love him because he spreads the ball around so well.  On the other hand, because he can spread the ball around so adeptly, defenses hate him.

Five Brookville receivers had at least three catches.  Leading the way was Brayden Kunselman with 8 snares for 97 yards and 2 touchdowns.  One of those snares was from a pass pitched by Krug’s younger brother, Charlie.  Robert Keth hauled in seven passes for 85 yards and a TD, while Kyle MacBeth snagged 5 passes for 47 yards and a touchdown.  MacBeth added a 45-yard rushing touchdown too.  Also, Ryan Daisley and Braiden Davis caught four and three balls respectively.

The Blue Raiders intercepted six Gremlin passes on the evening, with Robert Keth returning one 42 yards for a touchdown.  MacBeth had two picks, as did lineman Nathan Taylor.  John Colgan had the sixth interception.  The penurious Brookville ‘D’ yielded a paltry 73 yards for the entire game.  “We knew going in, their strength is running and our strength on defense is the middle.  So, it was their best against our best,” said Coach Park.  In addition to the six interceptions, Park’s team registered 5 sacks, and limited Karns City quarterbacks to 3 completions in 19 attempts.

Brookville led 6-0 after the first quarter, 25-0 at halftime, and 44-0 following the third quarter.  Park had this to say about the outcome, “I am surprised.  I thought we’d come out and beat them.  I didn’t think it would be like this.  We matched Karns City’s toughness which is what we were worried about.  I was a little concerned, but they stepped up.”

Brookville outgained Karns City for the game 388 to 73 and had a yardage advantage at the intermission of 262 to 29.  At one point from the second quarter through most of the third, the Raiders scored on five straight possessions.  Krug is now third on the career TD pass list in District 9 with 89.  He is also sixth on the career yardage list in D-9 with a little over 6,900 yards. 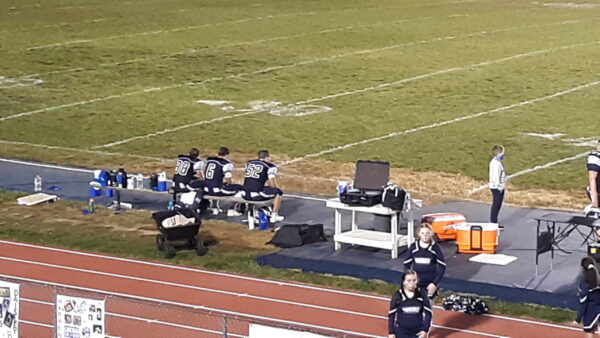 Next week the Blue Raiders, who are now 3-0, travel to Moniteau.  Karns City, with their 2-1 record, is on the road again, this time heading to Punxsutawney to tackle the Chucks.