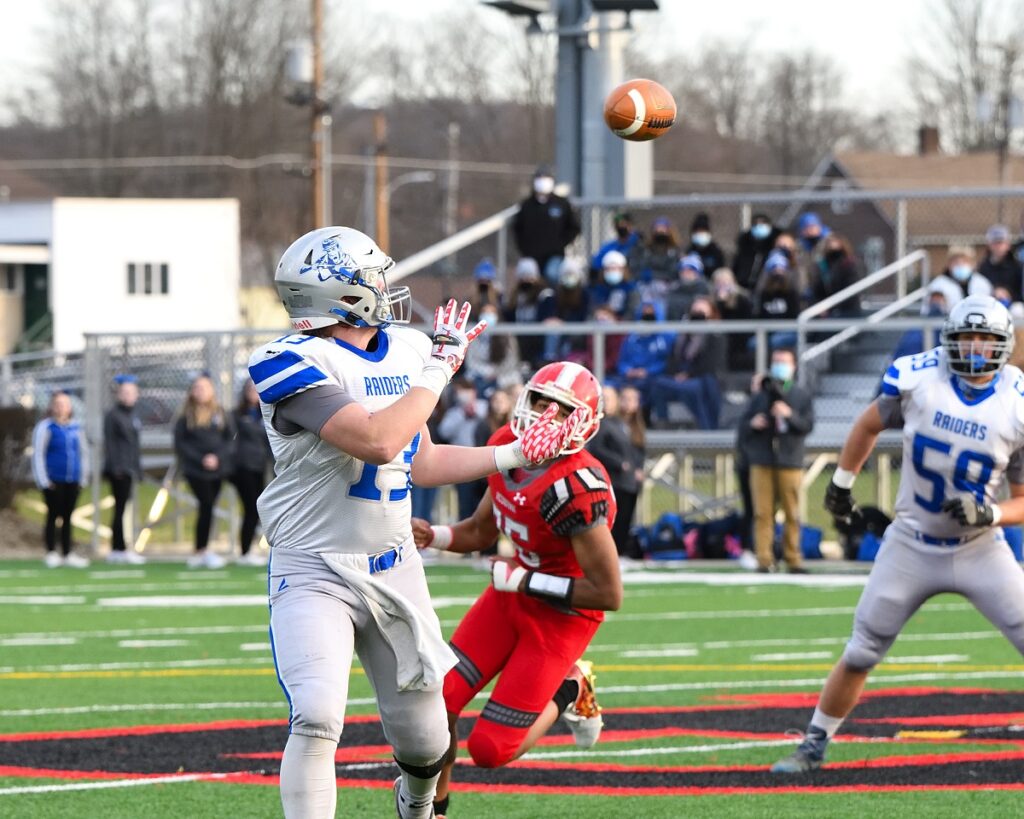 The Reynolds Raiders are known state-wide for their phenomenal wrestling program, yet it’s the Raider football team that is currently riding the wave of success.  They defeated the Redbank Valley Bulldogs 19-14 in Brockway Saturday afternoon to move on to the Class A western finals next week.

“This is huge.  There’s a ton of wrestlers on this football team.  Coach Taylor is one of my biggest supporters.  I can’t thank him enough.  It’s all about these kids though.  They bought into what we’re feeding them and they’re doing a wonderful job executing,” stated an elated Reynolds head coach Josh Mull.

Using the running game to play smash mouth football and sprinkling in just enough passes including one for a touchdown, the Raiders controlled much of the game eating up lots of time on the clock.  Defensively, Reynolds completely shut down Redbank’s ground game and intercepted a couple of passes when they forced the Bulldogs to throw more than they wanted to.

After a scoreless first quarter that found Redbank running a total of 4 plays, Reynolds found the end zone at the 10:45 mark of the second stanza when 6’2” 225-pound Aiden Mull bulled in from the four to cap a 13-play 75-yard drive.  The extra point try hit the upright and Reynolds led 6-0.

That lead lasted 1 minute and 45 seconds as Reynolds scored again on a beautiful 43-yard TD pass from Brayden McCloskey to Mull who found an opening in the secondary and raced the rest of the way to pay dirt.  Aiden Mull described the play like this, “It was a third and long situation.  I don’t think we showed it this year.  I actually changed my route to get where there was open field and Brayden threw an amazing ball.”  The 34-yard drive was set up when Gavin Alabran recovered the pooched kickoff at the Redbank 34.  Dreyvin Livingston’s PAT put Reynolds up 13-0 at that point.

Finally, getting the ball for only the second time in the game, the Bulldogs covered 67 yards in 9 plays to draw to within 6 points.  The two big plays were Cam Wagner’s two completions to Chris Marshall.  The first covered 23 yards to give Redbank a first down in Reynolds territory and the second was an 18-yard strike for the touchdown at the 4:23 mark before halftime.

The half ended when Reynolds turned the ball over on downs at Redbank’s 42 and the Bulldogs subsequently threw 2 passes losing a net of three yards.  For the opening two quarters RBV had the ball for only 7 minutes and 29 seconds, running 15 plays for a total of 91 yards.

A golden opportunity was given to Redbank as they began their drive at the Raider 41.  On third down Clayton Rhoades came up with a big interception to halt the Bulldog momentum.  Redbank’s head coach Blane Gold stated, “We thought we would come out in the second half and take the lead, but turnovers killed us.”  The balance of the third quarter found both teams entering the other’s territory but Reynolds turned the ball over on downs and Redbank punted to pin the Raiders deep at their 13.

As a result of that punt, RBV’s defense forced Reynolds into their only three and out of the night.  Beginning their possession at the Raider 46, the Bulldogs got one first down, but then were forced to punt again.

Starting at their twenty and helped by two unsportsmanlike penalties, the Raiders drove 80 yards to go on top 19-7 with just under 7 minutes to play.  Cole Toy was the workhorse with 7 carries for 50 yards including the last 2 for the score to give his team a little breathing room.

Redbank answered by going 55 yards and pulling within one touchdown of taking the lead.  Wagner hit on four of seven passes, including the twelve-yard TD toss on fourth down to Trenten Rupp in leading his team to the score with 5:11 left in the contest.

Wagner to Rupp. RBV back in it. 19-14 Reynolds. Just over 5 minutes remaining. @PaFootballNews @RVBulldogs @FootballVenango pic.twitter.com/lC6vVuFgem

Trailing 19-14, it was up to the Bulldog defense to get the ball back.  But the Raiders’ big line and constant pounding by the 200-pound Toy had taken its toll. The Valley defense appeared to be running on empty and as a result, Reynolds maintained the ball and traversed slowly but surely down the field and inside the Redbank 10 before taking a knee on the game’s last play.

Coach Mull’s thoughts included, “That’s a good football team over there.  That’s a good defense.  We knew it would be a drag out fight.  We had to do some things we’re not used to doing.  We just happened to execute.  I can’t be happier for my kids.”  In talking about his defense Coach Mull said, “We felt if we read our keys and did the right thing, it would put us in position to make plays”

Ray Schreckengost had all 66 of Redbank’s yards on the ground.  Wagner ended up throwing for 95 yards and 2 touchdowns, but also had 2 interceptions in going 13 for 22.  Marshall was the Bulldog’s top receiver with 4 grabs for 52 yards and a score.  Reynolds limited Redbank to a grand total of 161 yards for the entire game, while collecting 309 yards against what had been a very stingy Bulldog ‘D’.

Coach Gold offered up these thoughts, “We fought the best we could.  They are very good at what they do.  They’re big up front, but they didn’t do anything we weren’t expecting.  The one rep we wish we could have back was the touchdown pass.  Technique wise we played it right.  They just called a really good play.”

Reynolds moves to 9-0 and faces a very good Jeannette Jayhawk team out of District 7 next week.  Redbank finishes the 2020 campaign with a 7-1 mark. 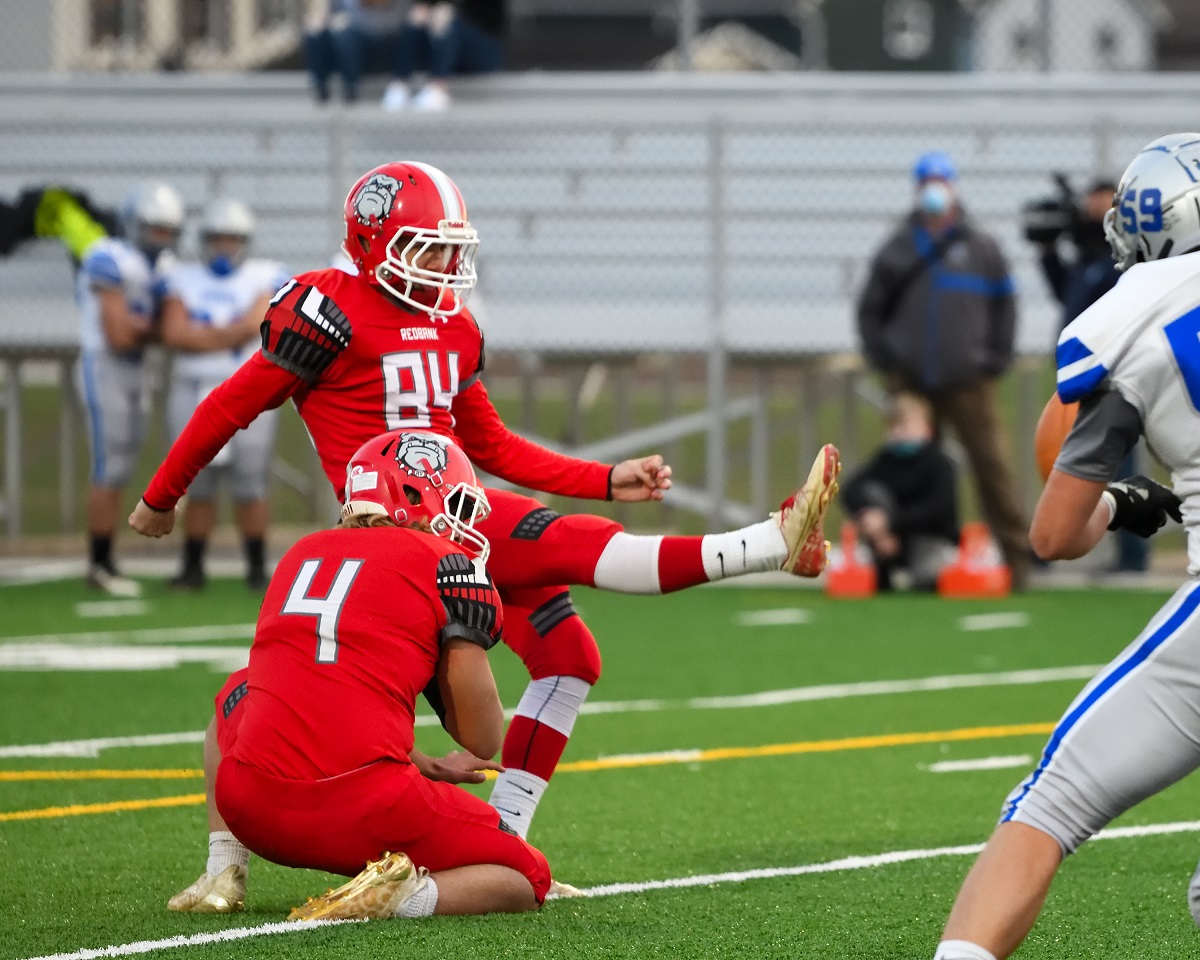 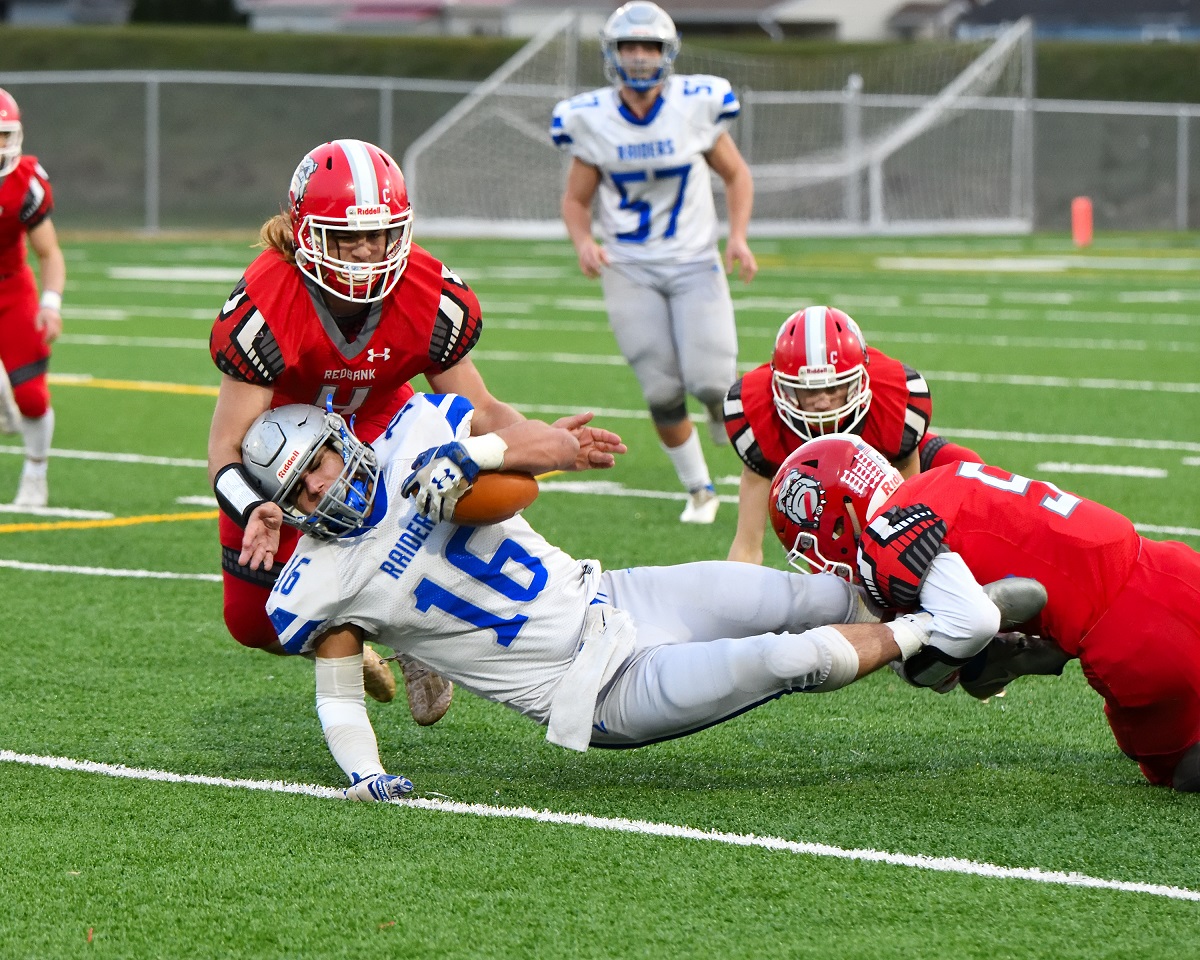 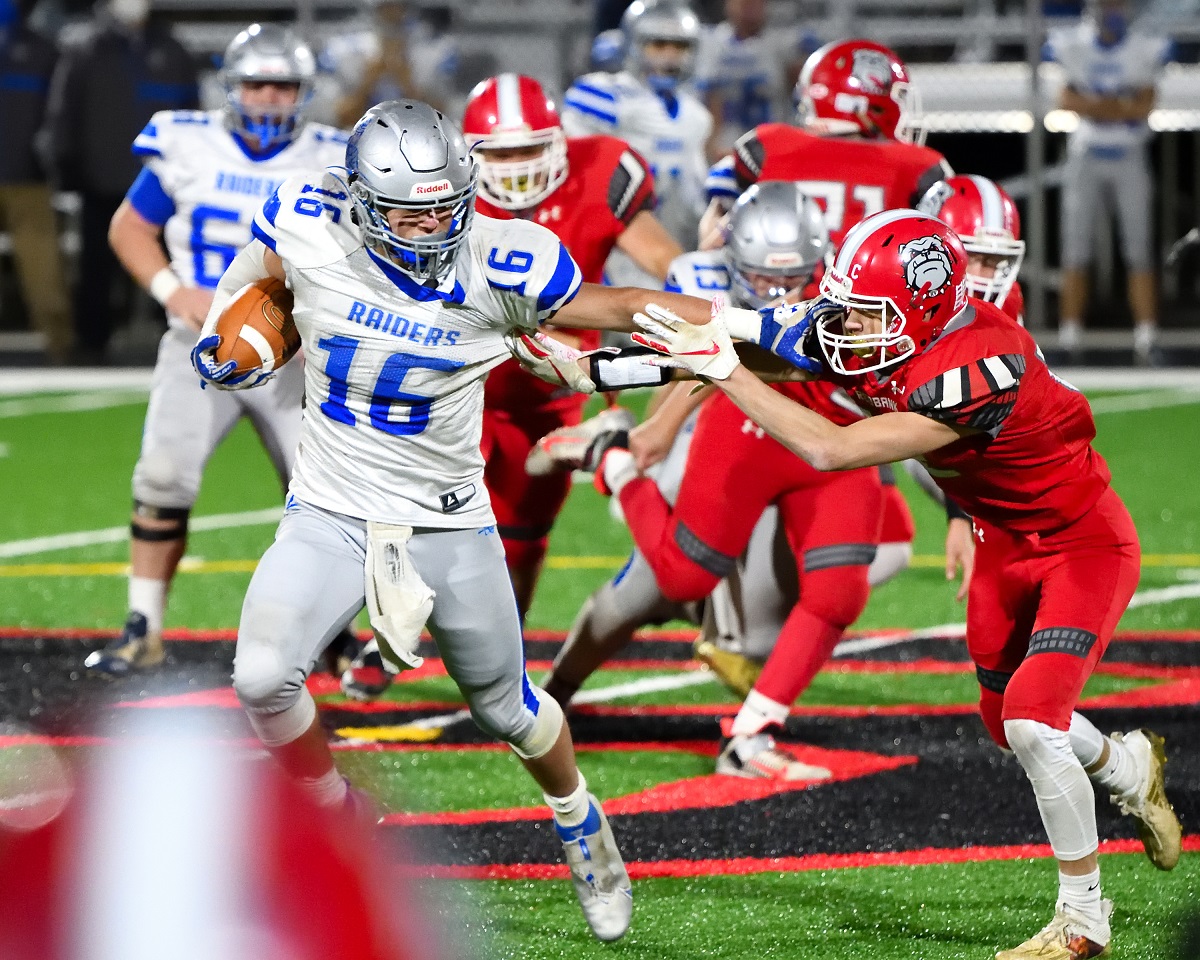 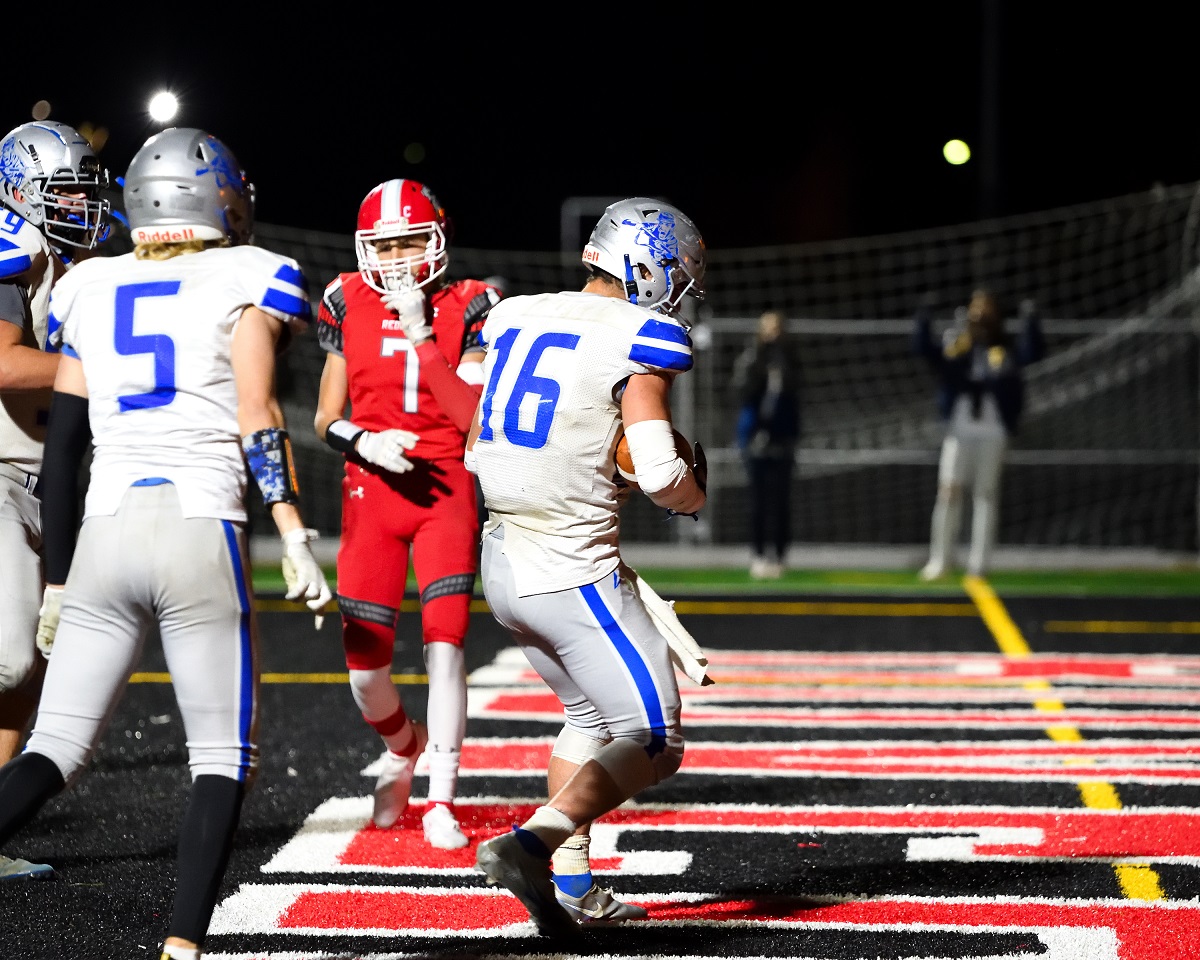 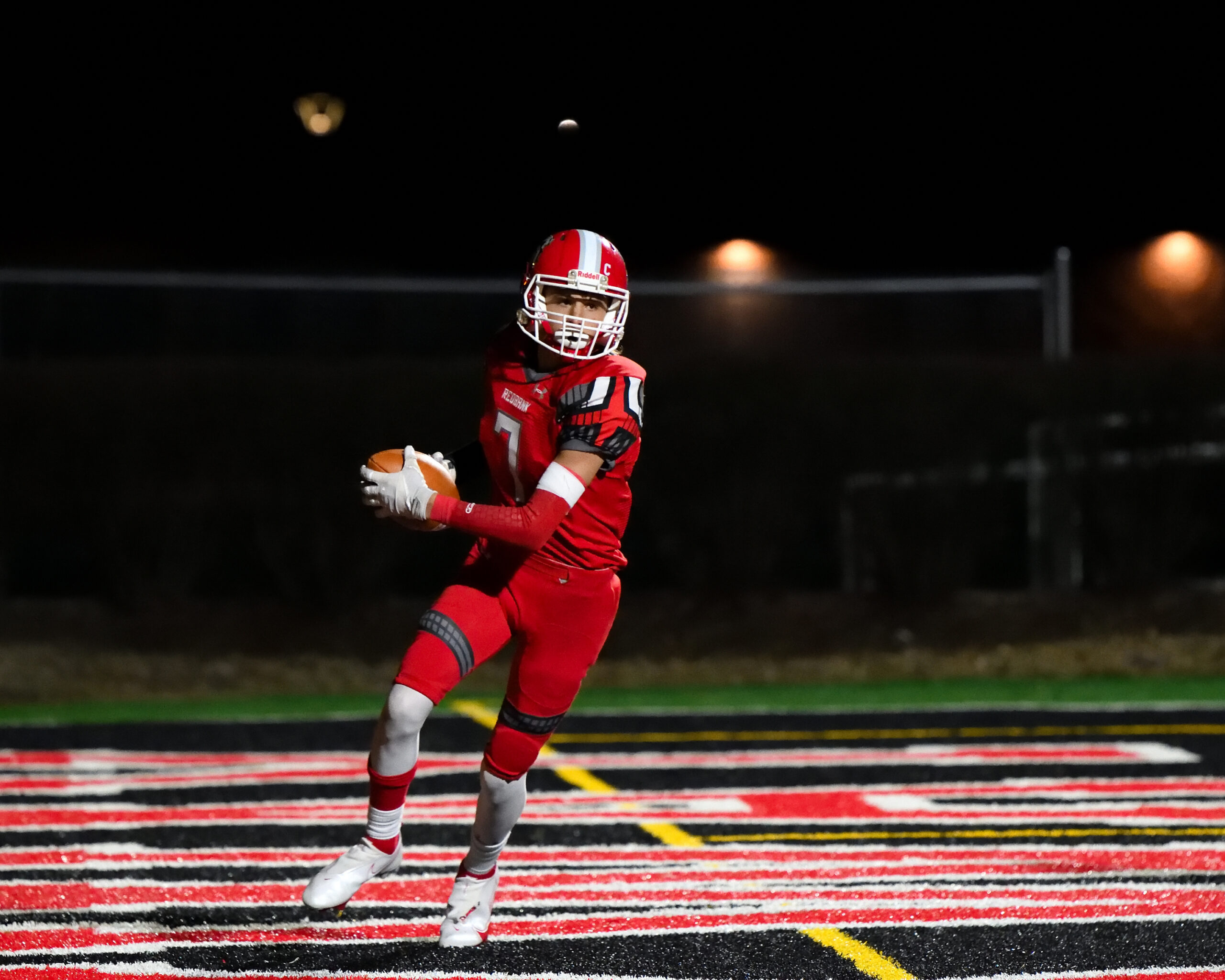 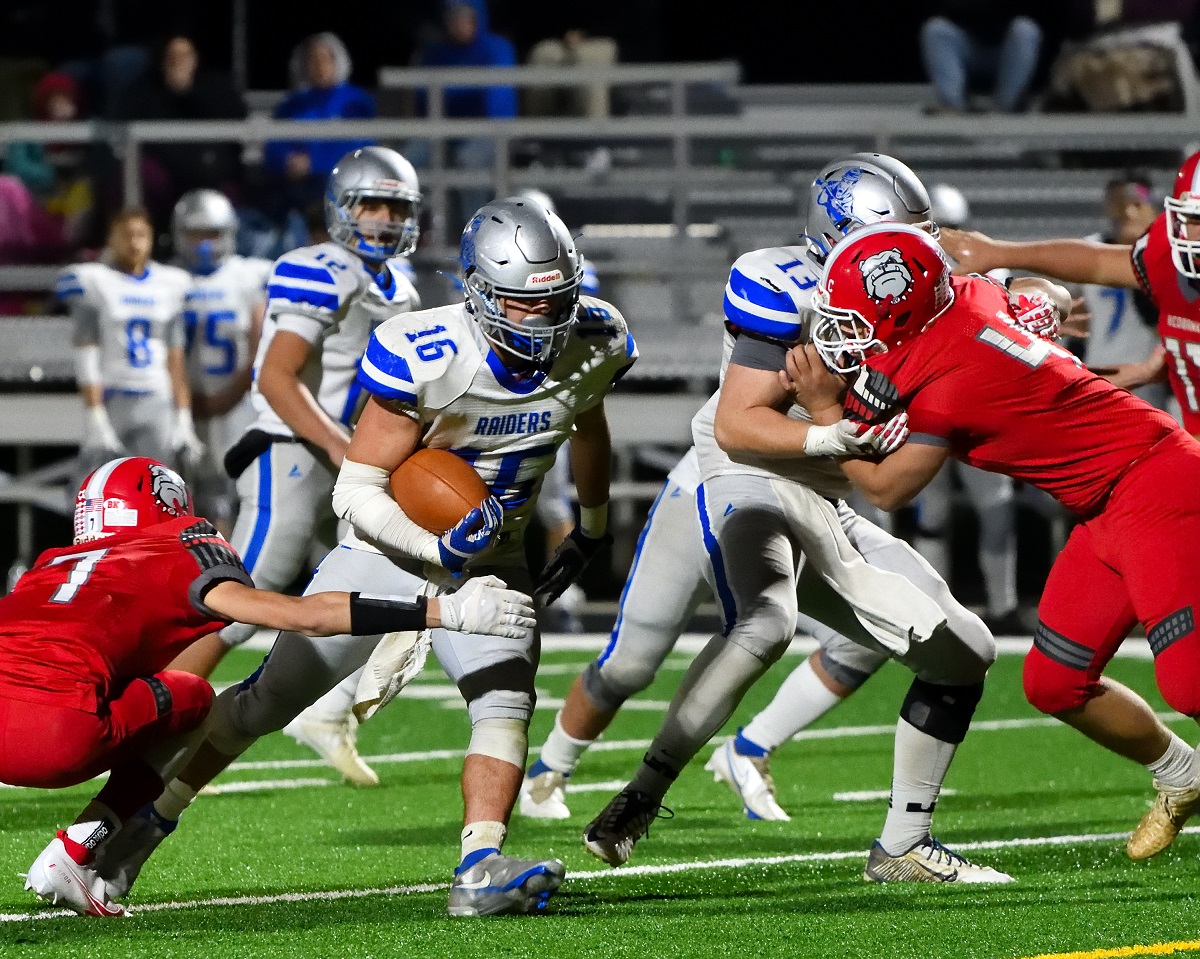 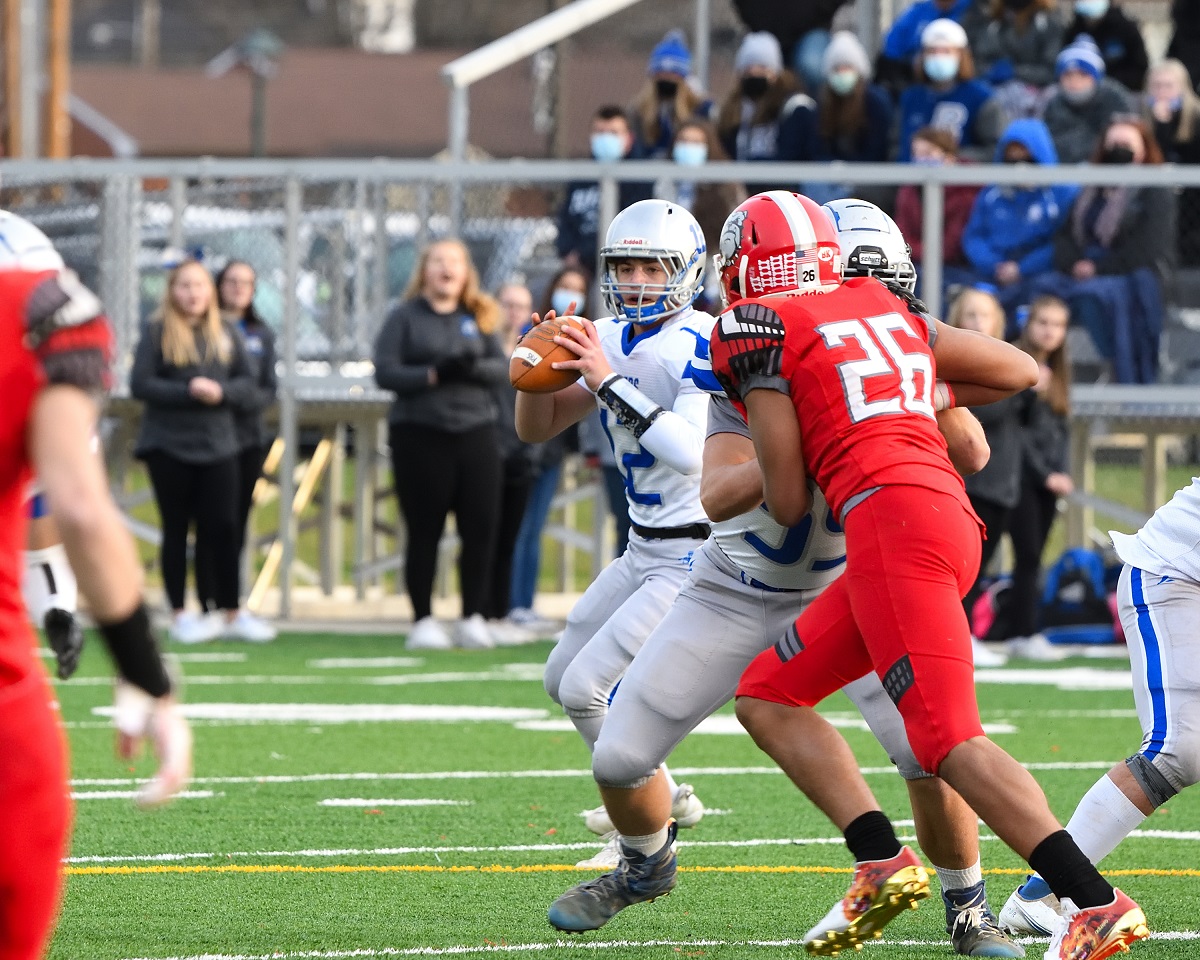 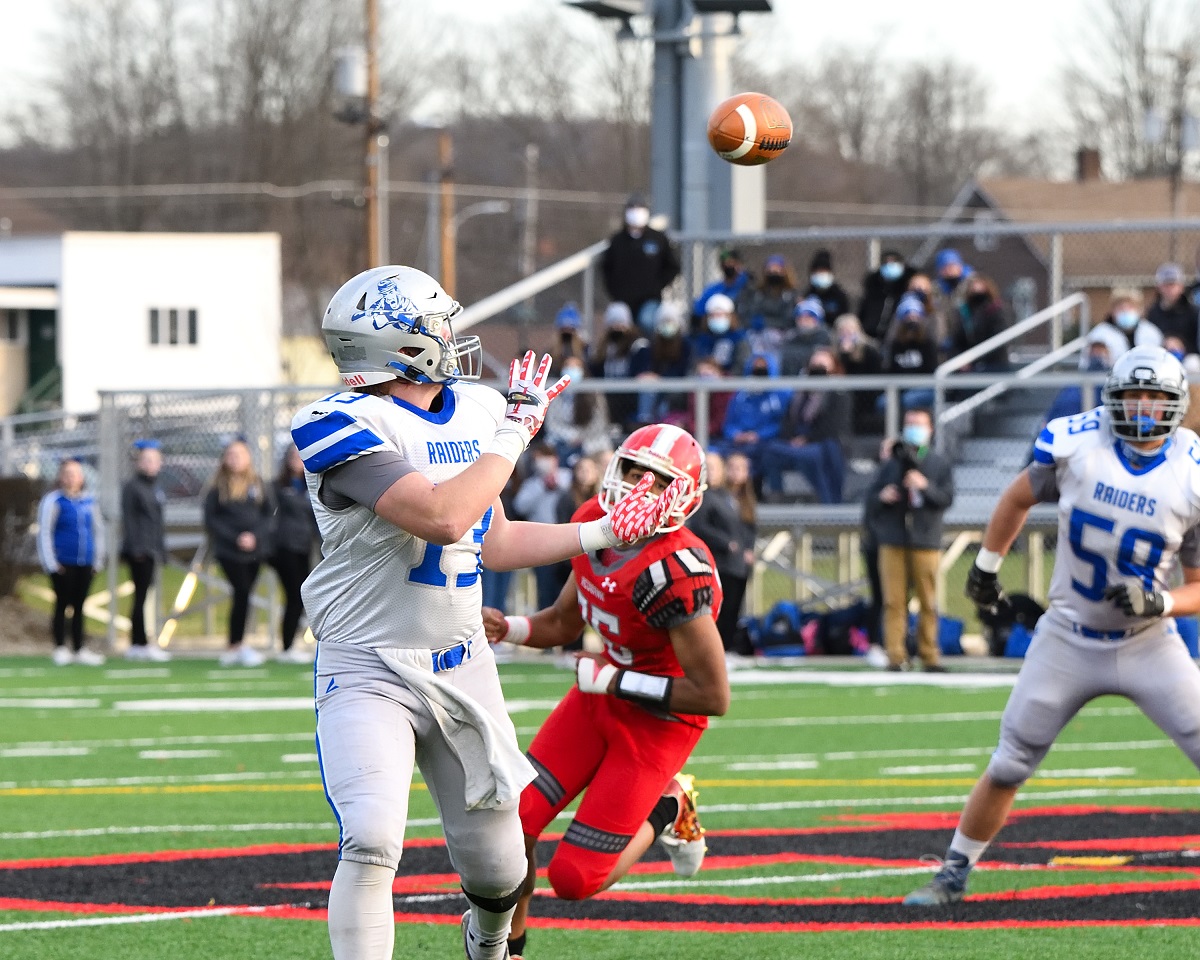 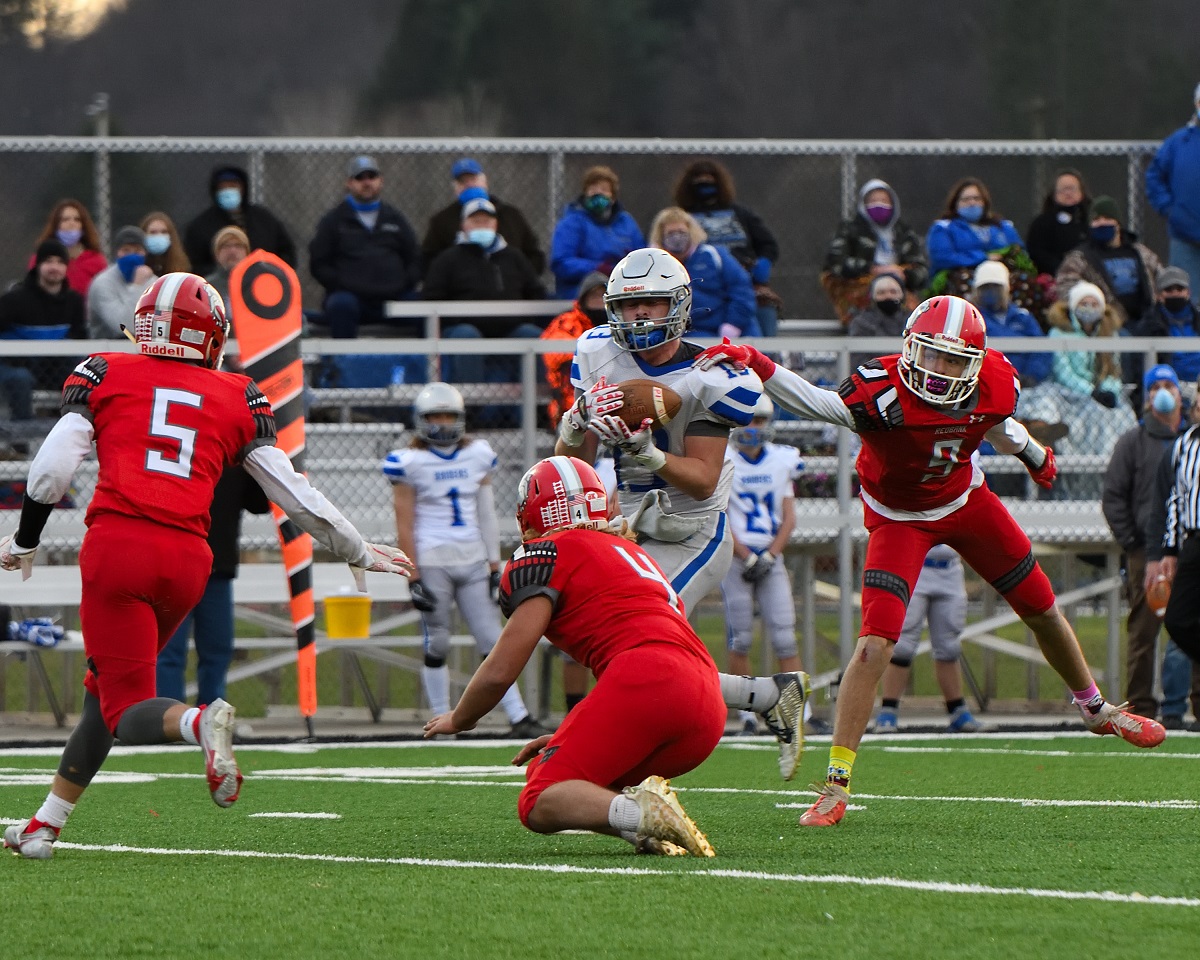 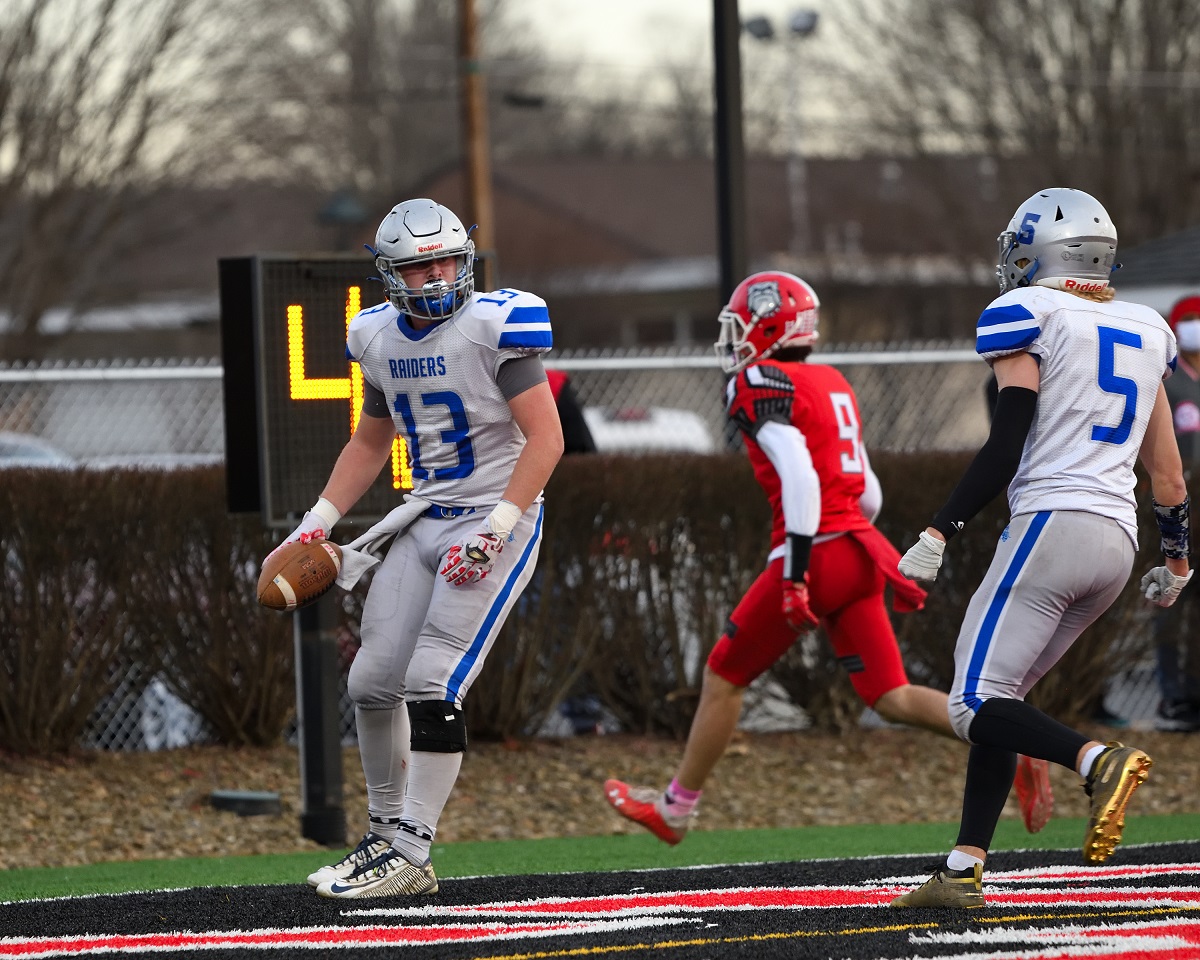 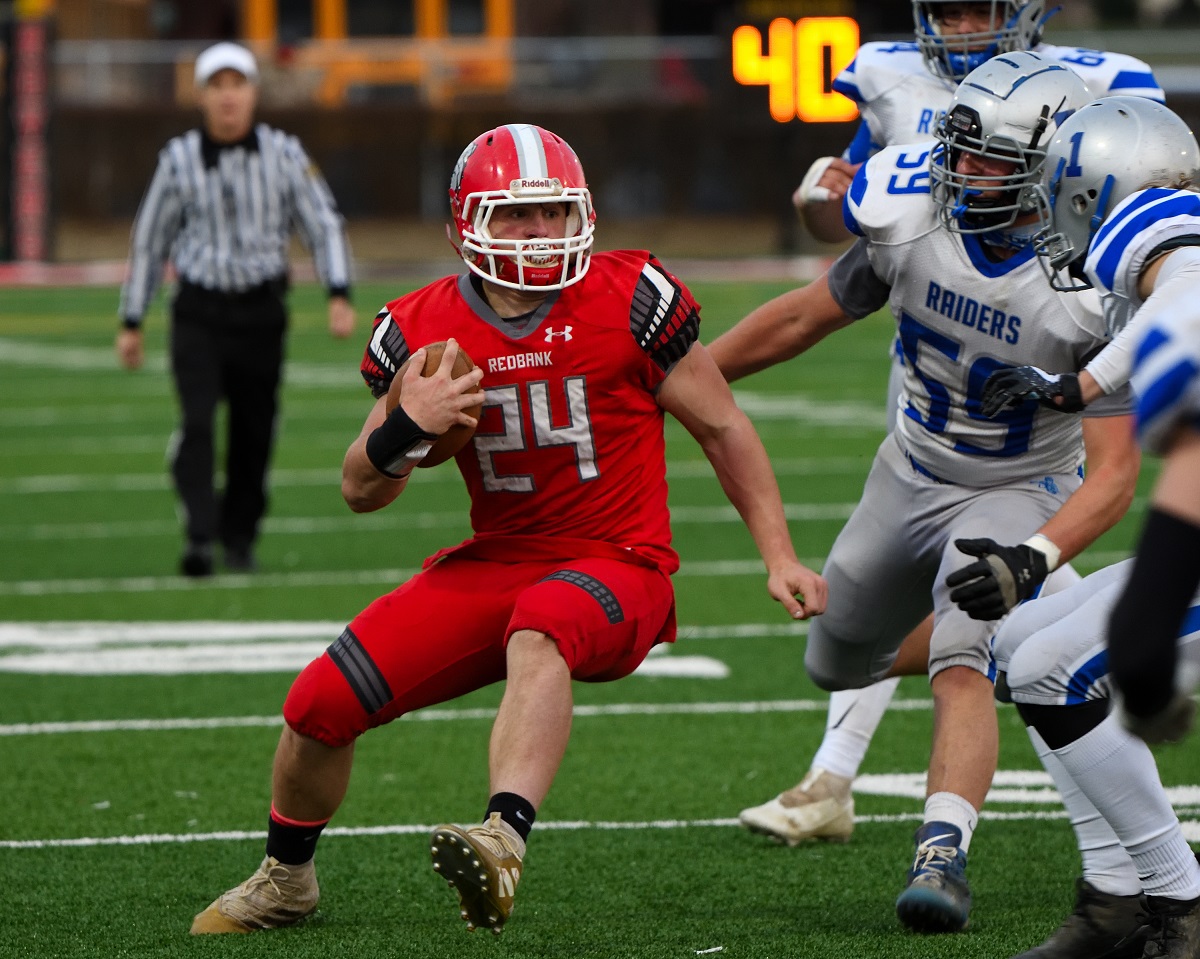 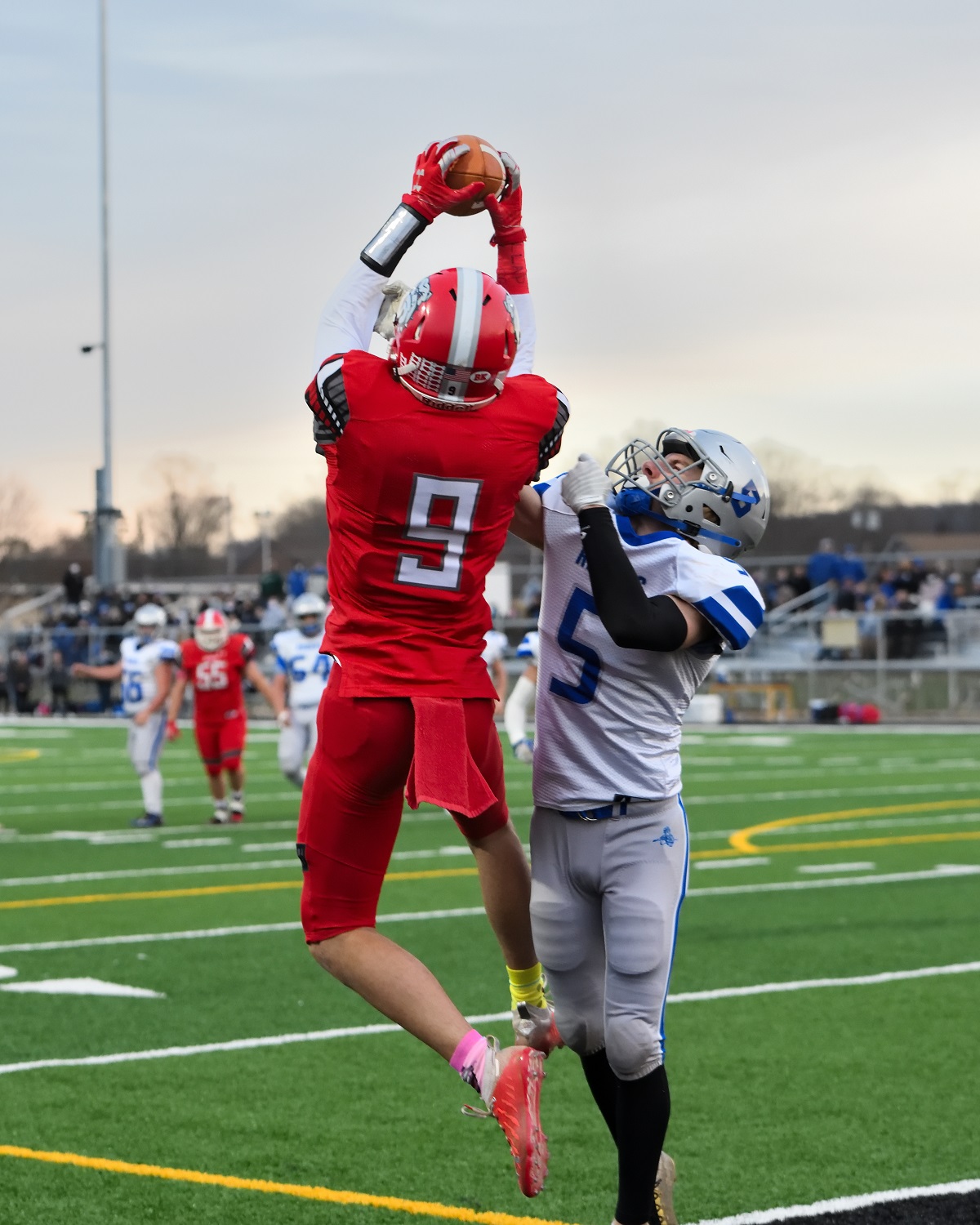 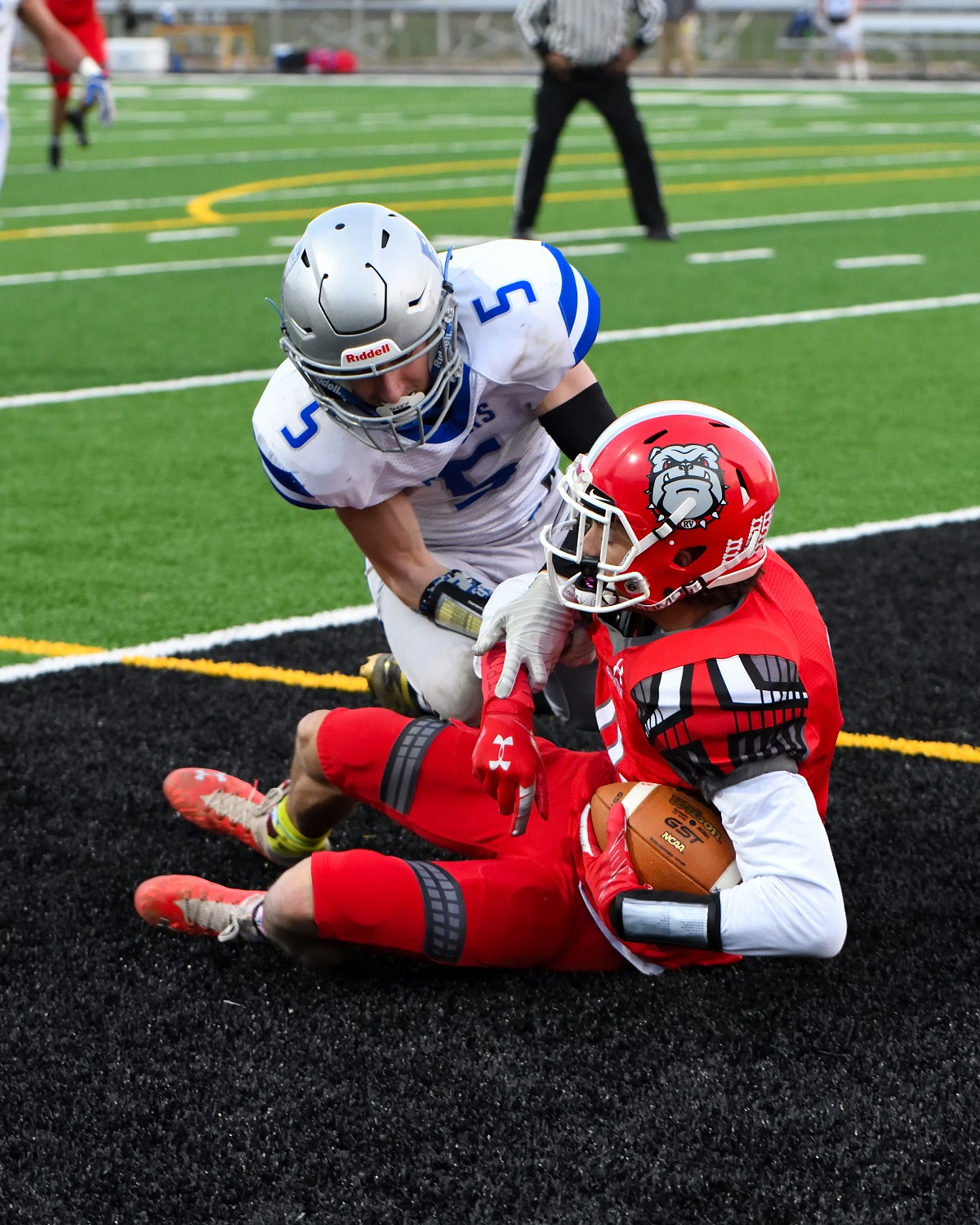