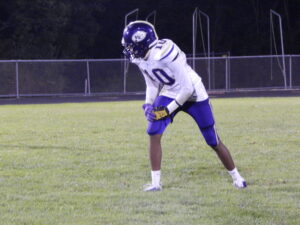 “I thought everybody contributed tonight,” said Karns City head coach Joe Sherwin. “We subbed a lot of guys, but everyone did their job and played their part. That is what we teach these guys, I thought we had good depth, and I think we showed that tonight.”

Kaden Scherer broke the ice for the Gremlins with a 61-yard punt return in the first quarter. While Austin Brown put the game on ice as he recovered a bad punt snap for a score, putting Karns City ahead 24-0.

“If anything could go wrong for us on special teams, I think it did tonight,” said Moniteau head coach Bob Rottman. “It was one of those games, as for the physicality of the game, I thought we were right there with them. They took advantage of our mistakes. They’re a good football team. I still believe we’re a great football team.”

“We were trying to figure out who was going to throw that pass,” said Sherwin. “He was the best thrower in practice; he made a great throw.”

Owen Collwell booted a 26-yard field goal, while Rupp snagged a 65-yard touchdown pass from Eric Booher that was sandwiched around Brown’s touchdown.

Moniteau was able to crack the scoreboard against Karns City’s junior varsity team as they went 74 yards in six plays capped by freshman Brady Thompson’s 30-yard touchdown to Caden Roxberry.

The Warriors finished the night with 170 yards of offense. However, 74 came on its final possession.

“I thought we did a pretty good job defensively, “said Sherwin. “It was our first game, and I thought our tackling could have been better, but when they went to the spread, I thought we defended it well. We were able to get a turnover, run, and pass. We did well tonight.”

Mason Mershimer led Moniteau with 57 yards rushing while also catching two passes for 35 yards. Thompson was 6-of-15 for 83 yards, with a touchdown and an interception.

“All-in-all, it’s disappointing, and we have to eat it,” said Rottman. “We’ll get over this one and be ready to play next week at Punxsutawney. We never lost the effort tonight, and that’s the key.”

Karns City had a balanced attack, rushing for 117 yards while also throwing for 166.

Booher led the way for the Gremlins passing for 99 yards completing 3-of-6 attempts. He also rushed for seven yards. Christie also went 3-for-6 passing for 32 yards and a touchdown, while adding 28 yards on the ground.

Kaden Scherer added three catches for 48 yards, while Rupp had two for 67 and a pair of touchdowns.

“This is the way you want to come out to open the season,” said Sherwin. “We have to keep working hard, learn from our mistakes, and correct them.”

Both teams are in action again next Friday night as Moniteau travels to Punxsutawney. At the same time, Karns City heads to Brookville.