Around the 717 for more District 3 playoff matchups 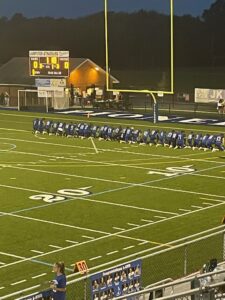 Only two teams remain in the playoffs for the Lancaster Lebanon League after Hempfield, Donegal, Cocalico, Warwick and Manheim Central all went down last week. The Wilson Bulldogs and LS Pioneers are the last ones standing and both are riding multi game winning streaks.

To say the Pioneers have been cruising since Week 1 would be an understatement, as they have defeated their last 10 opponents by an average margin of over 37 points. With the exception of their game against Solanco (They won 28-14), no opponent has really given them much of a challenge this season. That being said the Kennard Dale Rams are having themselves an historic season and come into this on a 10 game winning streak also. The Rams last week won their first playoff game in school history knocking off Donegal in a slug-fest 28-14.

This District 3 4A Semifinal match up will feature two of the best defenses in the league and very similar rushing attacks. We have talked at length in particular about the outstanding Pioneers defense, but we have not mentioned their superb quarterback Berkeley Wagner and the year he is having. On the season Berkeley has 16 touchdown passes and leads his team in rushing with 754 yards on the ground. The Senior quarterback stopped in for a quick interview to discuss his teams winning streak, his plans after high school and what to expect this Friday:

Me: Coming into this season with a new head coach and several new starters, what has been the mindset of Coach Ridenour and his staff to stay focused?

Berkeley Wagner: I think the biggest focal point has just been too take it week by week Especially with so many young guys getting them ready for whoever is up next. Also, just not looking ahead.

CF: Your defense may be one of the best in the entire state, while your offense is quietly having another outstanding year, is there any competition between both sides during practice?

BW: For the most part we have a lot of two way guys, around 5 or 6, so for the other 5 or so they continue to give us great looks on scout team. Even the kids who don’t start give us tremendous looks and when they do that it makes Fridays a whole lot easier.

CF: What are your plans for after Football? (Are you looking to play in college, any schools in particular)

BW: I am still on the fence about college football, I am being recruited by a couple local D3 schools and a few psac schools. After the season I will probably make a decision whether or not to play in college.

CF: This is the first time you are facing Kennard-Dale, what can you tell us that our audience may not know about them?

BW: From what I can see so far on film: They are big, strong, and fast. When you have the combination of those 3 things you have the makeup of a really really good football team. If you add on the fact that they are having a historic season, you can figure out that they’re bringing a very talented, well-coached, and hungry team on Friday.

CF: You are a dual threat quarterback, what style do you prefer? Any particular play that you love?

BW: Honestly, it just depends on the game. Sometimes I’d rather throw the ball sometimes I’d rather run it. Before the end of last year I was not really a quarterback so the natural tendency to run is still there but coach Ridenour has done a tremendous job of turning me into someone who can run and throw. I love any play that my first read is #88 Beau Heyser because wherever I throw that ball he’s going to go catch it.

I will be covering this semifinal tilt for up to date action follow me on twitter @carljfred.

In one of the best games in recent memory, the Wilson Bulldogs shocked the Central York Panthers with their ground and pound offense and opportunistic defense. The Bulldogs were able to somewhat limit Beau Pribula defensively as they blitzed him all night long accounting for 4 sacks. Pribula who was still terrific (308 yards passing, 1 Touchdown) fell victim to a number of drops and a tipped pass that Wilson Defensive Back Gannon Brubaker snagged right before it hit the ground for an interception.

Jadyn Jones and Brad Hoffman were once again both terrific accounting for over 2/3 of thee teams total yards offensively. Wilson is certainly not flashy, they ground and pound you to death with nothing fancy, just consistently moving the chains and running the clock week after week. If they do get out in front of the Harrisburg this Saturday, look for them to keep the high powered Cougars offense off the field as much as possible.

My final score prediction for this game: Wilson 28 Harrisburg 21

– The Warwick Warriors, they could of easily just mailed it in knowing that they had the unfortunate task of facing one of the best teams statewide in Governor Mifflin. Instead they battled until the final whistle and have been the only team all season to score 30 plus points on the Mustangs.

– Hempfield’s roller coaster of a season came to an end last Saturday against Harrisburg, but they certainly gained a lot of respect around the league. Playing one of the toughest schedules in the LL, this Black Knight squad never quit, Coach Eager is building something special over in Landisville.

– Berks Catholic did one the best jobs of containing League Leader Rusher Anthony Bourassa this season, holding him to 99 yards on on 29 carries. The Saints were only the second team all season (Governor Mifflin being the other) to hold Bourassa under 100 yards rushing. They will face top seeded Bishop Mcdevitt in the other Semi-final 4A match-up on Friday.

– The Donegal Indians overcame a lot this season, from injuries to covid issues, it is quite the accomplishment for them to finish with a 7-3 record. Coach Risberg’s squad was the only team all season that were able to somewhat slow-down Offensive Player of the year candidate Robert Footman. While Footman was his typical great self (300 yards passing, 2 touchdowns) Coach TJ Rudy’s defense were the only squad to keep him contained (I say that loosely, but you get the point). Donegal returns a number of starters next year, look for them to build on this playoff run and contend again next season.